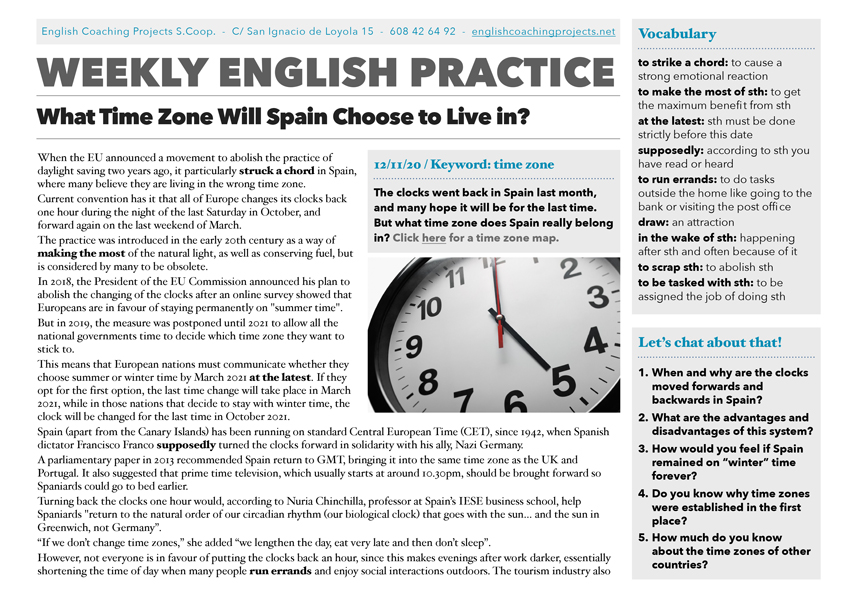 What Time Zone Will Spain Choose to Live in?

The clocks went back in Spain last month, and many hope it will be for the last time. But what time zone does Spain really belong in?

to strike a chord: to cause a strong emotional reaction

to make the most of sth: to get the maximum benefit from sth

at the latest: sth must be done strictly before this date

supposedly: according to sth you have read or heard

to run errands: to do tasks outside the home like going to the bank or visiting the post office

in the wake of sth: happening after sth and often because of it

to scrap sth: to abolish sth

to be tasked with sth: to be assigned the job of doing sth

The clocks went back in Spain last month, and many hope it will be for the last time. But what time zone does Spain really belong in?

When the EU announced a movement to abolish the practice of daylight saving two years ago, it particularly struck a chord in Spain, where many believe they are living in the wrong time zone.

Current convention has it that all of Europe changes its clocks back one hour during the night of the last Saturday in October, and forward again on the last weekend of March.

The practice was introduced in the early 20th century as a way of making the most of the natural light, as well as conserving fuel, but is considered by many to be obsolete.

In 2018, the President of the EU Commission announced his plan to abolish the changing of the clocks after an online survey showed that Europeans are in favour of staying permanently on “summer time”.

But in 2019, the measure was postponed until 2021 to allow all the national governments time to decide which time zone they want to stick to.

This means that European nations must communicate whether they choose summer or winter time by March 2021 at the latest. If they opt for the first option, the last time change will take place in March 2021, while in those nations that decide to stay with winter time, the clock will be changed for the last time in October 2021.

Spain (apart from the Canary Islands) has been running on standard Central European Time (CET), since 1942, when Spanish dictator Francisco Franco supposedly turned the clocks forward in solidarity with his ally, Nazi Germany.

A parliamentary paper in 2013 recommended Spain return to GMT, bringing it into the same time zone as the UK and Portugal. It also suggested that prime time television, which usually starts at around 10.30pm, should be brought forward so Spaniards could go to bed earlier.

Turning back the clocks one hour would, according to Nuria Chinchilla, professor at Spain’s IESE business school, help Spaniards “return to the natural order of our circadian rhythm (our biological clock) that goes with the sun… and the sun in Greenwich, not Germany”.

“If we don’t change time zones,” she added “we lengthen the day, eat very late and then don’t sleep”.

However, not everyone is in favour of putting the clocks back an hour, since this makes evenings after work darker, essentially shortening the time of day when many people run errands and enjoy social interactions outdoors. The tourism industry also argues that the extra hour of evening sun is a draw for visitors.

In the wake of the EU decision, Spain approved the creation of a commission of experts to study the consequences of scrapping the hour change and settling permanently on either summer or winter time.

A group of 14 experts are preparing reports on how Spaniards could be adversely affected, especially those in the most vulnerable population groups. They are also tasked with looking at how the different schedules influence social, environmental and economic sustainability.

What will they decide? Only time will tell.

Let’s chat about your time zone!

Punctuality is the thief of time