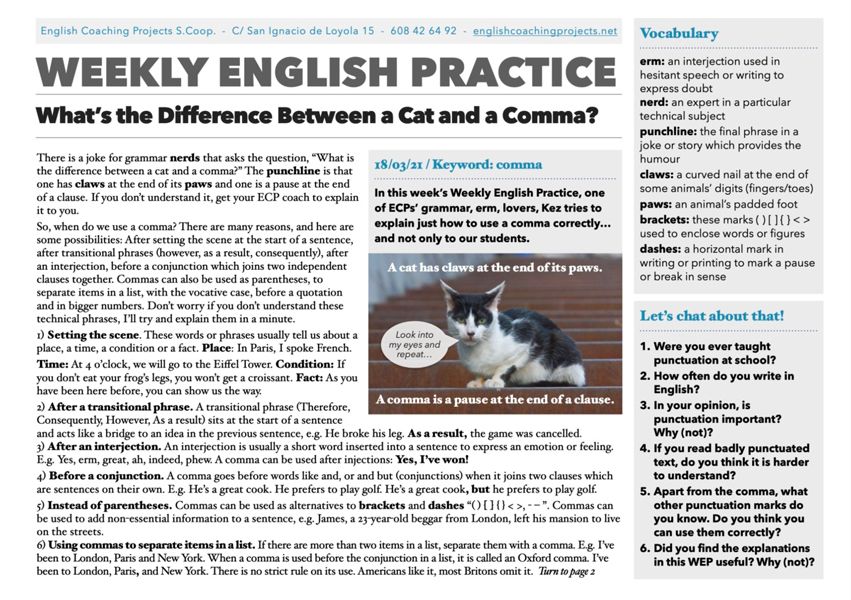 What’s the Difference Between a Cat and a Comma?

In this week’s Weekly English Practice, one of ECPs’ grammar, erm, lovers, Kez tries to explain just how to use a comma correctly… and not only to our students.

erm: an interjection used in hesitant speech or writing to express doubt
nerd: an expert in a particular technical subject

punchline: the final phrase in a joke or story which provides the humour

claws: a curved nail at the end of some animals’ digits (fingers/toes)

dashes: a horizontal mark in writing or printing to mark a pause or break in sense

In this week’s Weekly English Practice, one of ECPs’ grammar, erm, lovers, Kez tries to explain just how to use a comma correctly… and not only to our students.

There is a joke for grammar nerds that asks the question, “What is the difference between a cat and a comma?” The punchline is that one has claws at the end of its paws and one is a pause at the end of a clause. If you don’t understand it, get your ECP coach to explain it to you.

So, when do we use a comma? There are many reasons, and here are some possibilities: After setting the scene at the start of a sentence, after transitional phrases (however, as a result, consequently), after an interjection, before a conjunction which joins two independent clauses together. Commas can also be used as parentheses, to separate items in a list, with the vocative case, before a quotation and in bigger numbers. Don’t worry if you don’t understand these technical phrases, I’ll try and explain them in a minute.

1) Setting the scene. These words or phrases usually tell us about a place, a time, a condition or a fact.

Place: In Paris, I spoke French.

Time: At 4 o’clock, we will go to the Eiffel Tower.

Condition: If you don’t eat your frog’s legs, you won’t get a croissant.

Fact: As you have been here before, you can show us the way.

3) After an interjection. An interjection is usually a short word inserted into a sentence to express an emotion or feeling. E.g. Yes, erm, great, ah, indeed, phew. A comma can be used after injections: Yes, I’ve won!

5) Instead of parentheses. Commas can be used as alternatives to brackets and dashes “( ) [ ] { } < >, – – ”. Commas can be used to add non-essential information to a sentence, e.g. James, a 23-year-old beggar from London, left his mansion to live on the streets.

7) Commas before a quotation. Commas can be used to introduce a quotation. E.g. The dinner lady said, “It’s too wet to play outside.”

8) The vocative case. When addressing someone directly, you should separate the name being used (e.g. John, Mary, my darling, my son) from the rest of the sentence by using a comma. For example: Rebecca, put your hand up if you don’t understand.

There are also other reasons to use commas that I haven’t included in this article. If you’re still unsure of how to use commas, don’t be afraid to use the internet to find out, or you can put your ECP coach to the test by asking them!

Let’s chat about how to use a comma!

How To Be Pedantic

Reading to learn is no walk in the park