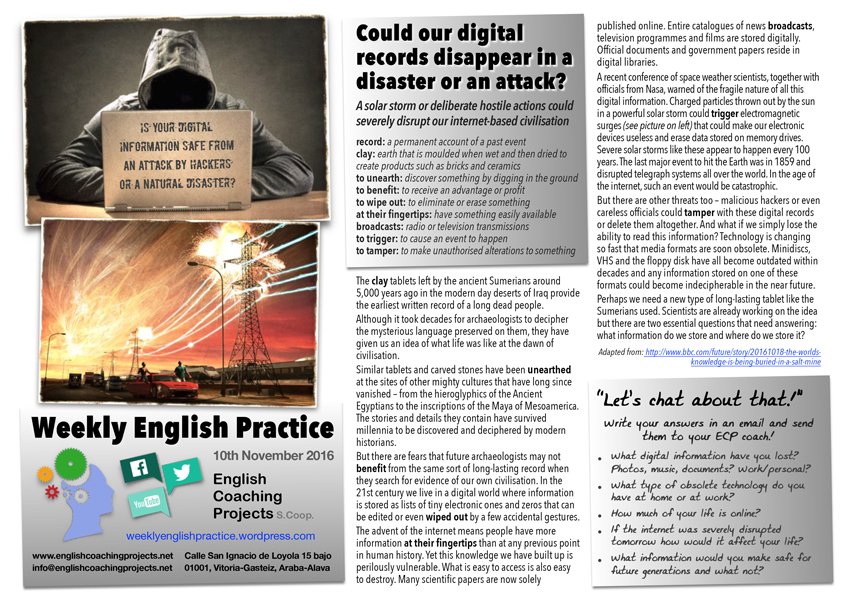 clay: earth that is moulded when wet and then dried to create products such as bricks and ceramics

to unearth: discover something by digging in the ground

to benefit: to receive an advantage or profit

to wipe out: to eliminate or erase something

at their fingertips: have something easily available

to trigger: to cause an event to happen

to tamper: to make unauthorised alterations to something

The clay tablets left by the ancient Sumerians around 5,000 years ago in the modern day deserts of Iraq provide the earliest written record of a long dead people.

Although it took decades for archaeologists to decipher the mysterious language preserved on them, they have given us an idea of what life was like at the dawn of civilisation.

Similar tablets and carved stones have been unearthed at the sites of other mighty cultures that have long since vanished – from the hieroglyphics of the Ancient Egyptians to the inscriptions of the Maya of Mesoamerica. The stories and details they contain have survived millennia to be discovered and deciphered by modern historians.

But there are fears that future archaeologists may not benefit from the same sort of long-lasting record when they search for evidence of our own civilisation. In the 21st century we live in a digital world where information is stored as lists of tiny electronic ones and zeros that can be edited or even wiped out by a few accidental gestures.

The advent of the internet means people have more information at their fingertips than at any previous point in human history. Yet this knowledge we have built up is perilously vulnerable. What is easy to access is also easy to destroy. Many scientific papers are now solely published online. Entire catalogues of news broadcasts, television programmes and films are stored digitally. Official documents and government papers reside in digital libraries.

A recent conference of space weather scientists, together with officials from Nasa, warned of the fragile nature of all this digital information. Charged particles thrown out by the sun in a powerful solar storm could trigger electromagnetic surges (see picture on left) that could make our electronic devices useless and erase data stored on memory drives. Severe solar storms like these appear to happen every 100 years. The last major event to hit the Earth was in 1859 and disrupted telegraph systems all over the world. In the age of the internet, such an event would be catastrophic.

But there are other threats too – malicious hackers or even careless officials could tamper with these digital records or delete them altogether. And what if we simply lose the ability to read this information? Technology is changing so fast that media formats are soon obsolete. Minidiscs, VHS and the floppy disk have all become outdated within decades and any information stored on one of these formats could become indecipherable in the near future.

Perhaps we need a new type of long-lasting tablet like the Sumerians used. Scientists are already working on the idea but there are two essential questions that need answering: what information do we store and where do we store it?