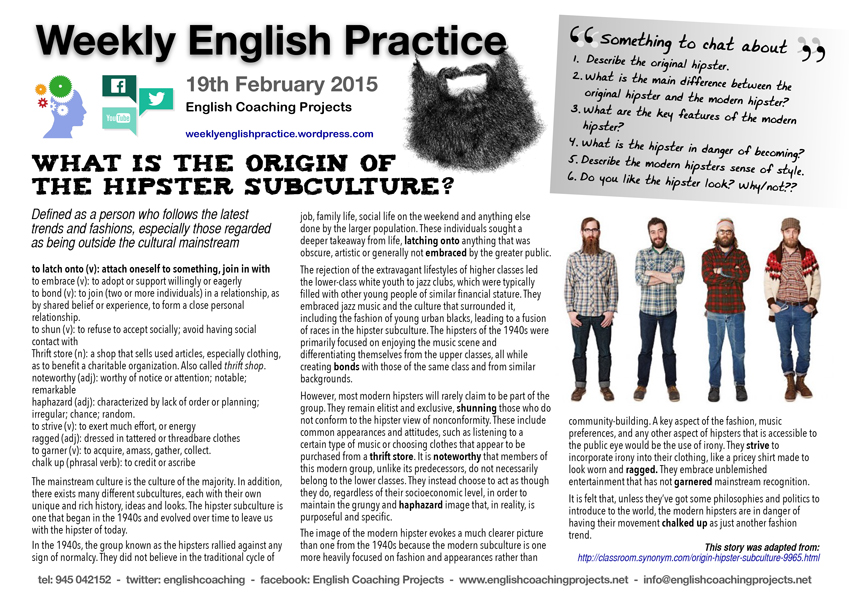 to latch onto (v): attach oneself to something, join in with

to embrace (v): to adopt or support willingly or eagerly

to bond (v): to join (two or more individuals) in a relationship, as by shared belief or experience, to form a close personal relationship.

to shun (v): to refuse to accept socially; avoid having social contact with

to strive (v): to exert much effort, or energy

chalk up (phrasal verb): to credit or ascribe

Defined as a person who follows the latest trends and fashions, especially those regarded as being outside the cultural mainstream

The mainstream culture is the culture of the majority. In addition, there exists many different subcultures, each with their own unique and rich history, ideas and looks. The hipster subculture is one that began in the 1940s and evolved over time to leave us with the hipster of today.

In the 1940s, the group known as the hipsters rallied against any sign of normalcy. They did not believe in the traditional cycle of job, family life, social life on the weekend and anything else done by the larger population. These individuals sought a deeper takeaway from life, latching onto anything that was obscure, artistic or generally not embraced by the greater public.

The rejection of the extravagant lifestyles of higher classes led the lower-class white youth to jazz clubs, which were typically filled with other young people of similar financial stature. They embraced jazz music and the culture that surrounded it, including the fashion of young urban blacks, leading to a fusion of races in the hipster subculture. The hipsters of the 1940s were primarily focused on enjoying the music scene and differentiating themselves from the upper classes, all while creating bonds with those of the same class and from similar backgrounds.

However, most modern hipsters will rarely claim to be part of the group. They remain elitist and exclusive, shunning those who do not conform to the hipster view of nonconformity. These include common appearances and attitudes, such as listening to a certain type of music or choosing clothes that appear to be purchased from a thrift store. It is noteworthy that members of this modern group, unlike its predecessors, do not necessarily belong to the lower classes. They instead choose to act as though they do, regardless of their socioeconomic level, in order to maintain the grungy and haphazard image that, in reality, is purposeful and specific.

community-building. A key aspect of the fashion, music preferences, and any other aspect of hipsters that is accessible to the public eye would be the use of irony. They strive to incorporate irony into their clothing, like a pricey shirt made to look worn and ragged. They embrace unblemished entertainment that has not garnered mainstream recognition.

It is felt that, unless they’ve got some philosophies and politics to introduce to the world, the modern hipsters are in danger of having their movement chalked up as just another fashion trend.

This story was adapted from: http://classroom.synonym.com/origin-hipster-subculture-9965.html