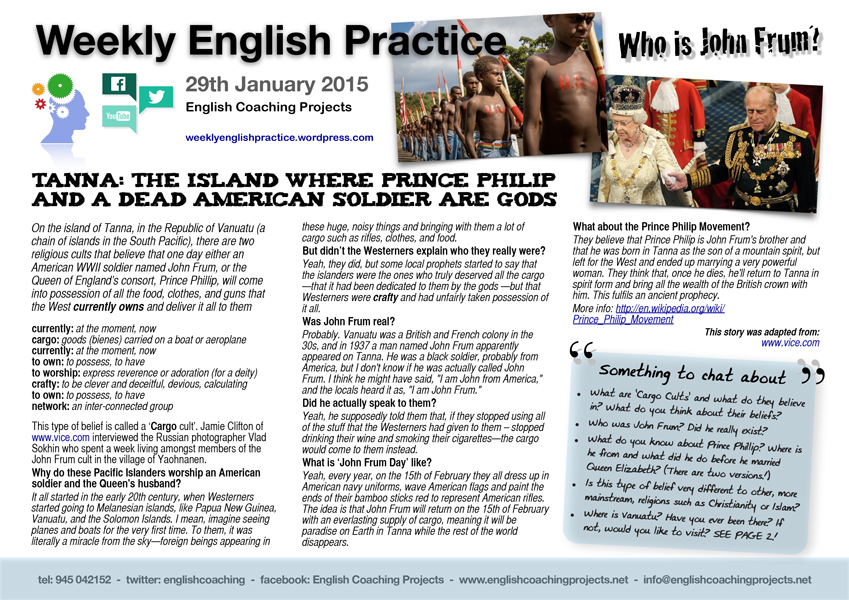 Tanna: The Island Where Prince Philip and a Dead American Soldier Are Gods

currently: at the moment, now

cargo: goods (bienes) carried on a boat or aeroplane

currently: at the moment, now

to own: to possess, to have

to worship: express reverence or adoration (for a deity)

crafty: to be clever and deceitful, devious, calculating

to own: to possess, to have

On the island of Tanna, in the Republic of Vanuatu (a chain of islands in the South Pacific), there are two religious cults that believe that one day either an American WWII soldier named John Frum, or the Queen of England’s consort, Prince Phillip, will come into possession of all the food, clothes, and guns that the West currently owns and deliver it all to them

This type of belief is called a ‘Cargo cult’. Jamie Clifton of www.vice.com interviewed the Russian photographer Vlad Sokhin who spent a week living amongst members of the John Frum cult in the village of Yaohnanen.

Why do these Pacific Islanders worship an American soldier and the Queen’s husband?

It all started in the early 20th century, when Westerners started going to Melanesian islands, like Papua New Guinea, Vanuatu, and the Solomon Islands. I mean, imagine seeing planes and boats for the very first time. To them, it was literally a miracle from the sky—foreign beings appearing in these huge, noisy things and bringing with them a lot of cargo such as rifles, clothes, and food.

But didn’t the Westerners explain who they really were?

Yeah, they did, but some local prophets started to say that the islanders were the ones who truly deserved all the cargo—that it had been dedicated to them by the gods —but that Westerners were crafty and had unfairly taken possession of it all.

Probably. Vanuatu was a British and French colony in the 30s, and in 1937 a man named John Frum apparently appeared on Tanna. He was a black soldier, probably from America, but I don’t know if he was actually called John Frum. I think he might have said, “I am John from America,” and the locals heard it as, “I am John Frum.”

Did he actually speak to them?

Yeah, he supposedly told them that, if they stopped using all of the stuff that the Westerners had given to them – stopped drinking their wine and smoking their cigarettes—the cargo would come to them instead.

Yeah, every year, on the 15th of February they all dress up in American navy uniforms, wave American flags and paint the ends of their bamboo sticks red to represent American rifles. The idea is that John Frum will return on the 15th of February with an everlasting supply of cargo, meaning it will be paradise on Earth in Tanna while the rest of the world disappears.

What about the Prince Philip Movement?

They believe that Prince Philip is John Frum’s brother and that he was born in Tanna as the son of a mountain spirit, but left for the West and ended up marrying a very powerful woman. They think that, once he dies, he’ll return to Tanna in spirit form and bring all the wealth of the British crown with him. This fulfils an ancient prophecy.

Something to chat (and write about) about

This story was adapted from: www.vice.com