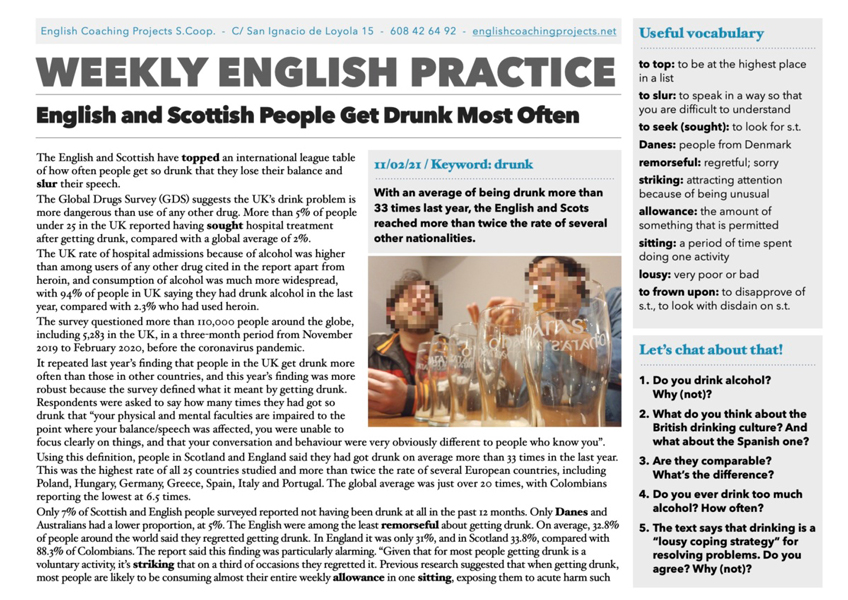 With an average of being drunk more than 33 times last year, the English and Scots reached more than twice the rate of several other nationalities.

to top: to be at the highest place in a list

to slur: to speak in a way so that you are difficult to understand

striking: attracting attention because of being unusual

allowance: the amount of something that is permitted

sitting: a period of time spent doing one activity

to frown upon: to disapprove of s.t., to look with disdain on s.t.

With an average of being drunk more than 33 times last year, the English and Scots reached more than twice the rate of several other nationalities.

The English and Scottish have topped an international league table of how often people get so drunk that they lose their balance and slur their speech.

The Global Drugs Survey (GDS) suggests the UK’s drink problem is more dangerous than use of any other drug. More than 5% of people under 25 in the UK reported having sought hospital treatment after getting drunk, compared with a global average of 2%.

The UK rate of hospital admissions because of alcohol was higher than among users of any other drug cited in the report apart from heroin, and consumption of alcohol was much more widespread, with 94% of people in UK saying they had drunk alcohol in the last year, compared with 2.3% who had used heroin.

The survey questioned more than 110,000 people around the globe, including 5,283 in the UK, in a three-month period from November 2019 to February 2020, before the coronavirus pandemic.

It repeated last year’s finding that people in the UK get drunk more often than those in other countries, and this year’s finding was more robust because the survey defined what it meant by getting drunk. Respondents were asked to say how many times they had got so drunk that “your physical and mental faculties are impaired to the point where your balance/speech was affected, you were unable to focus clearly on things, and that your conversation and behaviour were very obviously different to people who know you”.

Using this definition, people in Scotland and England said they had got drunk on average more than 33 times in the last year. This was the highest rate of all 25 countries studied and more than twice the rate of several European countries, including Poland, Hungary, Germany, Greece, Spain, Italy and Portugal. The global average was just over 20 times, with Colombians reporting the lowest at 6.5 times.

Only 7% of Scottish and English people surveyed reported not having been drunk at all in the past 12 months. Only Danes and Australians had a lower proportion, at 5%. The English were among the least remorseful about getting drunk. On average, 32.8% of people around the world said they regretted getting drunk. In England it was only 31%, and in Scotland 33.8%, compared with 88.3% of Colombians. The report said this finding was particularly alarming. “Given that for most people getting drunk is a voluntary activity, it’s striking that on a third of occasions they regretted it. Previous research suggested that when getting drunk, most people are likely to be consuming almost their entire weekly allowance in one sitting, exposing them to acute harm such as accidents, trauma and suppression of their immune system.”

A separate study last year found that 48% of Britons said they had been drinking more since the start of the pandemic.

Prof Adam Winstock, the founder of the GDS, said: “We don’t have a culture that is honest about the impact of intoxication. Drinking is a lousy coping strategy.”

“British people have never really embraced moderation when it comes to drinking. While many other cultures regard alcohol as an accompaniment to a social event and frown upon public drunkenness, we’ve often embraced it as a cultural identity. The challenge is making people realise drinking a bit less does not make you boring. In fact, you’ll probably have a better night. It’s like as a country we need to leave our adolescence behind.”

Let’s chat about getting drunk!

A Wine Bottle That’s as Flat as a Book