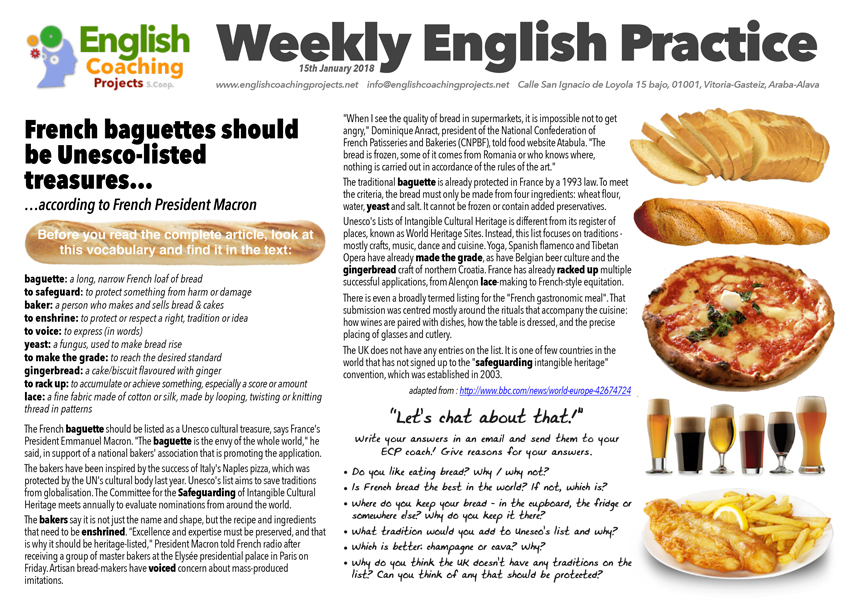 to safeguard: to protect something from harm or damage

baker: a person who makes and sells bread & cakes

to enshrine: to protect or respect a right, tradition or idea

to voice: to express (in words)

to make the grade: to reach the desired standard

gingerbread: a cake/biscuit flavoured with ginger

to rack up: to accumulate or achieve something, especially a score or amount

lace: a fine fabric made of cotton or silk, made by looping, twisting or knitting thread in patterns

The French baguette should be listed as a Unesco cultural treasure, says France’s President Emmanuel Macron. “The baguette is the envy of the whole world,” he said, in support of a national bakers’ association that is promoting the application.

The bakers have been inspired by the success of Italy’s Naples pizza, which was protected by the UN’s cultural body last year. Unesco’s list aims to save traditions from globalisation. The Committee for the Safeguarding of Intangible Cultural Heritage meets annually to evaluate nominations from around the world.

The bakers say it is not just the name and shape, but the recipe and ingredients that need to be enshrined. “Excellence and expertise must be preserved, and that is why it should be heritage-listed,” President Macron told French radio after receiving a group of master bakers at the Elysée presidential palace in Paris on Friday. Artisan bread-makers have voiced concern about mass-produced imitations.

“When I see the quality of bread in supermarkets, it is impossible not to get angry,” Dominique Anract, president of the National Confederation of French Patisseries and Bakeries (CNPBF), told food website Atabula. “The bread is frozen, some of it comes from Romania or who knows where, nothing is carried out in accordance of the rules of the art.”

The traditional baguette is already protected in France by a 1993 law. To meet the criteria, the bread must only be made from four ingredients: wheat flour, water, yeast and salt. It cannot be frozen or contain added preservatives.

Unesco’s Lists of Intangible Cultural Heritage is different from its register of places, known as World Heritage Sites. Instead, this list focuses on traditions – mostly crafts, music, dance and cuisine. Yoga, Spanish flamenco and Tibetan Opera have already made the grade, as have Belgian beer culture and the gingerbread craft of northern Croatia. France has already racked up multiple successful applications, from Alençon lace-making to French-style equitation.

There is even a broadly termed listing for the “French gastronomic meal”. That submission was centred mostly around the rituals that accompany the cuisine: how wines are paired with dishes, how the table is dressed, and the precise placing of glasses and cutlery.

The UK does not have any entries on the list. It is one of few countries in the world that has not signed up to the “safeguarding intangible heritage” convention, which was established in 2003.