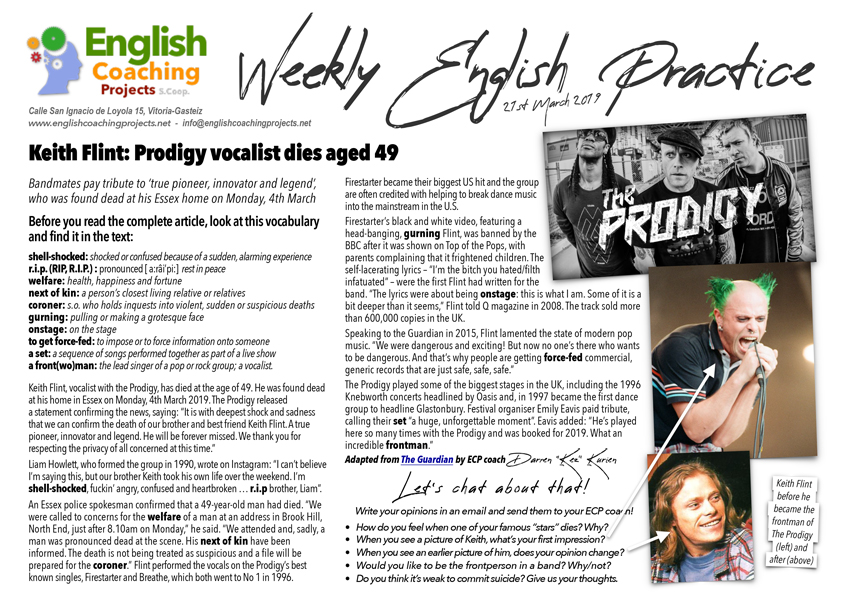 Bandmates pay tribute to ‘true pioneer, innovator and legend’, who was found dead at his Essex home on Monday, 4th March

shell-shocked: shocked or confused because of a sudden, alarming experience

next of kin: a person’s closest living relative or relatives

onstage: on the stage

to get force-fed: to impose or to force information onto someone

a set: a sequence of songs performed together as part of a live show

a front(wo)man: the lead singer of a pop or rock group; a vocalist.

Keith Flint, vocalist with the Prodigy, has died at the age of 49. He was found dead at his home in Essex on Monday, 4th March 2019. The Prodigy released a statement confirming the news, saying: “It is with deepest shock and sadness that we can confirm the death of our brother and best friend Keith Flint. A true pioneer, innovator and legend. He will be forever missed. We thank you for respecting the privacy of all concerned at this time.”

Liam Howlett, who formed the group in 1990, wrote on Instagram: “I can’t believe I’m saying this, but our brother Keith took his own life over the weekend. I’m shell-shocked, fuckin’ angry, confused and heartbroken … r.i.p brother, Liam”.

An Essex police spokesman confirmed that a 49-year-old man had died. “We were called to concerns for the welfare of a man at an address in Brook Hill, North End, just after 8.10am on Monday,” he said. “We attended and, sadly, a  man was pronounced dead at the scene. His next of kin have been informed. The death is not being treated as suspicious and a file will be prepared for the coroner.” Flint performed the vocals on the Prodigy’s best known singles, Firestarter and Breathe, which both went to No 1 in 1996. Firestarter became their biggest US hit and the group are often credited with helping to break dance music into the mainstream in the U.S.

Firestarter’s black and white video, featuring a head-banging, gurning Flint, was banned by the BBC after it was shown on Top of the Pops, with parents complaining that it frightened children. The self-lacerating lyrics – “I’m the bitch you hated/filth infatuated” – were the first Flint had written for the band. “The lyrics were about being onstage: this is what I am. Some of it is a bit deeper than it seems,” Flint told Q magazine in 2008. The track sold more than 600,000 copies in the UK.

Speaking to the Guardian in 2015, Flint lamented the state of modern pop music. “We were dangerous and exciting! But now no one’s there who wants to be dangerous. And that’s why people are getting force-fed commercial, generic records that are just safe, safe, safe.”

The Prodigy played some of the biggest stages in the UK, including the 1996 Knebworth concerts headlined by Oasis and, in 1997 became the first dance group to headline Glastonbury. Festival organiser Emily Eavis paid tribute, calling their set “a huge, unforgettable moment”. Eavis added: “He’s played here so many times with the Prodigy and was booked for 2019. What an incredible frontman.”

Adapted from The Guardian by ECP coach Darren “Kez” Kurien