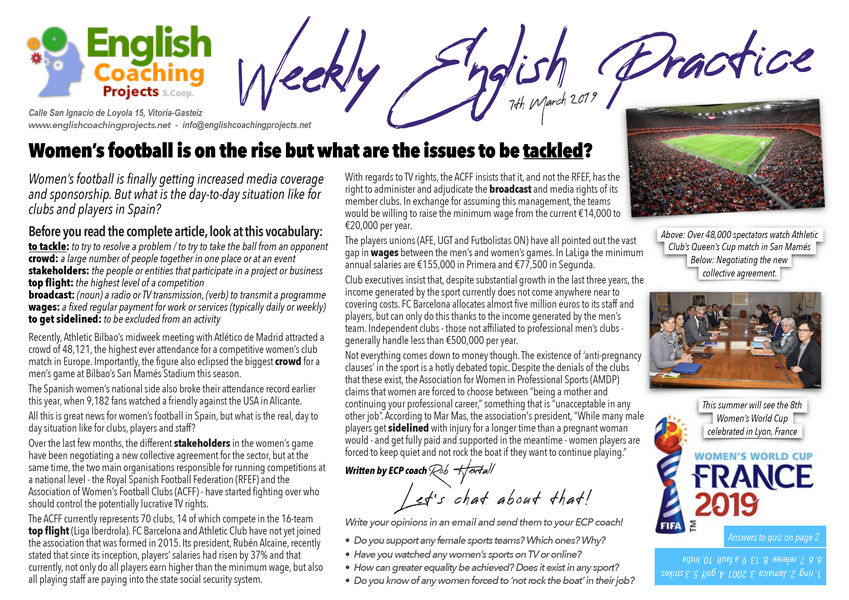 ECP coach Rob talks about the Association of Women’s Football Clubs (ACFF) and the current state of affairs of women’s football in Spain. To find out more, read this week’s Weekly English Practice!

Women’s football is finally getting increased media coverage and sponsorship. But what is the day-to-day situation like for clubs and players in Spain?

Before you read the complete article, look at this vocabulary:

to tackle: to try to resolve a problem / to try to take the ball from an opponent

crowd: a large number of people together in one place or at an event

stakeholders: the people or entities that participate in a project or business

top flight: the highest level of a competition

broadcast: (noun) a radio or TV transmission, (verb) to transmit a programme

wages: a fixed regular payment for work or services (typically daily or weekly)

to get sidelined: to be excluded from an activity

Recently, Athletic Bilbao’s midweek meeting with Atlético de Madrid attracted a crowd of 48,121, the highest ever attendance for a competitive women’s club match in Europe. Importantly, the figure also eclipsed the biggest crowd for a men’s game at Bilbao’s San Mamés Stadium this season.

The Spanish women’s national side also broke their attendance record earlier this year, when 9,182 fans watched a friendly against the USA in Alicante.

All this is great news for women’s football in Spain, but what is the real, day to day situation like for clubs, players and staff?

Over the last few months, the different stakeholders in the women’s game have been negotiating a new collective agreement for the sector, but at the same time, the two main organisations responsible for running competitions at a national level – the Royal Spanish Football Federation (RFEF) and the Association of Women’s Football Clubs (ACFF) – have started fighting over who should control the potentially lucrative TV rights.

The ACFF currently represents 70 clubs, 14 of which compete in the 16-team top flight (Liga Iberdrola). FC Barcelona and Athletic Club have not yet joined the association that was formed in 2015. Its president, Rubén Alcaine, recently stated that since its inception, players’ salaries had risen by 37% and that currently, not only do all players earn higher than the minimum wage, but also all playing staff are paying into the state social security system.

With regards to TV rights, the ACFF insists that it, and not the RFEF, has the right to administer and adjudicate the broadcast and media rights of its member clubs. In exchange for assuming this management, the teams would be willing to raise the minimum wage from the current €14,000 to €20,000 per year.

The players unions (AFE, UGT and Futbolistas ON) have all pointed out the vast gap in wages between the men’s and women’s games. In LaLiga the minimum annual salaries are €155,000 in Primera and €77,500 in Segunda.

Club executives insist that, despite substantial growth in the last three years, the income generated by the sport currently does not come anywhere near to covering costs. FC Barcelona allocates almost five million euros to its staff and players, but can only do this thanks to the income generated by the men’s team. Independent clubs – those not affiliated to professional men’s clubs – generally handle less than €500,000 per year.

Not everything comes down to money though. The existence of ‘anti-pregnancy clauses’ in the sport is a hotly debated topic. Despite the denials of the clubs that these exist, the Association for Women in Professional Sports (AMDP) claims that women are forced to choose between “being a mother and continuing your professional career,” something that is “unacceptable in any other job”. According to Mar Mas, the association’s president, “While many male players get sidelined with injury for a longer time than a pregnant woman would – and get fully paid and supported in the meantime – women players are forced to keep quiet and not rock the boat if they want to continue playing.”