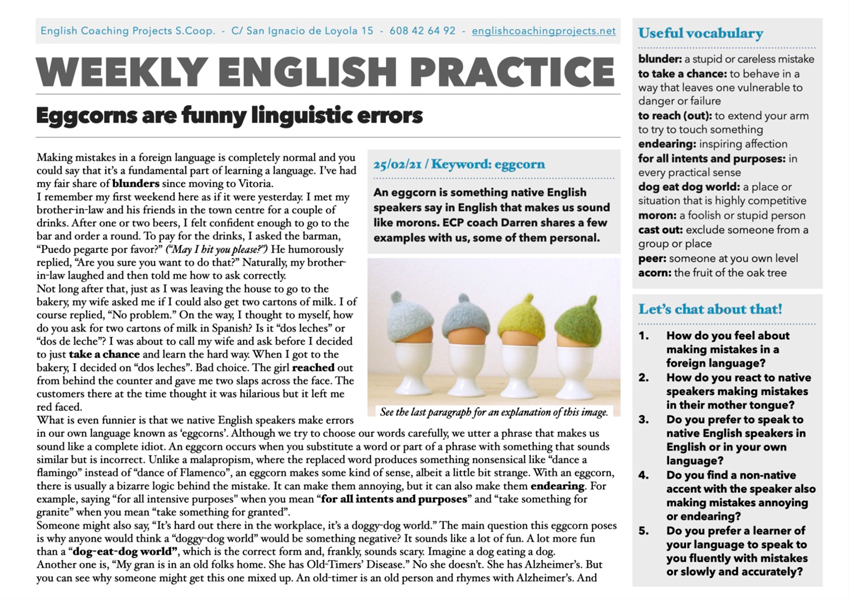 An Eggcorn Is a Funny Linguistic Error

An eggcorn is something native English speakers say in English that makes us sound like morons. ECP coach Darren shares a few examples with us, some of them personal.

blunder: a stupid or careless mistake

to take a chance: to behave in a way that leaves one vulnerable to danger or failure

to reach (out): to extend your arm to try to touch something

for all intents and purposes: in every practical sense

dog-eat-dog world: a place or situation that is highly competitive

moron: a foolish or stupid person

to cast out: to exclude someone from a group or place

peer: someone at you own level

acorn: the fruit of the oak tree

An eggcorn is something native English speakers say in English that makes us sound like morons. ECP coach Darren shares a few examples with us, some of them personal.

Making mistakes in a foreign language is completely normal and you could say that it’s a fundamental part of learning a language. I’ve had my fair share of blunders since moving to Vitoria.

I remember my first weekend here as if it were yesterday. I met my brother-in-law and his friends in the town centre for a couple of drinks. After one or two beers, I felt confident enough to go to the bar and order a round. To pay for the drinks, I asked the barman, “Puedo pegarte por favor?” (“May I hit you please?”) He humorously replied, “Are you sure you want to do that?” Naturally, my brother-in-law laughed and then told me how to ask correctly.

Not long after that, just as I was leaving the house to go to the bakery, my wife asked me if I could also get two cartons of milk. I of course replied, “No problem.” On the way, I thought to myself, how do you ask for two cartons of milk in Spanish? Is it “dos leches” or “dos de leche”? I was about to call my wife and ask before I decided to just take a chance and learn the hard way. When I got to the bakery, I decided on “dos leches”. Bad choice. The girl reached out from behind the counter and gave me two slaps across the face. The customers there at the time thought it was hilarious but it left me red faced.

What is even funnier is that we native English speakers make errors in our own language known as ‘eggcorns’. Although we try to choose our words carefully, we utter a phrase that makes us sound like a complete idiot. An eggcorn occurs when you substitute a word or part of a phrase with something that sounds similar but is incorrect. Unlike a malapropism, where the replaced word produces something nonsensical like “dance a flamingo” instead of “dance of Flamenco”, an eggcorn makes some kind of sense, albeit a little bit strange. With an eggcorn, there is usually a bizarre logic behind the mistake. It can make them annoying, but it can also make them endearing. For example, saying “for all intensive purposes” when you mean “for all intents and purposes” and “take something for granite” when you mean “take something for granted”.

Someone might also say, “It’s hard out there in the workplace, it’s a doggy-dog world.” The main question this eggcorn poses is why anyone would think a “doggy-dog world” would be something negative? It sounds like a lot of fun. A lot more fun than a “dog-eat-dog world”, which is the correct form and, frankly, sounds scary. Imagine a dog eating a dog.

Another one is, “My gran is in an old folks home. She has Old-Timers’ Disease.” No she doesn’t. She has Alzheimer’s. But you can see why someone might get this one mixed up. An old-timer is an old person and rhymes with Alzheimer’s. And finally, you may hear, “No one talks to that guy who sits on his own all the time. He’s a bit of a social leopard.” A social leopard sounds like the coolest person ever. But a social leper is someone who has been cast out by their peers and keeps themselves to themselves.

So, I guess what I’m trying to say is, let’s not worry too much about making mistakes.

Oh, by the way, where do you think the word eggcorn comes from originally? It is an eggcorn itself: of acorn.

Are You A Good Language Learner?