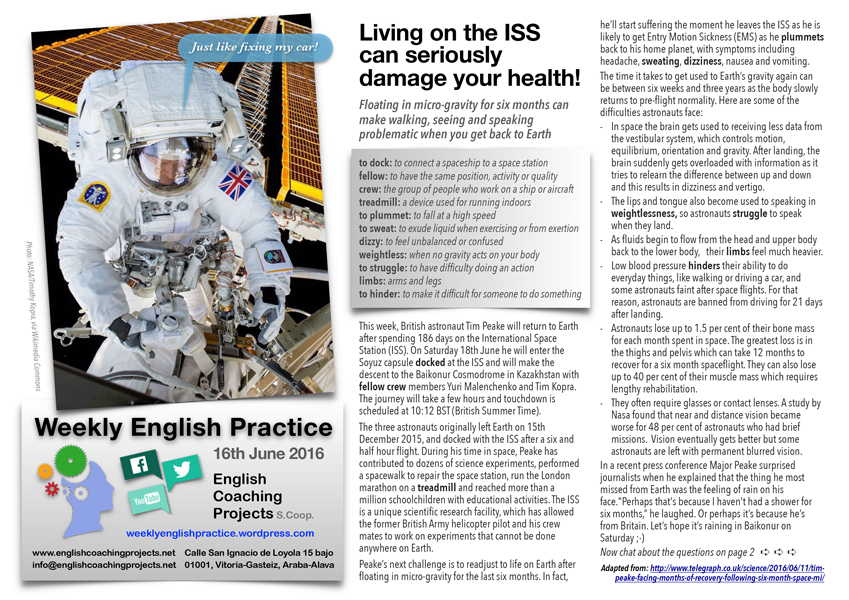 Floating in micro-gravity for six months can make walking, seeing and speaking problematic when you get back to Earth

to dock: to connect a spaceship to a space station

fellow: to have the same position, activity or quality

crew: the group of people who work on a ship or aircraft

to plummet: to fall at a high speed

to sweat: to exude liquid when exercising or from exertion

dizzy: to feel unbalanced or confused

weightless: when no gravity acts on your body

to struggle: to have difficulty doing an action

to hinder: to make it difficult for someone to do something

This week, British astronaut Tim Peake will return to Earth after spending 186 days on the International Space Station (ISS). On Saturday 18th June he will enter the Soyuz capsule docked at the ISS and will make the descent to the Baikonur Cosmodrome in Kazakhstan with fellow crew members Yuri Malenchenko and Tim Kopra. The journey will take a few hours and touchdown is scheduled at 10:12 BST (British Summer Time).

The three astronauts originally left Earth on 15th December 2015, and docked with the ISS after a six and half hour flight. During his time in space, Peake has contributed to dozens of science experiments, performed a spacewalk to repair the space station, run the London marathon on a treadmill and reached more than a million schoolchildren with educational activities. The ISS is a unique scientific research facility, which has allowed  the former British Army helicopter pilot and his crew mates to work on experiments that cannot be done anywhere on Earth.

Peake’s next challenge is to readjust to life on Earth after floating in micro-gravity for the last six months. In fact, he’ll start suffering the moment he leaves the ISS as he is likely to get Entry Motion Sickness (EMS) as he plummets back to his home planet, with symptoms including headache, sweating, dizziness, nausea and vomiting.

The time it takes to get used to Earth’s gravity again can be between six weeks and three years as the body slowly returns to pre-flight normality. Here are some of the difficulties astronauts face:

In a recent press conference Major Peake surprised journalists when he explained that the thing he most missed from Earth was the feeling of rain on his face.”Perhaps that’s because I haven’t had a shower for six months,” he laughed. Or perhaps it’s because he’s from Britain. Let’s hope it’s raining in Baikonur on Saturday 😉