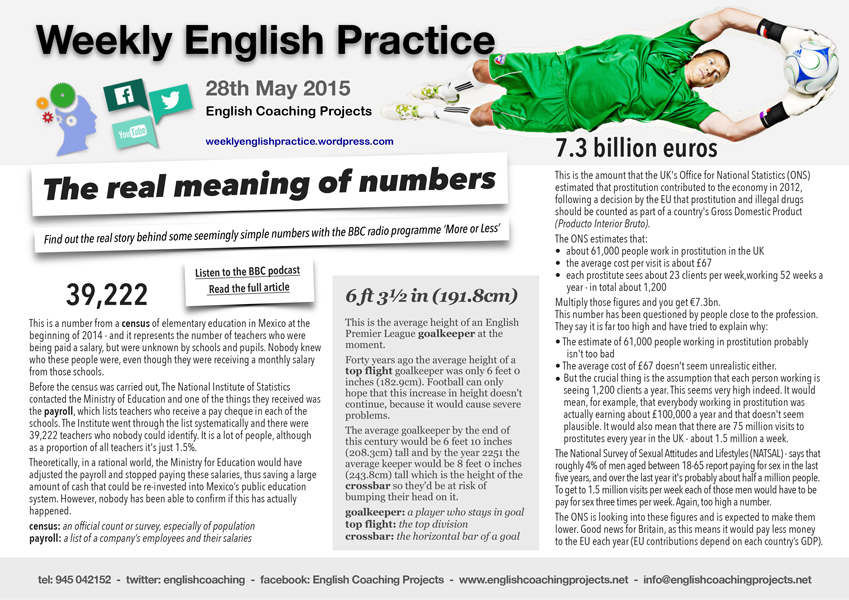 census: an official count or survey, especially of population

payroll: a list of a company’s employees and their salaries

goalkeeper: a player who stays in goal

crossbar: the horizontal bar of a goal

This is a number from a census of elementary education in Mexico at the beginning of 2014 – and it represents the number of teachers who were being paid a salary, but were unknown by schools and pupils. Nobody knew who these people were, even though they were receiving a monthly salary from those schools.

Before the census was carried out, The National Institute of Statistics contacted the Ministry of Education and one of the things they received was the payroll, which lists teachers who receive a pay cheque in each of the schools. The Institute went through the list systematically and there were 39,222 teachers who nobody could identify. It is a lot of people, although as a proportion of all teachers it’s just 1.5%.

Theoretically, in a rational world, the Ministry for Education would have adjusted the payroll and stopped paying these salaries, thus saving a large amount of cash that could be re-invested into Mexico’s public education system. However, nobody has been able to confirm if this has actually happened.

This is the average height of an English Premier League goalkeeper at the moment.

Forty years ago the average height of a top flight goalkeeper was only 6 feet 0 inches (182.9cm). Football can only hope that this increase in height doesn’t continue, because it would cause severe problems.

The average goalkeeper by the end of this century would be 6 feet 10 inches (208.3cm) tall and by the year 2251 the average keeper would be 8 feet 0 inches (243.8cm) tall which is the height of the crossbar so they’d be at risk of bumping their head on it.

This is the amount that the UK’s Office for National Statistics (ONS) estimated that prostitution contributed to the economy in 2012, following a decision by the EU that prostitution and illegal drugs should be counted as part of a country’s Gross Domestic Product (Producto Interior Bruto).

The ONS estimates that:

• the average cost per visit is about £67

Multiply those figures and you get €7.3bn.

This number has been questioned by people close to the profession. They say it is far too high and have tried to explain why:

• The estimate of 61,000 people working in prostitution probably isn’t too bad

• The average cost of £67 doesn’t seem unrealistic either.

But the crucial thing is the assumption that each person working is seeing 1,200 clients a year. This seems very high indeed. It would mean, for example, that everybody working in prostitution was actually earning about £100,000 a year and that doesn’t seem plausible. It would also mean that there are 75 million visits to prostitutes every year in the UK – about 1.5 million a week.

The National Survey of Sexual Attitudes and Lifestyles (NATSAL) – says that roughly 4% of men aged between 18-65 report paying for sex in the last five years, and over the last year it’s probably about half a million people. To get to 1.5 million visits per week each of those men would have to be pay for sex three times per week. Again, too high a number.

The ONS is looking into these figures and is expected to make them lower. Good news for Britain, as this means it would pay less money to the EU each year (EU contributions depend on each country’s GDP).