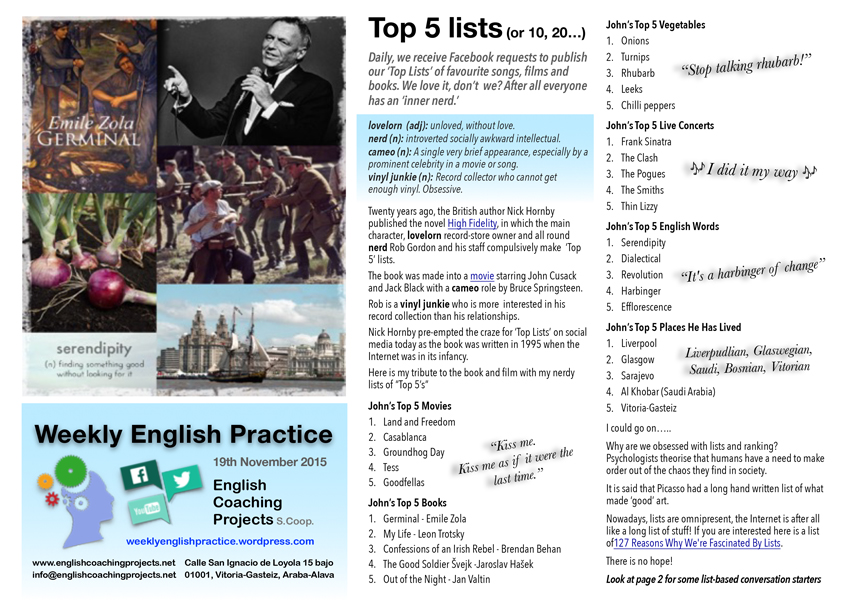 Daily, we receive Facebook requests to publish our ‘Top Lists’ of favourite songs, films and books. We love it, don’t  we? After all everyone has an ‘inner nerd.’

cameo (n): A single very brief appearance, especially by a prominent celebrity in a movie or song.

Twenty years ago, the British author Nick Hornby published the novel High Fidelity, in which the main character, lovelorn record-store owner and all round nerd Rob Gordon and his staff compulsively make  ‘Top 5’ lists.

The book was made into a movie starring John Cusack and Jack Black with a cameo role by Bruce Springsteen.

Rob is a vinyl junkie who is more  interested in his record collection than his relationships.

Nick Hornby pre-empted the craze for ‘Top Lists’ on social media today as the book was written in 1995 when the Internet was in its infancy.

John’s Top 5 Places He Has Lived

Why are we obsessed with lists and ranking? Psychologists theorise that humans have a need to make order out of the chaos they find in society.

It is said that Picasso had a long hand written list of what made ‘good’ art.

There is no hope!

Look at page 2 for some list-based conversation starters