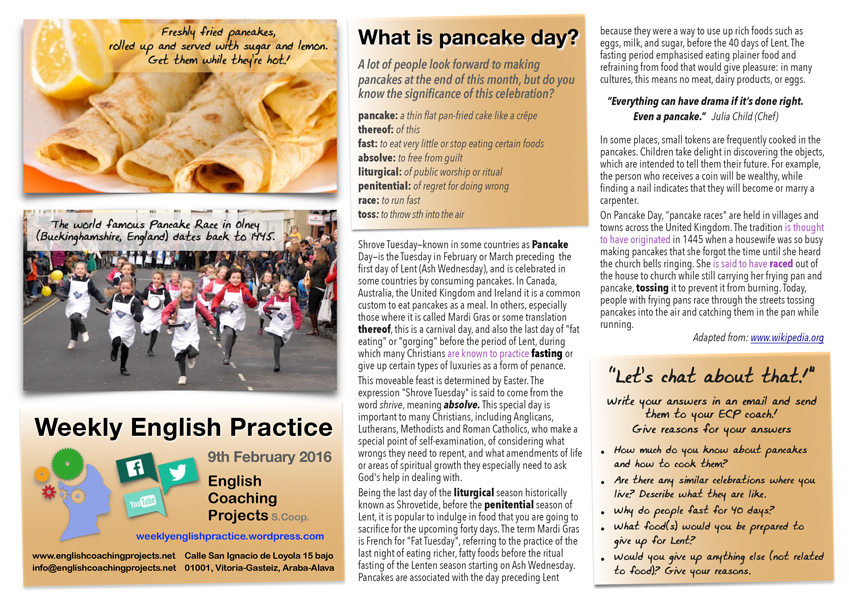 A lot of people look forward to making pancakes at the end of this month, but do you know the significance of this celebration?

pancake: a thin flat pan-fried cake like a crêpe

absolve: to free from guilt

liturgical: of public worship or ritual

penitential: of regret for doing wrong

toss: to throw sth into the air

Shrove Tuesday—known in some countries as Pancake Day—is the Tuesday in February or March preceding  the first day of Lent (Ash Wednesday), and is celebrated in some countries by consuming pancakes. In Canada, Australia, the United Kingdom and Ireland it is a common custom to eat pancakes as a meal. In others, especially those where it is called Mardi Gras or some translation thereof, this is a carnival day, and also the last day of “fat eating” or “gorging” before the period of Lent, during which many Christians are known to practice fasting or give up certain types of luxuries as a form of penance.

This moveable feast is determined by Easter. The expression “Shrove Tuesday” is said to come from the word shrive, meaning absolve. This special day is important to many Christians, including Anglicans, Lutherans, Methodists and Roman Catholics, who make a special point of self-examination, of considering what wrongs they need to repent, and what amendments of life or areas of spiritual growth they especially need to ask God’s help in dealing with.

Being the last day of the liturgical season historically known as Shrovetide, before the penitential season of Lent, it is popular to indulge in food that you are going to sacrifice for the upcoming forty days. The term Mardi Gras is French for “Fat Tuesday”, referring to the practice of the last night of eating richer, fatty foods before the ritual fasting of the Lenten season starting on Ash Wednesday. Pancakes are associated with the day preceding Lent because they were a way to use up rich foods such as eggs, milk, and sugar, before the 40 days of Lent. The fasting period emphasised eating plainer food and refraining from food that would give pleasure: in many cultures, this means no meat, dairy products, or eggs.

In some places, small tokens are frequently cooked in the pancakes. Children take delight in discovering the objects, which are intended to tell them their future. For example, the person who receives a coin will be wealthy, while finding a nail indicates that they will become or marry a carpenter.

On Pancake Day, “pancake races” are held in villages and towns across the United Kingdom. The tradition is thought to have originated in 1445 when a housewife was so busy making pancakes that she forgot the time until she heard the church bells ringing. She is said to have raced out of the house to church while still carrying her frying pan and pancake, tossing it to prevent it from burning. Today, people with frying pans race through the streets tossing pancakes into the air and catching them in the pan while running.

Write your answers and send them by email to your ECP coach. Why not record your voice too? Listen to yourself speak and identify what you have to improve on ????