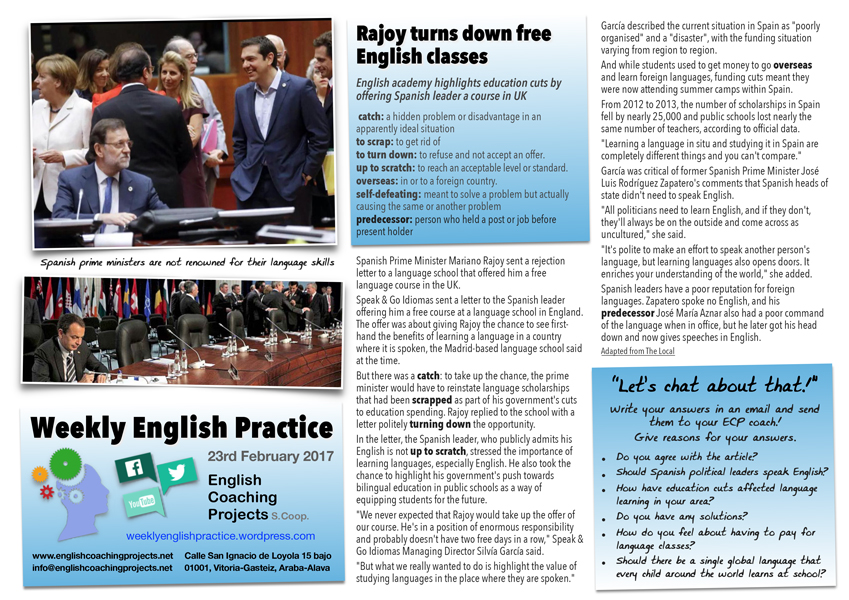 catch: a hidden problem or disadvantage in an apparently ideal situation

to scrap: to get rid of

to turn down: to refuse and not accept an offer.

up to scratch: to reach an acceptable level or standard.

overseas: in or to a foreign country.

self-defeating: meant to solve a problem but actually causing the same or another problem

predecessor: person who held a post or job before present holder

Spanish Prime Minister Mariano Rajoy sent a rejection letter to a language school that offered him a free language course in the UK.

In 2014, Speak & Go Idiomas sent a letter to the Spanish leader offering him a free course at a language school in England. The offer was about giving Rajoy the chance to see first-hand the benefits of learning a language in a country where it is spoken, the Madrid-based language school said at the time.

But there was a catch: to take up the chance, the prime minister would have to reinstate language scholarships that had been scrapped as part of his government’s cuts to education spending. Rajoy replied to the school with a letter politely turning down the opportunity.

In the letter, the Spanish leader, who publicly admits his English is not up to scratch, stressed the importance of learning languages, especially English. He also took the chance to highlight his government’s push towards bilingual education in public schools as a way of equipping students for the future.

“We never expected that Rajoy would take up the offer of our course. He’s in a position of enormous responsibility and probably doesn’t have two free days in a row,” Speak & Go Idiomas Managing Director Silvía García said.

“But what we really wanted to do is highlight the value of studying languages in the place where they are spoken.”

García described the current situation in Spain as “poorly organised” and a “disaster”, with the funding situation varying from region to region.

And while students used to get money to go overseas and learn foreign languages, funding cuts meant they were now attending summer camps within Spain.

From 2012 to 2013, the number of scholarships in Spain fell by nearly 25,000 and public schools lost nearly the same number of teachers, according to official data.

“Learning a language in situ and studying it in Spain are completely different things and you can’t compare.”

“All politicians need to learn English, and if they don’t, they’ll always be on the outside and come across as uncultured,” she said.

“It’s polite to make an effort to speak another person’s language, but learning languages also opens doors. It enriches your understanding of the world,” she added.

Spanish leaders have a poor reputation for foreign languages. Zapatero spoke no English, and his predecessor José María Aznar also had a poor command of the language when in office, but he later got his head down and now gives speeches in English.

Adapted from The Local