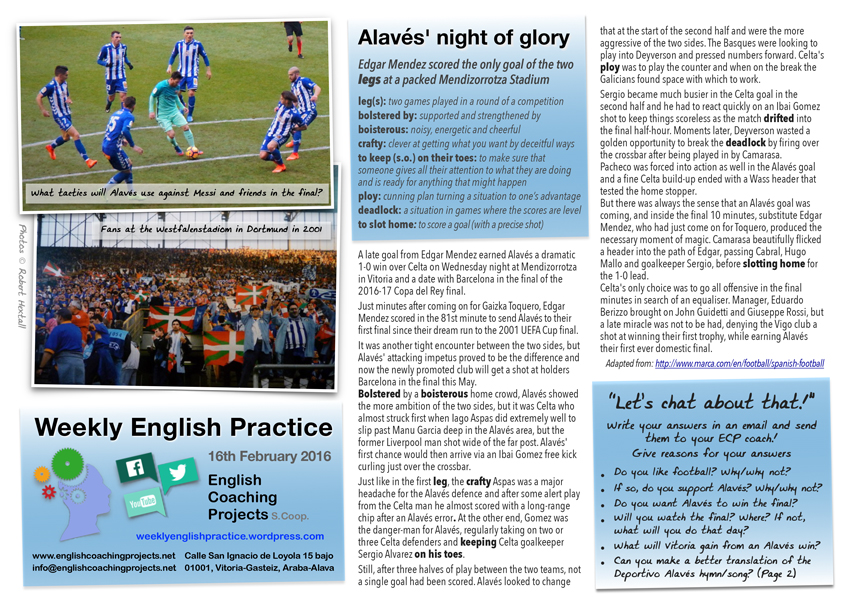 leg(s): two games played in a round of a competition

bolstered by: supported and strengthened by

crafty: clever at getting what you want by deceitful ways

to keep (s.o.) on their toes: to make sure that someone gives all their attention to what they are doing and is ready for anything that might happen

deadlock: a situation in games where the scores are level

to slot home: to score a goal (with a precise shot)

A late goal from Edgar Mendez earned Alavés a dramatic 1-0 win over Celta on Wednesday night at Mendizorrotza in Vitoria and a date with Barcelona in the final of the 2016-17 Copa del Rey final.

Just minutes after coming on for Gaizka Toquero, Edgar Mendez scored in the 81st minute to send Alavés to their first final since their dream run to the 2001 UEFA Cup final.

It was another tight encounter between the two sides, but Alavés’ attacking impetus proved to be the difference and now the newly promoted club will get a shot at holders Barcelona in the final this May.
Bolstered by a boisterous home crowd, Alavés showed the more ambition of the two sides, but it was Celta who almost struck first when Iago Aspas did extremely well to slip past Manu Garcia deep in the Alavés area, but the former Liverpool man shot wide of the far post. Alavés’ first chance would then arrive via an Ibai Gomez free kick curling just over the crossbar.

Just like in the first leg, the crafty Aspas was a major headache for the Alavés defence and after some alert play from the Celta man he almost scored with a long-range chip after an Alavés error. At the other end, Gomez was the danger-man for Alavés, regularly taking on two or three Celta defenders and keeping Celta goalkeeper Sergio Alvarez on his toes.

Still, after three halves of play between the two teams, not a single goal had been scored. Alavés looked to change that at the start of the second half and were the more aggressive of the two sides. The Basques were looking to play into Deyverson and pressed numbers forward. Celta’s ploy was to play the counter and when on the break the Galicians found space with which to work.

Sergio became much busier in the Celta goal in the second half and he had to react quickly on an Ibai Gomez shot to keep things scoreless as the match drifted into the final half-hour. Moments later, Deyverson wasted a golden opportunity to break the deadlock by firing over the crossbar after being played in by Camarasa.
Pacheco was forced into action as well in the Alavés goal and a fine Celta build-up ended with a Wass header that tested the home stopper.
But there was always the sense that an Alavés goal was coming, and inside the final 10 minutes, substitute Edgar Mendez, who had just come on for Toquero, produced the necessary moment of magic. Camarasa beautifully flicked a header into the path of Edgar, passing Cabral, Hugo Mallo and goalkeeper Sergio, before slotting home for the 1-0 lead.
Celta’s only choice was to go all offensive in the final minutes in search of an equaliser. Manager, Eduardo Berizzo brought on John Guidetti and Giuseppe Rossi, but a late miracle was not to be had, denying the Vigo club a shot at winning their first trophy, while earning Alavés their first ever domestic final.