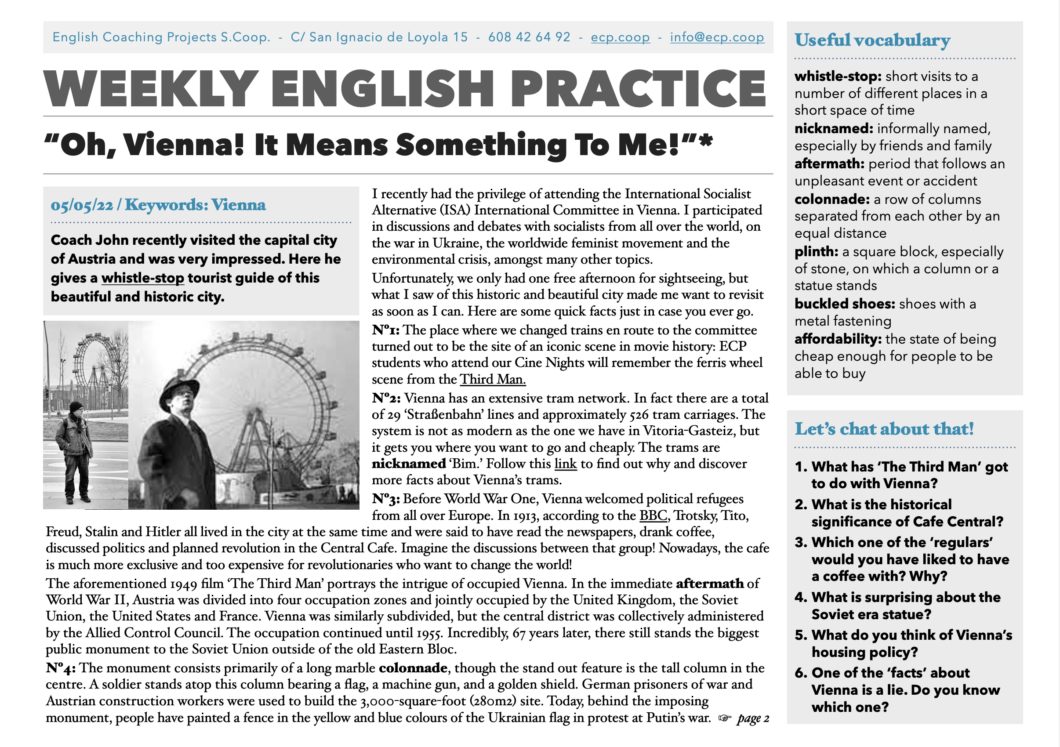 whistle-stop: short visits to a number of different places in a short space of time

aftermath: period that follows an unpleasant event or accident

colonnade: a row of columns separated from each other by an equal distance

plinth: a square block, especially of stone, on which a column or a statue stands

affordability: the state of being cheap enough for people to be able to buy

I recently had the privilege of attending the International Socialist Alternative, (ISA), International Committee in Vienna. I participated in discussions and debates with socialists from all over the world, on the war in Ukraine, the worldwide feminist movement and the environmental crisis, amongst many other topics.

Unfortunately, we only had one free afternoon for sightseeing, but what I saw of this historic and beautiful city made me want to revisit as soon as I can. Here are some quick facts just in case you ever go.

Nº1: The place where we changed trains en route to the committee turned out to be the site of an iconic scene in movie history: ECP students who attend our Cine Nights will remember the ferris wheel scene from the Third Man.

Nº2: Vienna has an extensive tram network. In fact there are a total of 29 ‘Straßenbahn’ lines and approximately 526 tram carriages. The system is not as modern as the one we have in Vitoria-Gasteiz, but it gets you where you want to go and cheaply. The trams are nicknamed ‘Bim.’ Follow this link to find out why and discover more facts about Vienna’s trams.

Nº3: Before World War One, Vienna welcomed political refugees from all over Europe. In 1913, according to the BBC, Trotsky, Tito, Freud, Stalin and Hitler all lived in the city at the same time and were said to have read the newspapers, drank coffee, discussed politics and planned revolution in the Central Cafe Imagine the discussions between that group! Nowadays, the cafe is much more exclusive and too expensive for revolutionaries who want to change the world!

The aforementioned 1949 film ‘The Third Man’ portrays the intrigue of occupied Vienna. In the immediate aftermath of World War II, Austria was divided into four occupation zones and jointly occupied by the United Kingdom, the Soviet Union, the United States and France. Vienna was similarly subdivided, but the central district was collectively administered by the Allied Control Council. The occupation continued until 1955. Incredibly, 67 years later, there still stands the biggest public monument to the Soviet Union outside of the old Eastern Bloc.

Nº4: The monument consists primarily of a long marble colonnade, though the stand out feature is the tall column in the centre. A soldier stands atop this column bearing a flag, a machine gun, and a golden shield. German prisoners of war and Austrian construction workers were used to build the 3,000-square-foot (280m2) site. Today, behind the imposing monument, people have painted a fence in the yellow and blue colours of the Ukrainian flag in protest at Putin’s war.

The text of the stone tablet in front of the monument begins: “Monument to the soldiers of the Soviet Army, who, for the liberation of Austria from fascism, have fallen….” An Israeli comrade who speaks Russian translated the rest of the Cyrillic writing on the plinth and various plaques. He told us there was a personal message from Stalin, praising the Soviet forces of the 3rd Ukrainian Front which was instrumental in liberating Vienna.

17,000 Ukrainian soldiers died in the urban warfare. Just another irony of history, like the fact that the Ukrainian born Trotsky, who was murdered on Stalin’s orders, always supported the policy of the rights of nations to self-determination and independence. I wonder if they spoke about the issue, over coffee in Cafe Central, back in the day?

Nº5: One of the apartments where Mozart lived in Vienna has survived to this day is at Domgasse number 5. The composer lived there from 1784 till 1787. His apartment was positively grand, with four large rooms, two small ones and a kitchen. His whole life long, he attached great importance to outward appearances, so smart clothes and buckled shoes were a must for him. And it was here at Domgasse that he also penned his best compositions, including what is perhaps his most popular opera The Marriage of Figaro. Also, in an unusual change of style, he wrote his biggest commercial hit in the flat, the synth-pop classic ‘Vienna’, which, 194 years later, reached Nº2 in the UK charts, when it was covered by British New Wave band Ultravox.

Nº6: Red Vienna is the name given to the 16-year period after the World War One when the Austrian Social Democratic Workers’ Party undertook one of the most ambitious public housing programmes ever.

Still today, 60% of residents live in co-ops, government-owned or subsidised housing built around the nucleus of the 1920s system. That effort is still credited with maintaining affordability a century later. Even as the Social Democratic Party has moderated, it has largely maintained a devotion to defending public-sector interventions in the city’s housing market and preserved its policy traditions. Vienna remains one of the cheapest big cities for renters in Europe.

1. What has ‘The Third Man’ got to do with Vienna?

2. What is the historical significance of Cafe Central?

3. Which one of the ‘regulars’ would you have liked to have a coffee with? Why?

4. What is surprising about the Soviet era statue?

6. One of the ‘facts’ about Vienna is a lie. Do you know which one?