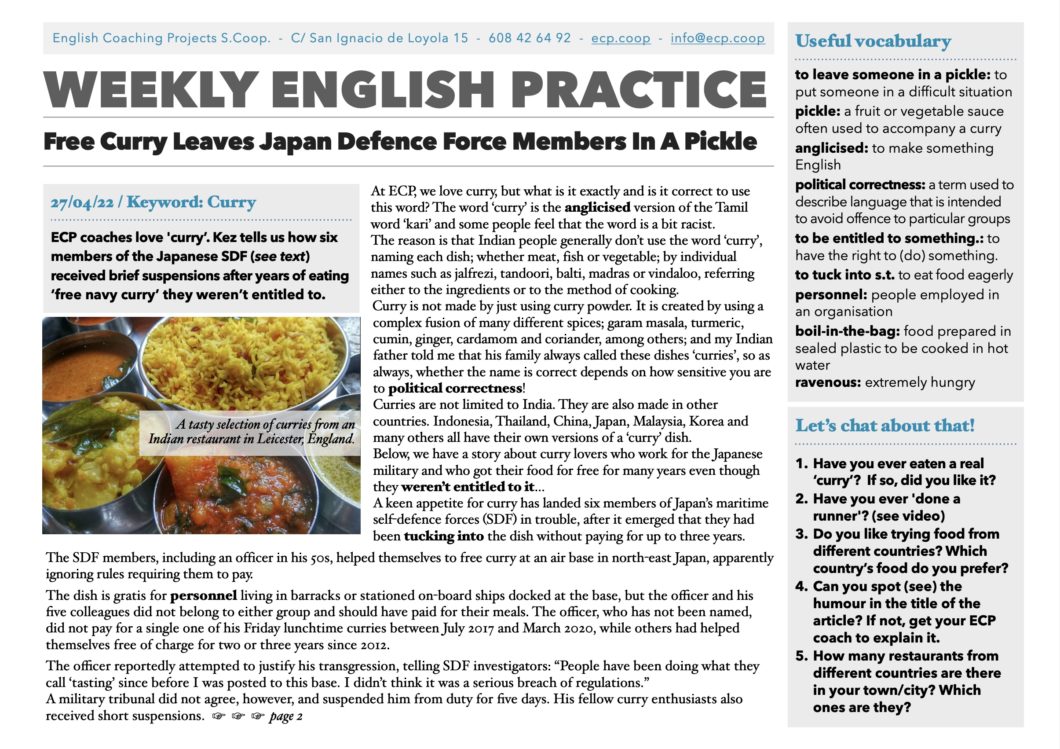 pickle: a fruit or vegetable sauce often used to accompany a curry

anglicised: to make something English

political correctness: a term used to describe language that is intended to avoid offence to particular groups

to be entitled to something.: to have the right to (do) something.

to tuck into s.t. to eat food eagerly

personnel: people employed in an organisation

boil-in-the-bag: food prepared in sealed plastic to be cooked in hot water

At ECP, we love curry, but what is it exactly and is it correct to use this word? The word ‘curry’ is the anglicisedversion of the Tamil word ‘kari’ and some people feel that the word is a bit racist.

The reason is that Indian people generally don’t use the word ‘curry’, naming each dish; whether meat, fish or vegetable; by individual names such as jalfrezi, tandoori, balti, madras or vindaloo, referring either to the ingredients or to the method of cooking.

Curry is not made by just using curry powder. It is created by using a complex fusion of many different spices; garam masala, turmeric, cumin, ginger, cardamom and coriander, among others; and my Indian father told me that his family always called these dishes ‘curries’, so as always, whether the name is correct depends on how sensitive you are to political correctness!

Curries are not limited to India. They are also made in other countries. Indonesia, Thailand, China, Japan, Malaysia, Korea and many others all have their own versions of a ‘curry’ dish. Below, we have a story about curry lovers who work for the Japanese military and who got their food for free for many years even though they weren’t entitled to it…

A keen appetite for curry has landed six members of Japan’s maritime self-defence forces (SDF) in trouble, after it emerged that they had been tucking into the dish without paying for up to three years. The SDF members, including an officer in his 50s, helped themselves to free curry at an air base in north-east Japan, apparently ignoring rules requiring them to pay.

The dish is gratis for personnel living in barracks or stationed on-board ships docked at the base, but the officer and his five colleagues did not belong to either group and should have paid for their meals. The officer, who has not been named, did not pay for a single one of his Friday lunchtime curries between July 2017 and March 2020, while others had helped themselves free of charge for two or three years since 2012.

The officer reportedly attempted to justify his transgression, telling SDF investigators: “People have been doing what they call ‘tasting’ since before I was posted to this base. I didn’t think it was a serious breach of regulations.”
A military tribunal did not agree, however, and suspended him from duty for five days. His fellow curry enthusiasts also received short suspensions.

Japan’s maritime SDF is proud of its connection to curry, which personnel eat every Friday. Packs of boil-in-the-bag“navy curry” are popular souvenirs and some appear on supermarket shelves.

Sailors in the imperial navy reportedly acquired a taste for the dish thanks to Anglo-Indian officers in the Royal Navy who brought curry powder to Japan after the country was forced to end almost three centuries of seclusion in the mid-1800s.

The first appearance in its anglicised form (spelt currey) was in Hannah Glasse’s 1747 book ‘The Art of Cookery Made Plain and Easy’. The earliest recipes in Japanese cookbooks appeared in 1872. Its modern-day incarnation, karē raisu (curry rice), is wildly popular among school children — and ravenous naval officers.