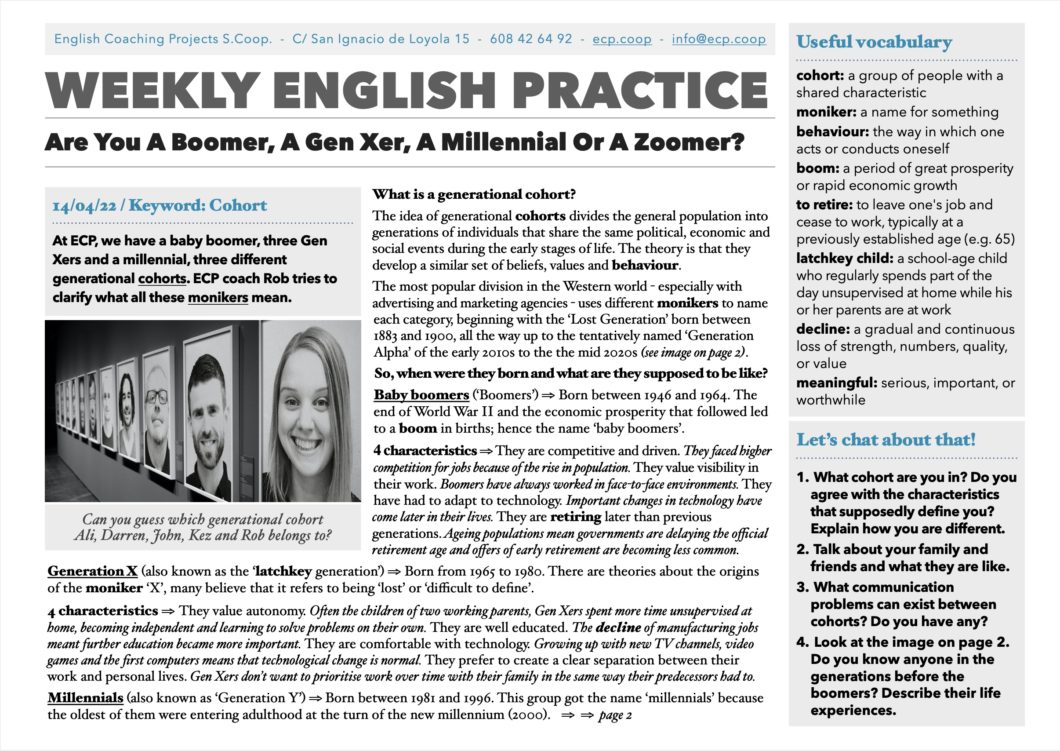 Are You A Boomer, A Gen Xer, A Millennial Or A Zoomer?

At ECP, we have a baby boomer, three Gen Xers and a millennial, three different generational cohorts. ECP coach Rob tries to clarify what all these monikers mean.

cohort: a group of people with a shared characteristic

moniker: a name for something

behaviour: the way in which one acts or conducts oneself

boom: a period of great prosperity or rapid economic growth

to retire: to leave one’s job and cease to work, typically at a previously established age (e.g. 65)

latchkey child: a school-age child who regularly spends part of the day unsupervised at home while his or her parents are at work

decline: a gradual and continuous loss of strength, numbers, quality, or value

At ECP, we have a baby boomer, three Gen Xers and a millennial, three different generational cohorts. ECP coach Rob tries to clarify what all these monikers mean.

What is a generational cohort?

The idea of generational cohorts divides the general population into generations of individuals that share the same political, economic and social events during the early stages of life. The theory is that they develop a similar set of beliefs, values and behaviour.

The most popular division in the Western world – especially with advertising and marketing agencies – uses different monikers to name each category, beginning with the ‘Lost Generation’ born between 1883 and 1900, all the way up to the tentatively named ‘Generation Alpha’ of the early 2010s to the the mid 2020s (see image on page 2).

So, when were they born and what are they supposed to be like?

Baby boomers (‘Boomers’) ⇒ Born between 1946 and 1964. The end of World War II and the economic prosperity that followed led to a boom in births; hence the name ‘baby boomers’.

4 characteristics ⇒ They are competitive and driven. They faced higher competition for jobs because of the rise in population. They value visibility in their work. Boomers have always worked in face-to-face environments. They have had to adapt to technology. Important changes in technology have come later in their lives. They are retiring later than previous generations. Ageing populations mean governments are delaying the official retirement age and offers of early retirement are becoming less common.

Generation X (also known as the ‘latchkey generation’) ⇒ Born from 1965 to 1980. There are theories about the origins of the moniker ‘X’, many believe that it refers to being ‘lost’ or ‘difficult to define’.

4 characteristics ⇒ They value autonomy. Often the children of two working parents, Gen Xers spent more time unsupervised at home, becoming independent and learning to solve problems on their own. They are well educated. The decline of manufacturing jobs meant further education became more important. They are comfortable with technology. Growing up with new TV channels, video games and the first computers means that technological change is normal.They prefer to create a clear separation between their work and personal lives. Gen Xers don’t want to prioritise work over time with their family in the same way their predecessors had to.

Millennials (also known as ‘Generation Y’) ⇒ Born between 1981 and 1996. This group got the name ‘millennials’ because the oldest of them were entering adulthood at the turn of the new millennium (2000).

4 characteristics ⇒ They prefer to collaborate. An approach to work that considers different points of view is preferable to top-down methods. They are motivated by meaningful work. They desire work that uses their creativity and talent, and that makes an impact on others. They are digital natives. Growing up with the internet means they accept new technologies. They are amenable to feedback. Professional development requires good feedback and mentorship.

4 characteristics ⇒ They value social responsibility and diversity. Social media has allowed them to give their opinions from a young age. They expect to work with modern technology. Digital natives expect digital solutions. They’re breaking away from institutional structures. Non-traditional approaches such as cryptocurrencies and online learning are accepted. They want stability AND flexibility. The option to work remotely is as important as pay and benefits.

Adapted from this article by ECP coach Rob Hextall

1. What cohort are you in? Do you agree with the characteristics that supposedly define you? Explain how you are different.

2. Talk about your family and friends and what they are like.

3. What communication problems can exist between cohorts? Do you have any?

4. Look at the image on page 2. Do you know anyone in the generations before the boomers? Describe their life experiences.

New Zealand To Ban Smoking For Next Generation

Climate: Enough of the blah, blah, blah! Time for Action!