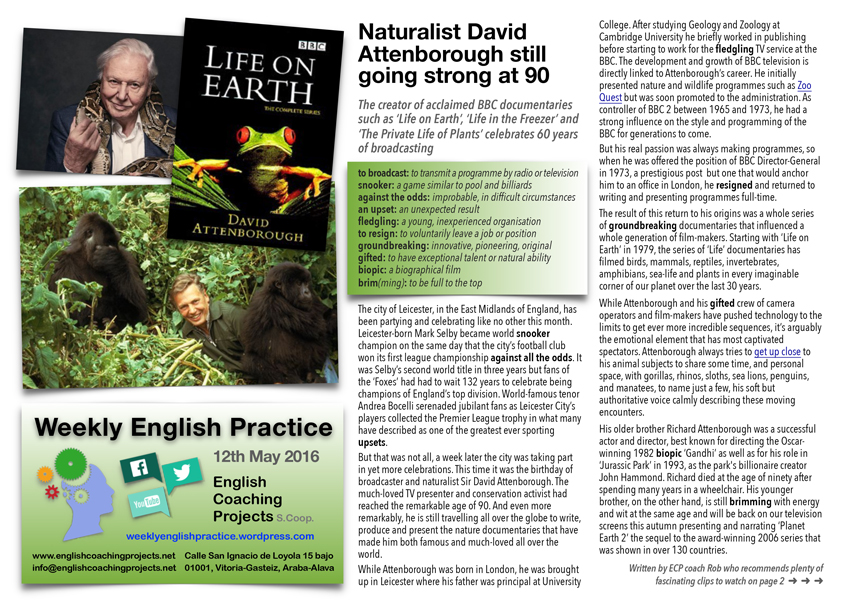 The creator of acclaimed BBC documentaries such as ‘Life on Earth’, ‘Life in the Freezer’ and ‘The Private Life of Plants’ celebrates 60 years of broadcasting. ECP coach Rob Hextall tells us more about his life.

to broadcast: to transmit a programme by radio or television

snooker: a game similar to pool and billiards

against the odds: improbable, in difficult circumstances

an upset: an unexpected result

to resign: to voluntarily leave a job or position

gifted: to have exceptional talent or natural ability

brim(ming): to be full to the top

The city of Leicester, in the East Midlands of England, has been partying and celebrating like no other this month. Leicester-born Mark Selby became world snooker champion on the same day that the city’s football club won its first league championship against all the odds. It was Selby’s second world title in three years but fans of the ‘Foxes’ had had to wait 132 years to celebrate being champions of England’s top division. World-famous tenor Andrea Bocelli serenaded jubilant fans as Leicester City’s players collected the Premier League trophy in what many have described as one of the greatest ever sporting upsets.

But that was not all, a week later the city was taking part in yet more celebrations. This time it was the birthday of broadcaster and naturalist Sir David Attenborough. The much-loved TV presenter and conservation activist had reached the remarkable age of 90. And even more remarkably, he is still travelling all over the globe to write, produce and present the nature documentaries that have made him both famous and much-loved all over the world.

While Attenborough was born in London, he was brought up in Leicester where his father was principal at University College. After studying Geology and Zoology at Cambridge University he briefly worked in publishing before starting to work for the fledgling TV service at the BBC. The development and growth of BBC television is directly linked to Attenborough’s career. He initially presented nature and wildlife programmes such as Zoo Quest but was soon promoted to the administration. As controller of BBC 2 between 1965 and 1973, he had a strong influence on the style and programming of the BBC for generations to come.

But his real passion was always making programmes, so when he was offered the position of BBC Director-General in 1973, a prestigious post  but one that would anchor him to an office in London, he resigned and returned to writing and presenting programmes full-time.

The result of this return to his origins was a whole series of groundbreaking documentaries that influenced a whole generation of film-makers. Starting with ‘Life on Earth’ in 1979, the series of ‘Life’ documentaries has filmed birds, mammals, reptiles, invertebrates, amphibians, sea-life and plants in every imaginable corner of our planet over the last 30 years.

While Attenborough and his gifted crew of camera operators and film-makers have pushed technology to the limits to get ever more incredible sequences, it’s arguably the emotional element that has most captivated spectators. Attenborough always tries to get up close to his animal subjects to share some time, and personal space, with gorillas, rhinos, sloths, sea lions, penguins, and manatees, to name just a few, his soft but authoritative voice calmly describing these moving encounters.

His older brother Richard Attenborough was a successful actor and director, best known for directing the Oscar-winning 1982 biopic ‘Gandhi’ as well as for his role in ‘Jurassic Park’ in 1993, as the park’s billionaire creator John Hammond. Richard died at the age of ninety after spending many years in a wheelchair. His younger brother, on the other hand, is still brimming with energy and wit at the same age and will be back on our television screens this autumn presenting and narrating ‘Planet Earth 2’ the sequel to the award-winning 2006 series that was shown in over 130 countries.+