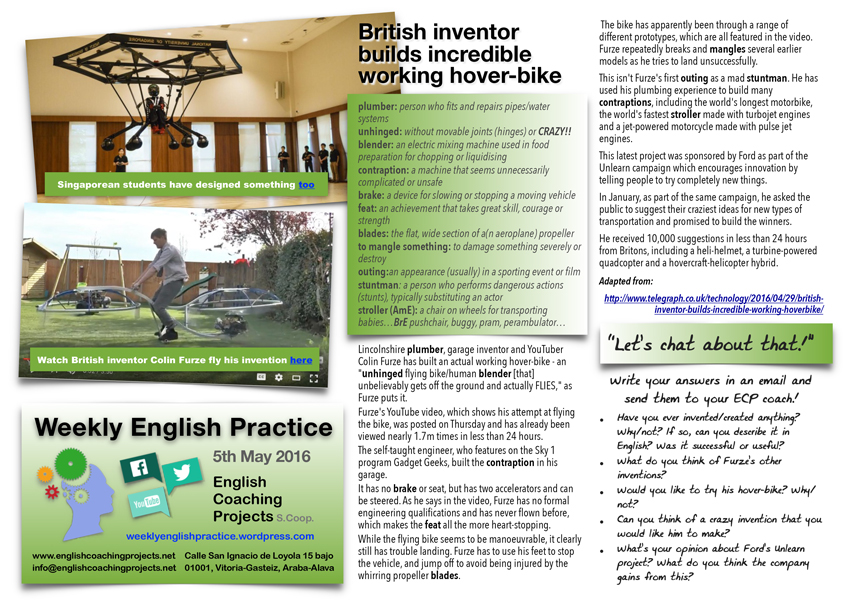 blender: an electric mixing machine used in food preparation for chopping or liquidising

contraption: a machine that seems unnecessarily complicated or unsafe

brake: a device for slowing or stopping a moving vehicle

feat: an achievement that takes great skill, courage or strength

to mangle something: to damage something severely or destroy

outing:an appearance (usually) in a sporting event or film

Lincolnshire plumber, garage inventor and YouTuber Colin Furze has built an actual working hover-bike – an “unhinged flying bike/human blender [that] unbelievably gets off the ground and actually FLIES,” as Furze puts it.

Furze’s YouTube video, which shows his attempt at flying the bike, was posted on Thursday and has already been viewed nearly 1.7m times in less than 24 hours.

The self-taught engineer, who features on the Sky 1 program Gadget Geeks, built the contraption in his garage.

It has no brake or seat, but has two accelerators and can be steered. As he says in the video, Furze has no formal engineering qualifications and has never flown before, which makes the feat all the more heart-stopping.

While the flying bike seems to be manoeuvrable, it clearly still has trouble landing. Furze has to use his feet to stop the vehicle, and jump off to avoid being injured by the whirring propeller blades.

The bike has apparently been through a range of different prototypes, which are all featured in the video. Furze repeatedly breaks and mangles several earlier models as he tries to land unsuccessfully.

This isn’t Furze’s first outing as a mad stuntman. He has used his plumbing experience to build many contraptions, including the world’s longest motorbike, the world’s fastest stroller made with turbojet engines and a jet-powered motorcycle made with pulse jet engines.

This latest project was sponsored by Ford as part of the Unlearn campaign which encourages innovation by telling people to try completely new things.

In January, as part of the same campaign, he asked the public to suggest their craziest ideas for new types of transportation and promised to build the winners.

He received 10,000 suggestions in less than 24 hours from Britons, including a heli-helmet, a turbine-powered quadcopter and a hovercraft-helicopter hybrid.