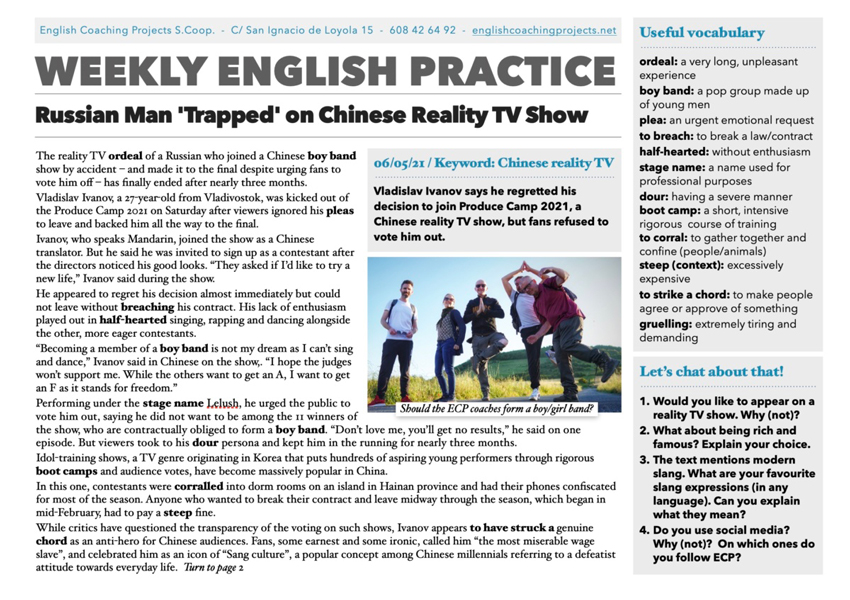 Vladislav Ivanov says he regretted his decision to join Produce Camp 2021, a Chinese reality TV show, but fans refused to vote him out.

boy band: a pop group made up of young men

to breach: to break a law/contract

dour: having a severe manner

to corral: to gather together and confine (people/animals)

to strike a chord: to make people agree or approve of something

Vladislav Ivanov says he regretted his decision to join Produce Camp 2021, a Chinese reality TV show, but fans refused to vote him out.

The reality TV ordeal of a Russian who joined a Chinese boy band show by accident – and made it to the final despite urging fans to vote him off – has finally ended after nearly three months.

Vladislav Ivanov, a 27-year-old from Vladivostok, was kicked out of the Produce Camp 2021 on Saturday after viewers ignored his pleas to leave and backed him all the way to the final.

Ivanov, who speaks Mandarin, joined the show as a Chinese translator. But he said he was invited to sign up as a contestant after the directors noticed his good looks. “They asked if I’d like to try a new life,” Ivanov said during the show.

He appeared to regret his decision almost immediately but could not leave without breaching his contract. His lack of enthusiasm played out in half-hearted singing, rapping and dancing alongside the other, more eager contestants.

“Becoming a member of a boy band is not my dream as I can’t sing and dance,” Ivanov said in Chinese on the show,. “I hope the judges won’t support me. While the others want to get an A, I want to get an F as it stands for freedom.”

Performing under the stage name Lelush, he urged the public to vote him out, saying he did not want to be among the 11 winners of the show, who are contractually obliged to form a boy band. “Don’t love me, you’ll get no results,” he said on one episode. But viewers took to his dour persona and kept him in the running for nearly three months.

In this one, contestants were corralled into dorm rooms on an island in Hainan province and had their phones confiscated for most of the season. Anyone who wanted to break their contract and leave midway through the season, which began in mid-February, had to pay a steep fine.

While critics have questioned the transparency of the voting on such shows, Ivanov appears to have struck a genuine chord as an anti-hero for Chinese audiences. Fans, some earnest and some ironic, called him “the most miserable wage slave”, and celebrated him as an icon of “Sang culture”, a popular concept among Chinese millennials referring to a defeatist attitude towards everyday life.

“Don’t let him quit!” one viewer commented on a video of a dejected-looking Ivanov performing a Russian rap. “Sisters, vote for him! Let him 996!” another fan commented, using the Chinese slang for the gruelling work schedule that afflicts many young staff, especially in digital startups.

The unlikely star made it to the final episode of the show on Saturday where he failed to earn enough votes to join the band. “I’m finally getting off work,” a relieved Ivanov said on his Weibo account on Sunday.

On the Chinese social media site Weibo, a hashtag related to his departure was viewed more than 180m times and reposted more than 59,000 times, including by the Russian embassy.

“Congrats, have a good rest,” the embassy said.

Adapted from the guardian.co.uk by ECP Coach Darren Kez Kurien

What Is Online Trolling?

Watching films in Spain: to dub or not to dub?