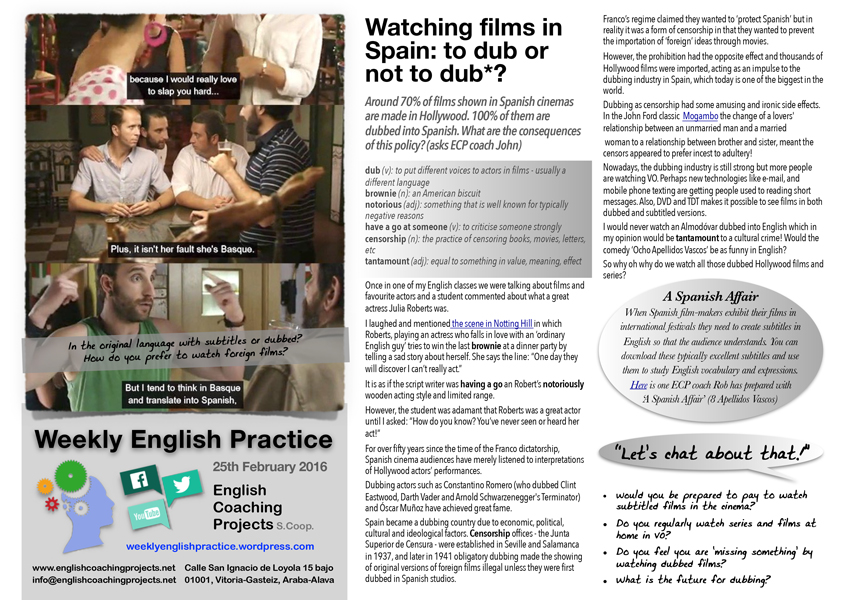 Around 70% of films shown in Spanish cinemas are made in Hollywood. 100% of them are dubbed into Spanish. What are the consequences of this policy? (asks ECP coach John)

notorious (adj): something that is well known for typically negative reasons

have a go at someone (v): to criticise someone strongly

tantamount (adj): equal to something in value, meaning, effect

Once in one of my English classes we were talking about films and favourite actors and a student commented about what a great actress Julia Roberts was.

I laughed and mentioned the scene in Notting Hill in which Roberts, playing an actress who falls in love with an ‘ordinary English guy’ tries to win the last brownie at a dinner party by telling a sad story about herself. She says the line: “One day they will discover I can’t really act.”

It is as if the script writer was having a go an Robert’s notoriously wooden acting style and limited range.

However, the student was adamant that Roberts was a great actor until I asked: “How do you know? You’ve never seen or heard her act!”

For over fifty years since the time of the Franco dictatorship, Spanish cinema audiences have merely listened to interpretations of Hollywood actors’ performances.

Spain became a dubbing country due to economic, political, cultural and ideological factors. Censorship offices – the Junta Superior de Censura – were established in Seville and Salamanca in 1937, and later in 1941 obligatory dubbing made the showing of original versions of foreign films illegal unless they were first dubbed in Spanish studios.

Franco’s regime claimed they wanted to ‘protect Spanish’ but in reality it was a form of censorship in that they wanted to prevent the importation of ‘foreign’ ideas through movies.

However, the prohibition had the opposite effect and thousands of Hollywood films were imported, acting as an impulse to the dubbing industry in Spain, which today is one of the biggest in the world.

Dubbing as censorship had some amusing and ironic side effects. In the John Ford classic  Mogambo the change of a lovers’ relationship between an unmarried man and a married woman to a relationship between brother and sister, meant the censors appeared to prefer incest to adultery!

Nowadays, the dubbing industry is still strong but more people are watching VO. Perhaps new technologies like e-mail, and mobile phone texting are getting people used to reading short messages. Also, DVD and TDT makes it possible to see films in both dubbed and subtitled versions.

I would never watch an Almodóvar dubbed into English which in my opinion would be tantamount to a cultural crime! Would the comedy ‘Ocho Apellidos Vascos’ be as funny in English?

So why oh why do we watch all those dubbed Hollywood films and series?

When Spanish film-makers exhibit their films in international festivals they need to create subtitles in English so that the audience understands. You can download these typically excellent subtitles and use them to study English vocabulary and expressions.