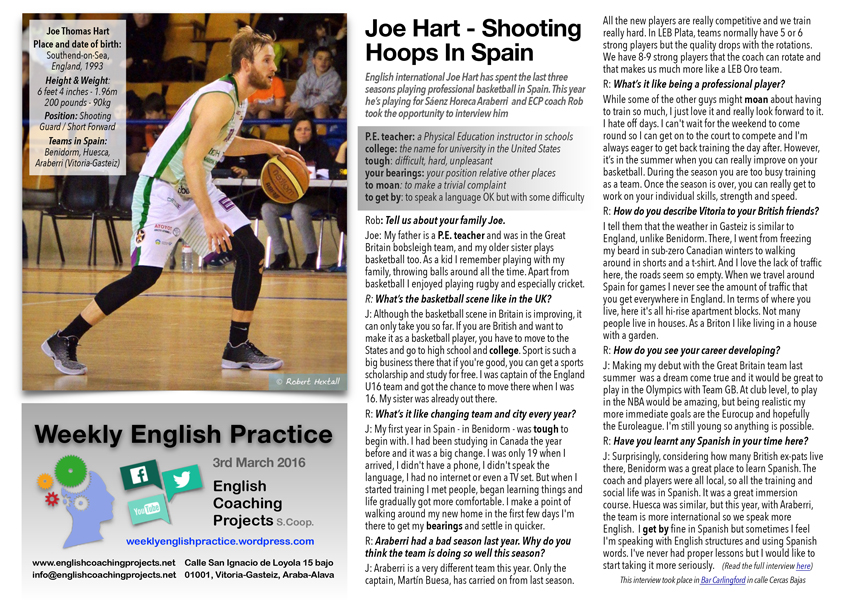 college: the name for university in the United States

your bearings: your position relative other places

to moan: to make a trivial complaint

to get by: to speak a language OK but with some difficulty

Rob: Tell us about your family Joe.

Joe: My father is a P.E. teacher and was in the Great Britain bobsleigh team, and my older sister plays basketball too. As a kid I remember playing with my family, throwing balls around all the time. Apart from basketball I enjoyed playing rugby and especially cricket.

R: What’s the basketball scene like in the UK?

J: Although the basketball scene in Britain is improving, it can only take you so far. If you are British and want to make it as a basketball player, you have to move to the States and go to high school and college. Sport is such a big business there that if you’re good, you can get a sports scholarship and study for free. I was captain of the England U16 team and got the chance to move there when I was 16. My sister was already out there.

R: What’s it like changing team and city every year?

J: My first year in Spain – in Benidorm – was tough to begin with. I had been studying in Canada the year before and it was a big change. I was only 19 when I arrived, I didn’t have a phone, I didn’t speak the language, I had no internet or even a TV set. But when I started training I met people, began learning things and life gradually got more comfortable. I make a point of walking around my new home in the first few days I’m there to get my bearings and settle in quicker.

R: Araberri had a bad season last year. Why do you think the team is doing so well this season?

J: Araberri is a very different team this year. Only the captain, Martín Buesa, has carried on from last season. All the new players are really competitive and we train really hard. In LEB Plata, teams normally have 5 or 6 strong players but the quality drops with the rotations. We have 8-9 strong players that the coach can rotate and that makes us much more like a LEB Oro team.

While some of the other guys might moan about having to train so much, I just love it and really look forward to it. I hate off days. I can’t wait for the weekend to come round so I can get on to the court to compete and I’m always eager to get back training the day after. However, it’s in the summer when you can really improve on your basketball. During the season you are too busy training as a team. Once the season is over, you can really get to work on your individual skills, strength and speed.

R: How do you describe Vitoria to your British friends?

I tell them that the weather in Gasteiz is similar to England, unlike Benidorm. There, I went from freezing my beard in sub-zero Canadian winters to walking around in shorts and a t-shirt. And I love the lack of traffic here, the roads seem so empty. When we travel around Spain for games I never see the amount of traffic that you get everywhere in England. In terms of where you live, here it’s all hi-rise apartment blocks. Not many people live in houses. As a Briton I like living in a house with a garden.

R: How do you see your career developing?

J: Making my debut with the Great Britain team last summer  was a dream come true and it would be great to play in the Olympics with Team GB. At club level, to play in the NBA would be amazing, but being realistic my more immediate goals are the Eurocup and hopefully the Euroleague. I’m still young so anything is possible.

R: Have you learnt any Spanish in your time here?

J: Surprisingly, considering how many British ex-pats live there, Benidorm was a great place to learn Spanish. The coach and players were all local, so all the training and social life was in Spanish. It was a great immersion course. Huesca was similar, but this year, with Araberri, the team is more international so we speak more English.  I get by fine in Spanish but sometimes I feel I’m speaking with English structures and using Spanish words. I’ve never had proper lessons but I would like to start taking it more seriously.