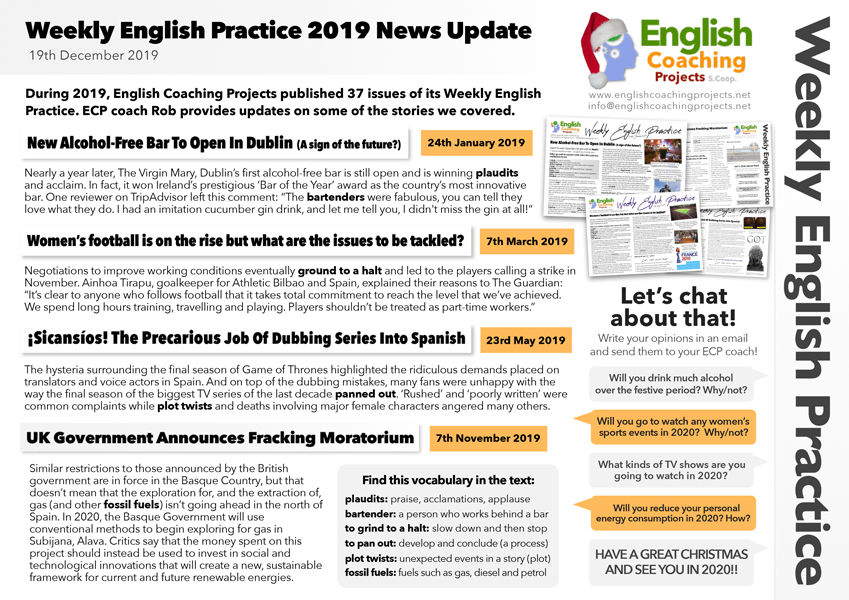 News Updates! During 2019, English Coaching Projects published 37 issues of its Weekly English Practice. ECP coach Rob provides updates on some of the stories we covered.

bartender: a person who works behind a bar

to grind to a halt: slow down and then stop

to pan out: develop and conclude (a process)

fossil fuels: fuels such as gas, diesel and petrol

News Updates! During 2019, English Coaching Projects published 37 issues of its Weekly English Practice. ECP coach Rob provides updates on some of the stories we covered.

Nearly a year later, The Virgin Mary, Dublin’s first alcohol-free bar is still open and is winning plaudits and acclaim. In fact, it won Ireland’s prestigious ‘Bar of the Year’ award as the country’s most innovative bar. One reviewer on TripAdvisor left this comment: “The bartenders were fabulous, you can tell they love what they do. I had an imitation cucumber gin drink, and let me tell you, I didn’t miss the gin at all!”

7th March 2019: Women’s Football Is On The Rise But What Are The Issues To Be Tackled?

Negotiations to improve working conditions eventually ground to a halt and led to the players calling a strike in November. Ainhoa Tirapu, goalkeeper for Athletic Bilbao and Spain, explained their reasons to The Guardian: “It’s clear to anyone who follows football that it takes total commitment to reach the level that we’ve achieved. We spend long hours training, travelling and playing. Players shouldn’t be treated as part-time workers.”

23rd May 2019: ¡Sicansíos! The Precarious Job of Dubbing Series into Spanish

The hysteria surrounding the final season of Game of Thrones highlighted the ridiculous demands placed on translators and voice actors in Spain. And on top of the dubbing mistakes, many fans were unhappy with the way the final season of the biggest TV series of the last decade panned out. ‘Rushed’ and ‘poorly written’ were common complaints while plot twists and deaths involving major female characters angered many others.

Similar restrictions to those announced by the British government are in force in the Basque Country, but that doesn’t mean that the exploration for, and the extraction of, gas (and other fossil fuels) isn’t going ahead in the north of Spain. In 2020, the Basque Government will use conventional methods to begin exploring for gas in Subijana, Alava. Critics say that the money spent on this project should instead be used to invest in social and technological innovations that will create a new, sustainable framework for current and future renewable energies.