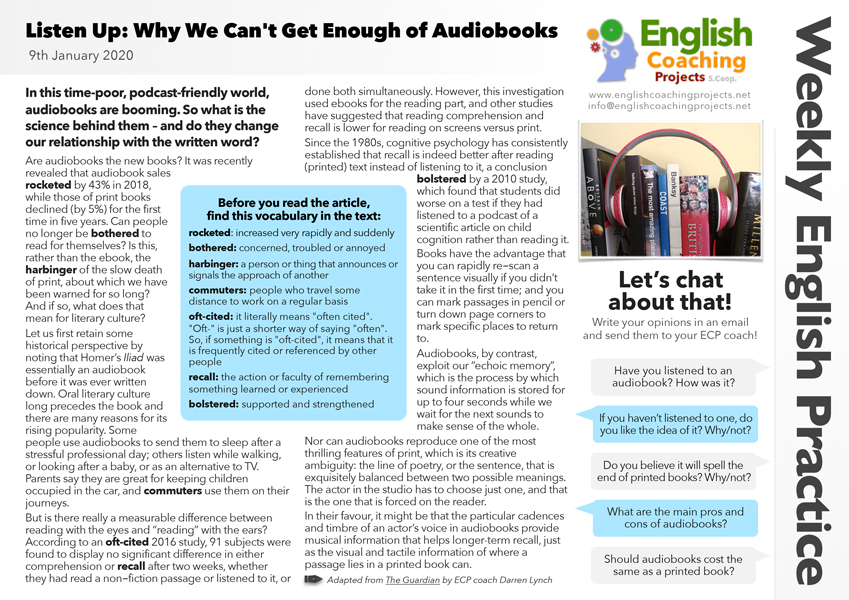 Have you ever listened to an audiobook? In this week’s Weekly English Practice, ECP coach Darren talks about audiobooks and how they might help him be more efficient with his time.

harbinger: a person or thing that announces or signals the approach of another

commuters: people who travel some distance to work on a regular basis

oft-cited: it literally means “often cited”. “Oft-” is just a shorter way of saying “often”. So, if something is “oft-cited”, it means that it is frequently cited or referenced by other people

recall: the action or faculty of remembering something learned or experienced

In this time-poor, podcast-friendly world, audiobooks are booming. So what is the science behind them – and do they change our relationship with the written word?

Are audiobooks the new books? It was recently revealed that audiobook sales rocketed by 43% in 2018, while those of print books declined (by 5%) for the first time in five years. Can people no longer be bothered to read for themselves? Is this, rather than the ebook, the harbinger of the slow death of print, about which we have been warned for so long? And if so, what does that mean for literary culture?

Let us first retain some historical perspective by noting that Homer’s Iliad was essentially an audiobook before it was ever written down. Oral literary culture long precedes the book and there are many reasons for its rising popularity. Some people use audiobooks to send them to sleep after a stressful professional day; others listen while walking, or looking after a baby, or as an alternative to TV. Parents say they are great for keeping children occupied in the car, and commuters use them on their journeys.

But is there really a measurable difference between reading with the eyes and “reading” with the ears? According to an oft-cited 2016 study, 91 subjects were found to display no significant difference in either comprehension or recall after two weeks, whether they had read a non‑fiction passage or listened to it, or done both simultaneously. However, this investigation used ebooks for the reading part, and other studies have suggested that reading comprehension and recall is lower for reading on screens versus print.

Since the 1980s, cognitive psychology has consistently established that recall is indeed better after reading (printed) text instead of listening to it, a conclusion bolstered by a 2010 study, which found that students did worse on a test if they had listened to a podcast of a scientific article on child cognition rather than reading it.

Books have the advantage that you can rapidly re‑scan a sentence visually if you didn’t take it in the first time; and you can mark passages in pencil or turn down page corners to mark specific places to return to.

Audiobooks, by contrast, exploit our “echoic memory”, which is the process by which sound information is stored for up to four seconds while we wait for the next sounds to make sense of the whole.

Nor can audiobooks reproduce one of the most thrilling features of print, which is its creative ambiguity: the line of poetry, or the sentence, that is exquisitely balanced between two possible meanings. The actor in the studio has to choose just one, and that is the one that is forced on the reader.

In their favour, it might be that the particular cadences and timbre of an actor’s voice in audiobooks provide musical information that helps longer-term recall, just as the visual and tactile information of where a passage lies in a printed book can.

Adapted from The Guardian by ECP coach Darren Lynch