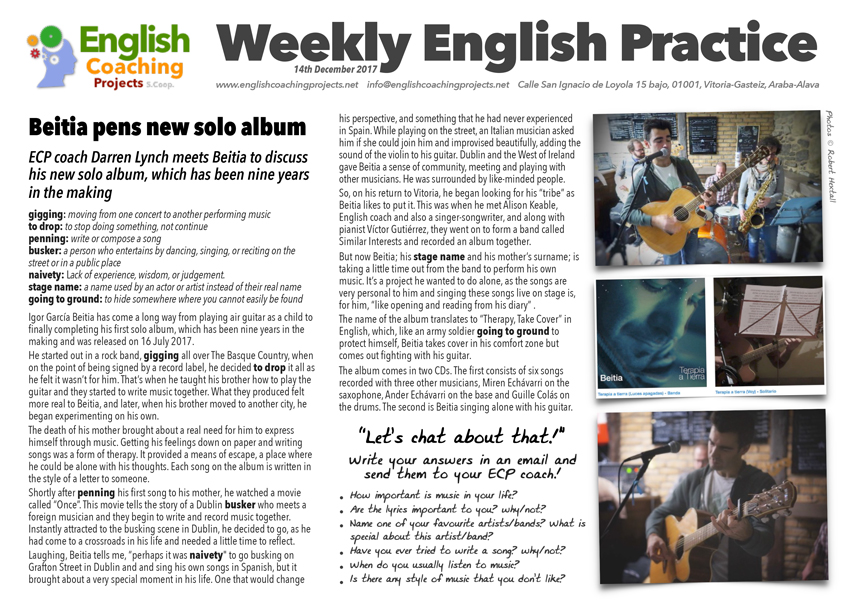 Before you read the complete article, look at this vocabulary and find it in the text

gigging: moving from one concert to another performing music

to drop: to stop doing something, not continue

penning: write or compose a song

busker: a person who entertains by dancing, singing, or reciting on the street or in a public place

stage name: a name used by an actor or artist instead of their real name

going to ground: to hide somewhere where you cannot easily be found

ECP coach Darren Lynch meets Beitia to discuss his new solo album, which has been nine years in the making

Igor García Beitia has come a long way from playing air guitar as a child to finally completing his first solo album, which has been nine years in the making and was released on 16 July 2017.

He started out in a rock band, gigging all over The Basque Country, when on the point of being signed by a record label, he decided to drop it all as he felt it wasn’t for him. That’s when he taught his brother how to play the guitar and they started to write music together. What they produced felt more real to Beitia, and later, when his brother moved to another city, he began experimenting on his own.

The death of his mother brought about a real need for him to express himself through music. Getting his feelings down on paper and writing songs was a form of therapy. It provided a means of escape, a place where he could be alone with his thoughts. Each song on the album is written in the style of a letter to someone.

Shortly after penning his first song to his mother, he watched a movie called “Once”. This movie tells the story of a Dublin busker who meets a foreign musician and they begin to write and record music together. Instantly attracted to the busking scene in Dublin, he decided to go, as he had come to a crossroads in his life and needed a little time to reflect.

Laughing, Beitia tells me, “perhaps it was naivety” to go busking on Grafton Street in Dublin and and sing his own songs in Spanish, but it brought about a very special moment in his life. One that would change his perspective, and something that he had never experienced in Spain. While playing on the street, an Italian musician asked him if she could join him and improvised beautifully, adding the sound of the violin to his guitar. Dublin and the West of Ireland gave Beitia a sense of community, meeting and playing with other musicians. He was surrounded by like-minded people.

So, on his return to Vitoria, he began looking for his “tribe” as Beitia likes to put it. This was when he met Alison Keable, English coach and also a singer-songwriter, and along with pianist Víctor Gutiérrez, they went on to form a band called Similar Interests and recorded an album together.

But now Beitia; his stage name and his mother’s surname; is taking a little time out from the band to perform his own music. It’s a project he wanted to do alone, as the songs are very personal to him and singing these songs live on stage is, for him, “like opening and reading from his diary” .

The name of the album translates to “Therapy, Take Cover” in English, which, like an army soldier going to ground to protect himself, Beitia takes cover in his comfort zone but comes out fighting with his guitar.

The album comes in two CDs. The first consists of six songs recorded with three other musicians, Miren Echávarri on the saxophone, Ander Echávarri on the base and Guille Colás on the drums. The second is Beitia singing alone with his guitar.

Why not record your voice too? Listen to yourself speak and identify what you have to improve on ????