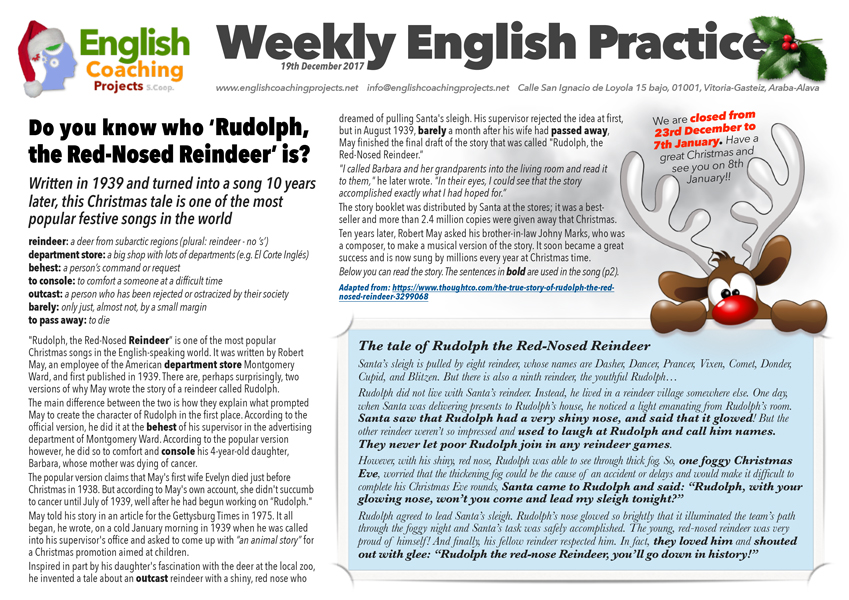 Before you read the complete article, look at this vocabulary and find it in the text

reindeer: a deer from subarctic regions (plural: reindeer – no ’s’)

behest: a person’s command or request

to console: to comfort a someone at a difficult time

outcast: a person who has been rejected or ostracized by their society

barely: only just, almost not, by a small margin

to pass away: to die

Written in 1939 and turned into a song 10 years later, this Christmas tale is one of the most popular festive songs in the world

“Rudolph, the Red-Nosed Reindeer” is one of the most popular Christmas songs in the English-speaking world. It was written by Robert May, an employee of the American department store Montgomery Ward, and first published in 1939. There are, perhaps surprisingly, two versions of why May wrote the story of a reindeer called Rudolph.

The main difference between the two is how they explain what prompted May to create the character of Rudolph in the first place. According to the official version, he did it at the behest of his supervisor in the advertising department of Montgomery Ward. According to the popular version however, he did so to comfort and console his 4-year-old daughter, Barbara, whose mother was dying of cancer.

The popular version claims that May’s first wife Evelyn died just before Christmas in 1938. But according to May’s own account, she didn’t succumb to cancer until July of 1939, well after he had begun working on “Rudolph.”

May told his story in an article for the Gettysburg Times in 1975. It all began, he wrote, on a cold January morning in 1939 when he was called into his supervisor’s office and asked to come up with “an animal story” for a Christmas promotion aimed at children.

Inspired in part by his daughter’s fascination with the deer at the local zoo, he invented a tale about an outcast reindeer with a shiny, red nose who dreamed of pulling Santa’s sleigh. His supervisor rejected the idea at first, but in August 1939, barely a month after his wife had passed away, May finished the final draft of the story that was called “Rudolph, the Red-Nosed Reindeer.”

“I called Barbara and her grandparents into the living room and read it to them,” he later wrote. “In their eyes, I could see that the story accomplished exactly what I had hoped for.”

The story booklet was distributed by Santa at the stores; it was a best-seller and more than 2.4 million copies were given away that Christmas.

Ten years later, Robert May asked his brother-in-law Johny Marks, who was a composer, to make a musical version of the story. It soon became a great success and is now sung by millions every year at Christmas time.

Below you can read the story. The sentences in bold are used in the song.

Why not record your voice too? Listen to yourself speak and identify what you have to improve on ????

The tale of Rudolph the Red-Nosed Reindeer

Santa’s sleigh is pulled by eight reindeer, whose names are Dasher, Dancer, Prancer, Vixen, Comet, Donder, Cupid, and Blitzen. But there is also a ninth reindeer, the youthful Rudolph…

Rudolph did not live with Santa’s reindeer. Instead, he lived in a reindeer village somewhere else. One day, when Santa was delivering presents to Rudolph’s house, he noticed a light emanating from Rudolph’s room. Santa saw that Rudolph had a very shiny nose, and said that it glowed! But the other reindeer weren’t so impressed and used to laugh at Rudolph and call him names. They never let poor Rudolph join in any reindeer games.

However, with his shiny, red nose, Rudolph was able to see through thick fog. So, one foggy Christmas Eve, worried that the thickening fog could be the cause of an accident or delays and would make it difficult to complete his Christmas Eve rounds, Santa came to Rudolph and said: “Rudolph, with your glowing nose, won’t you come and lead my sleigh tonight?”

Rudolph agreed to lead Santa’s sleigh. Rudolph’s nose glowed so brightly that it illuminated the team’s path through the foggy night and Santa’s task was safely accomplished. The young, red-nosed reindeer was very proud of himself! And finally, his fellow reindeer respected him. In fact, they loved him and shouted out with glee: “Rudolph the red-nose Reindeer, you’ll go down in history!”

Rudolph the red-nosed reindeer, Had a very shiny nose

And if you ever saw it, You would even say it glows

All of the other reindeer, Used to laugh and call him names

They never let poor Rudolph, Play in any reindeer games

Then one foggy Christmas Eve, Santa came to say

Rudolph with your nose so bright, Won’t you guide my sleigh tonight?

Then all the reindeer loved him, And they shouted out with glee

“Rudolph the red-nosed reindeer, You’ll go down in history!”