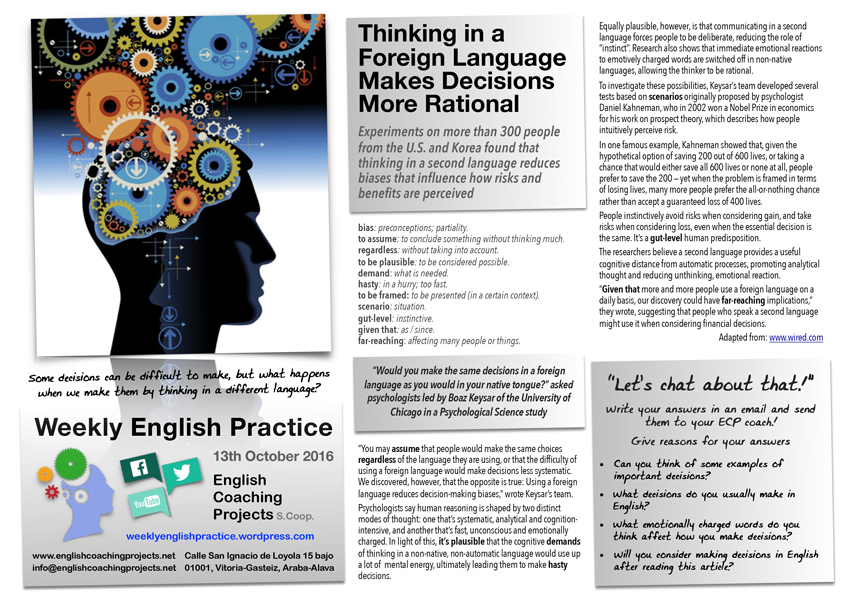 Experiments on more than 300 people from the U.S. and Korea found that thinking in a second language reduces biases that influence how risks and benefits are perceived

to assume: to conclude something without thinking much.

to be plausible: to be considered possible.

demand: what is needed.

hasty: in a hurry; too fast.

to be framed: to be presented (in a certain context).

far-reaching: affecting many people or things.

Psychologists say human reasoning is shaped by two distinct modes of thought: one that’s systematic, analytical and cognition-intensive, and another that’s fast, unconscious and emotionally charged. In light of this, it’s plausible that the cognitive demands of thinking in a non-native, non-automatic language would use up a lot of  mental energy, ultimately leading them to make hasty decisions.

Equally plausible, however, is that communicating in a second language forces people to be deliberate, reducing the role of “instinct”. Research also shows that immediate emotional reactions to emotively charged words are switched off in non-native languages, allowing the thinker to be rational.

To investigate these possibilities, Keysar’s team developed several tests based on scenarios originally proposed by psychologist Daniel Kahneman, who in 2002 won a Nobel Prize in economics for his work on prospect theory, which describes how people intuitively perceive risk.

In one famous example, Kahneman showed that, given the hypothetical option of saving 200 out of 600 lives, or taking a chance that would either save all 600 lives or none at all, people prefer to save the 200 — yet when the problem is framed in terms of losing lives, many more people prefer the all-or-nothing chance rather than accept a guaranteed loss of 400 lives.

“Given that more and more people use a foreign language on a daily basis, our discovery could have far-reaching implications,” they wrote, suggesting that people who speak a second language might use it when considering financial decisions.