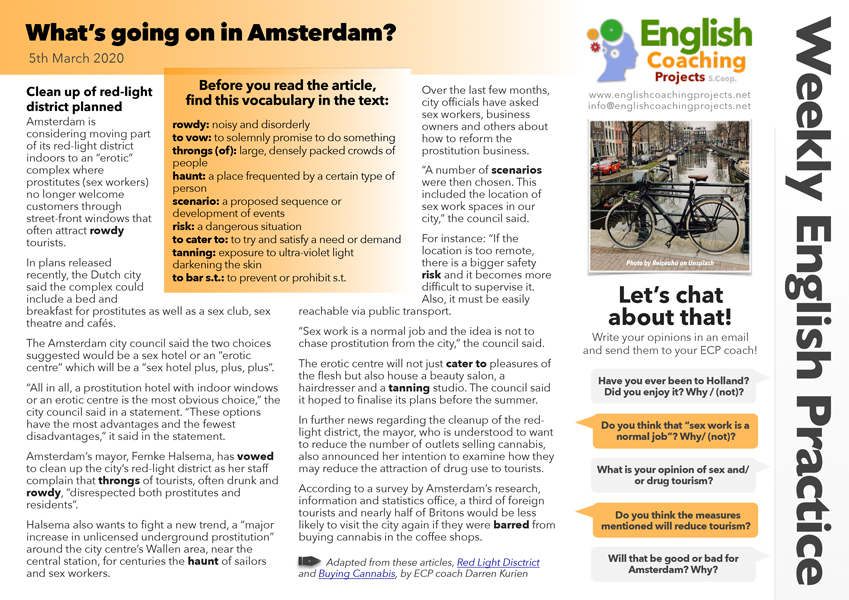 to vow: to solemnly promise to do something

haunt: a place frequented by a certain type of person

scenario: a proposed sequence or development of events

to cater to: to try and satisfy a need or demand

to bar s.t.: to prevent or prohibit s.t.

Clean up of red-light district planned

In plans released recently, the Dutch city said the complex could include a bed and breakfast for prostitutes as well as a sex club, sex theatre and cafés.

Amsterdam’s mayor, Femke Halsema, has vowed to clean up the city’s red-light district as her staff complain that throngs of tourists, often drunk and rowdy, “disrespected both prostitutes and residents”.

Halsema also wants to fight a new trend, a “major increase in unlicensed underground prostitution” around the city centre’s Wallen area, near the central station, for centuries the haunt of sailors and sex workers.

Over the last few months, city officials have asked sex workers, business owners and others about how to reform the prostitution business.

“A number of scenarios were then chosen. This included the location of sex work spaces in our city,” the council said.

For instance: “If the location is too remote, there is a bigger safety risk and it becomes more difficult to supervise it. Also, it must be easily reachable via public transport.

“Sex work is a normal job and the idea is not to chase prostitution from the city,” the council said.

In further news regarding the cleanup of the red-light district, the mayor, who is understood to want to reduce the number of outlets selling cannabis, also announced her intention to examine how they may reduce the attraction of drug use to tourists.

According to a survey by Amsterdam’s research, information and statistics office, a third of foreign tourists and nearly half of Britons would be less likely to visit the city again if they were barred from buying cannabis in the coffee shops.

Have you ever been to Holland? Did you enjoy it? Why (not)?

What is your opinion of sex and/or drug tourism?

Do you think the measures mentioned will reduce tourism?

Will that be good or bad for Amsterdam? Why?