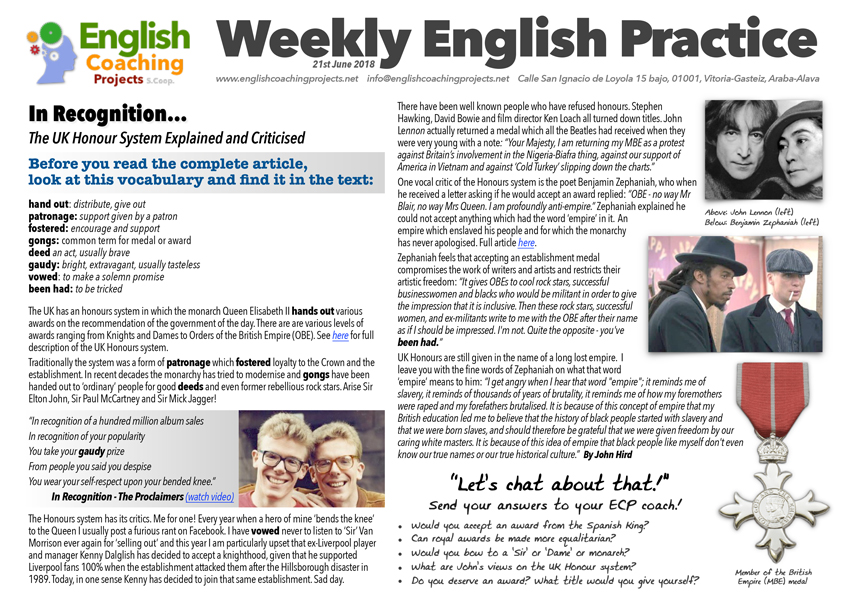 In Recognition… The UK Honour System Explained and Criticised

hand out: distribute, give out

patronage: support given by a patron

vowed: to make a solemn promise

been had: to be tricked

The UK has an honours system in which the monarch Queen Elisabeth II hands out various awards on the recommendation of the government of the day. There are are various levels of awards ranging from Knights and Dames to Orders of the British Empire (OBE). See here for full description of the UK Honours system.

Traditionally the system was a form of patronage which fostered loyalty to the Crown and the establishment. In recent decades the monarchy has tried to modernise and gongs have been handed out to ‘ordinary’ people for good deeds and even former rebellious rock stars. Arise Sir Elton John, Sir Paul McCartney and Sir Mick Jagger!

“In recognition of a hundred million album sales

In recognition of your popularity

You take your gaudy prize

From people you said you despise

You wear your self-respect upon your bended knee.”

In Recognition – The Proclaimers (watch video)

The Honours system has its critics. Me for one! Every year when a hero of mine ‘bends the knee’ to the Queen I usually post a furious rant on Facebook. I have vowed never to listen to ‘Sir’ Van Morrison ever again for ‘selling out’ and this year I am particularly upset that ex-Liverpool player and manager Kenny Dalglish has decided to accept a knighthood, given that he supported Liverpool fans 100% when the establishment attacked them after the Hillsborough disaster in 1989. Today, in one sense Kenny has decided to join that same establishment. Sad day.

There have been well known people who have refused honours. Stephen Hawking, David Bowie and film director Ken Loach all turned down titles. John Lennon actually returned a medal which all the Beatles had received when they were very young with a note: “Your Majesty, I am returning my MBE as a protest against Britain’s involvement in the Nigeria-Biafra thing, against our support of America in Vietnam and against ‘Cold Turkey’ slipping down the charts.”

One vocal critic of the Honours system is the poet Benjamin Zephaniah, who when he received a letter asking if he would accept an award replied: “OBE – no way Mr Blair, no way Mrs Queen. I am profoundly anti-empire.” Zephaniah explained he could not accept anything which had the word ‘empire’ in it.  An empire which enslaved his people and for which the monarchy has never apologised. Full article here.

Zephaniah feels that accepting an establishment medal compromises the work of writers and artists and restricts their artistic freedom: “It gives OBEs to cool rock stars, successful businesswomen and blacks who would be militant in order to give the impression that it is inclusive. Then these rock stars, successful women, and ex-militants write to me with the OBE after their name as if I should be impressed. I’m not. Quite the opposite – you’ve been had.“

UK Honours are still given in the name of a long lost empire.  I leave you with the fine words of Zephaniah on what that word ‘empire’ means to him: “I get angry when I hear that word “empire”; it reminds me of slavery, it reminds of thousands of years of brutality, it reminds me of how my foremothers were raped and my forefathers brutalised. It is because of this concept of empire that my British education led me to believe that the history of black people started with slavery and that we were born slaves, and should therefore be grateful that we were given freedom by our caring white masters. It is because of this idea of empire that black people like myself don’t even know our true names or our true historical culture.”  By John Hird