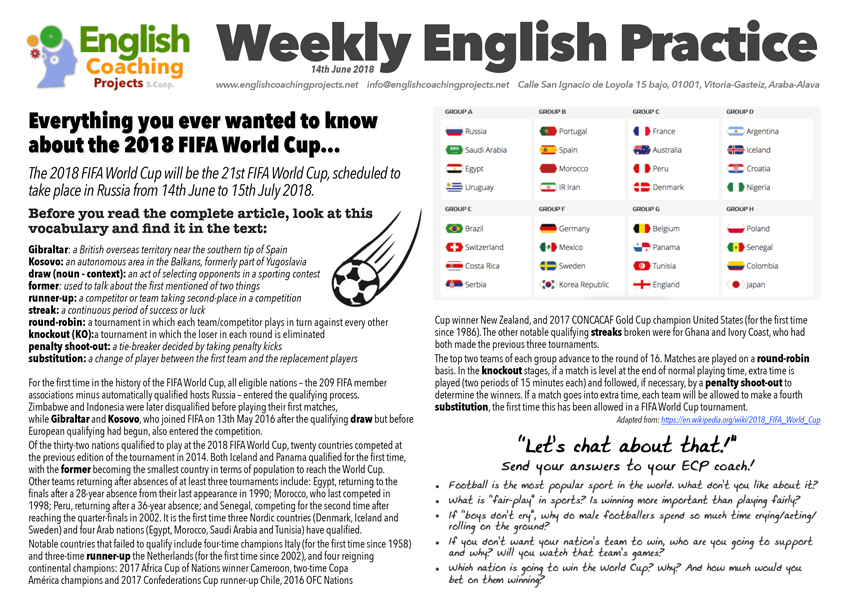 Gibraltar: a British overseas territory near the southern tip of Spain

Kosovo: an autonomous area in the Balkans, formerly part of Yugoslavia

draw (noun – context): an act of selecting opponents in a sporting contest

former: used to talk about the first mentioned of two things

runner-up: a competitor or team taking second place in a competition

streak: a continuous period of success or luck

round-robin: a tournament in which each team/competitor plays in turn against every other

knockout (KO): a tournament in which the loser in each round is eliminated

substitution: a change of player between the first team and the replacement players

For the first time in the history of the FIFA World Cup, all eligible nations – the 209 FIFA member associations minus automatically qualified hosts Russia – entered the qualifying process. Zimbabwe and Indonesia were later disqualified before playing their first matches, while Gibraltar and Kosovo, who joined FIFA on 13th May 2016 after the qualifying draw but before European qualifying had begun, also entered the competition.

Of the thirty-two nations qualified to play at the 2018 FIFA World Cup, twenty countries competed at the previous edition of the tournament in 2014. Both Iceland and Panama qualified for the first time, with the former becoming the smallest country in terms of population to reach the World Cup.
Other teams returning after absences of at least three tournaments include: Egypt, returning to the finals after a 28-year absence from their last appearance in 1990; Morocco, who last competed in 1998; Peru, returning after a 36-year absence; and Senegal, competing for the second time after reaching the quarter-finals in 2002. It is the first time three Nordic countries (Denmark, Iceland and Sweden) and four Arab nations (Egypt, Morocco, Saudi Arabia and Tunisia) have qualified.

The top two teams of each group advance to the round of 16. Matches are played on a round-robin basis. In the knockout stages, if a match is level at the end of normal playing time, extra time is played (two periods of 15 minutes each) and followed, if necessary, by a penalty shoot-out to determine the winners. If a match goes into extra time, each team will be allowed to make a fourth substitution, the first time this has been allowed in a FIFA World Cup tournament.