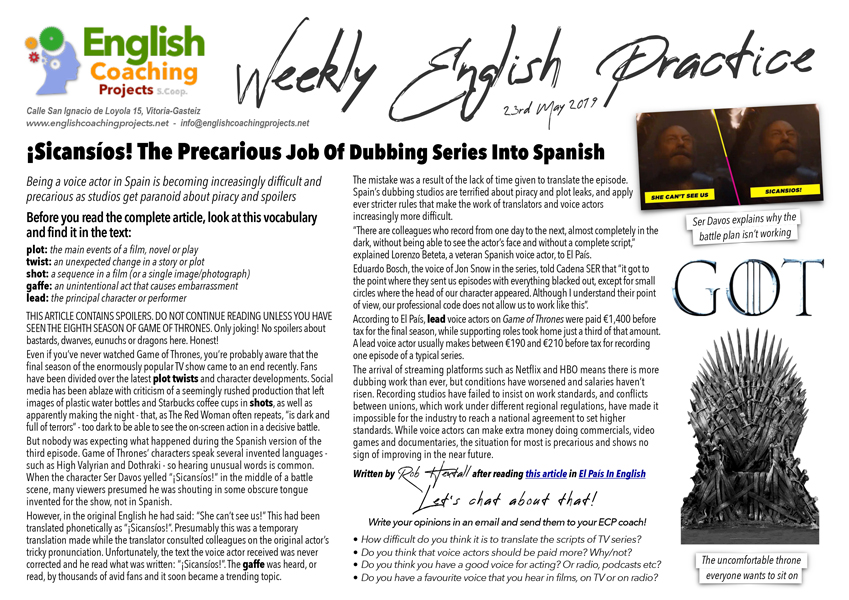 ECP Coach Rob is a big fan of Game of Thrones. In this week’s Weekly English Practice he talks about a problem that happened in the Spanish dubbing of a recent episode. Do you know what “Sicansíos” means?

plot: the main events of a film, novel or play

twist: an unexpected change in a story or plot

shot: a sequence in a film (or a single image/photograph)

lead: the principal character or performer

THIS ARTICLE CONTAINS SPOILERS. DO NOT CONTINUE READING UNLESS YOU HAVE SEEN THE EIGHTH SEASON OF GAME OF THRONES. Only joking! No spoilers about bastards, dwarves, eunuchs or dragons here. Honest!

Even if you’ve never watched Game of Thrones, you’re probably aware that the final season of the enormously popular TV show came to an end recently. Fans have been divided over the latest plot twists and character developments. Social media has been ablaze with criticism of a seemingly rushed production that left images of plastic water bottles and Starbucks coffee cups in shots, as well as apparently making the night – that, as The Red Woman often repeats, “is dark and full of terrors” – too dark to be able to see the on-screen action in a decisive battle.

But nobody was expecting what happened during the Spanish version of the third episode. Game of Thrones’ characters speak several invented languages – such as High Valyrian and Dothraki – so hearing unusual words is common. When the character Ser Davos yelled “¡Sicansíos!” in the middle of a battle scene, many viewers presumed he was shouting in some obscure tongue invented for the show, not in Spanish.

However, in the original English he had said: “She can’t see us!” This had been translated phonetically as “¡Sicansíos!”. Presumably this was a temporary translation made while the translator consulted colleagues on the original actor’s tricky pronunciation. Unfortunately, the text the voice actor received was never corrected and he read what was written: “¡Sicansíos!”. The gaffe was heard, or read, by thousands of avid fans and it soon became a trending topic.

The mistake was a result of the lack of time given to translate the episode. Spain’s dubbing studios are terrified about piracy and plot leaks, and apply ever stricter rules that make the work of translators and voice actors increasingly more difficult.

“There are colleagues who record from one day to the next, almost completely in the dark, without being able to see the actor’s face and without a complete script,” explained Lorenzo Beteta, a veteran Spanish voice actor, to El País.

Eduardo Bosch, the voice of Jon Snow in the series, told Cadena SER that “it got to the point where they sent us episodes with everything blacked out, except for small circles where the head of our character appeared. Although I understand their point of view, our professional code does not allow us to work like this”.

The arrival of streaming platforms such as Netflix and HBO means there is more dubbing work than ever, but conditions have worsened and salaries haven’t risen. Recording studios have failed to insist on work standards, and conflicts between unions, which work under different regional regulations, have made it impossible for the industry to reach a national agreement to set higher standards. While voice actors can make extra money doing commercials, video games and documentaries, the situation for most is precarious and shows no sign of improving in the near future.