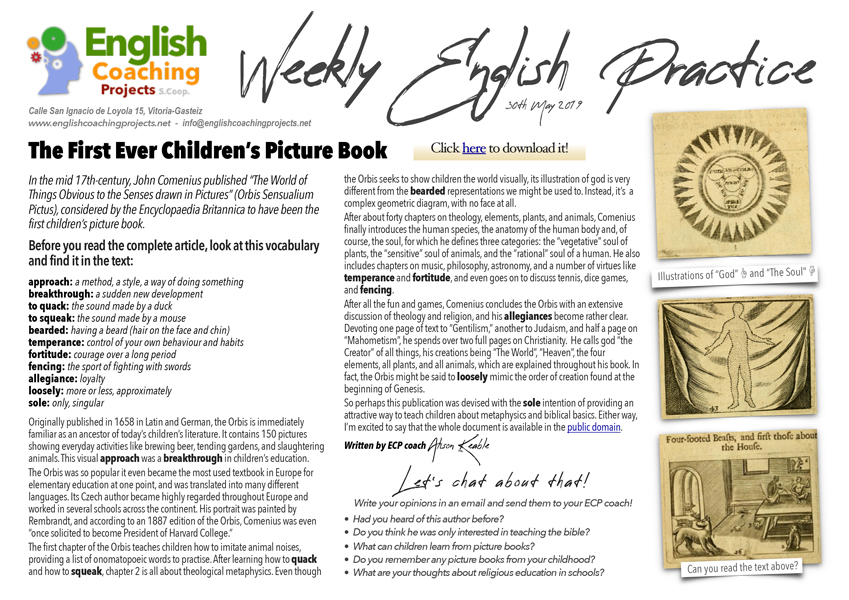 In the mid 17th-century, John Comenius published “The World of Things Obvious to the Senses drawn in Pictures” (Orbis Sensualium Pictus), considered by the Encyclopaedia Britannica to have been the first children’s picture book

approach: a method, a style, a way of doing something

to quack: the sound made by a duck

to squeak: the sound made by a mouse

bearded: having a beard (hair on the face and chin)

temperance: control of your own behaviour and habits

fortitude: courage over a long period

fencing: the sport of fighting with swords

Originally published in 1658 in Latin and German, the Orbis is immediately familiar as an ancestor of today’s children’s literature. It contains 150 pictures showing everyday activities like brewing beer, tending gardens, and slaughtering animals. This visual approach was a breakthrough in children’s education.

The Orbis was so popular it even became the most used textbook in Europe for elementary education at one point, and was translated into many different languages. Its Czech author became highly regarded throughout Europe and worked in several schools across the continent. His portrait was painted by Rembrandt, and according to an 1887 edition of the Orbis, Comenius was even “once solicited to become President of Harvard College.”

The first chapter of the Orbis teaches children how to imitate animal noises, providing a list of onomatopoeic words to practise. After learning how to quack and how to squeak, chapter 2 is all about theological metaphysics. Even though the Orbis seeks to show children the world visually, its illustration of god is very different from the bearded representations we might be used to. Instead, it’s  a complex geometric diagram, with no face at all.

After about forty chapters on theology, elements, plants, and animals, Comenius finally introduces the human species, the anatomy of the human body and, of course, the soul, for which he defines three categories: the “vegetative” soul of plants, the “sensitive” soul of animals, and the “rational” soul of a human. He also includes chapters on music, philosophy, astronomy, and a number of virtues like temperance and fortitude, and even goes on to discuss tennis, dice games, and fencing.

After all the fun and games, Comenius concludes the Orbis with an extensive discussion of theology and religion, and his allegiances become rather clear. Devoting one page of text to “Gentilism,” another to Judaism, and half a page on “Mahometism”, he spends over two full pages on Christianity.  He calls god “the Creator” of all things, his creations being “The World”, “Heaven”, the four elements, all plants, and all animals, which are explained throughout his book. In fact, the Orbis might be said to loosely mimic the order of creation found at the beginning of Genesis.

So perhaps this publication was devised with the sole intention of providing an attractive way to teach children about metaphysics and biblical basics. Either way, I’m excited to say that the whole document is available in the public domain.