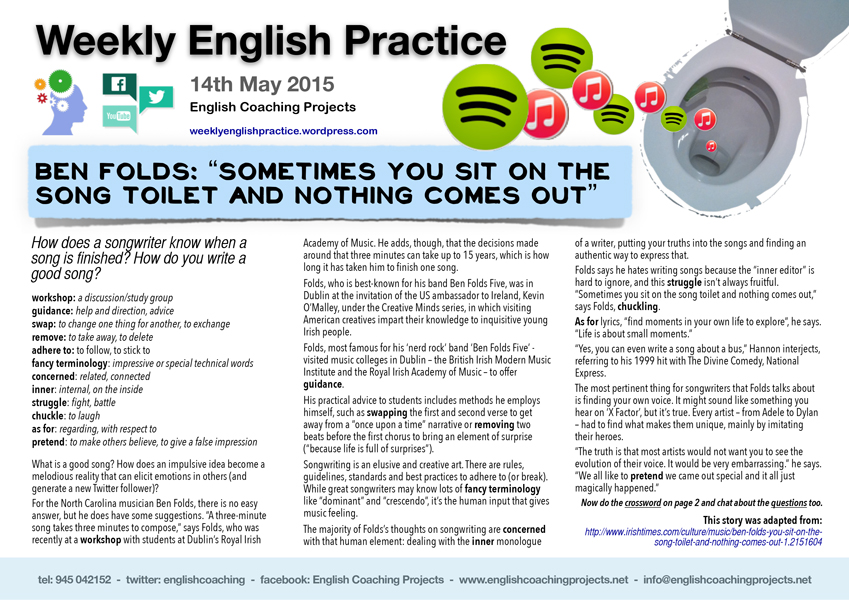 swap: to change one thing for another, to exchange

remove: to take away, to delete

inner: internal, on the inside

as for: regarding, with respect to

pretend: to make others believe, to give a false impression

How does a songwriter know when a song is finished? How do you write a good song?

What is a good song? How does an impulsive idea become a melodious reality that can elicit emotions in others (and generate a new Twitter follower)? For the North Carolina musician Ben Folds, there is no easy answer, but he does have some suggestions. “A three-minute song takes three minutes to compose,” says Folds, who was recently at a workshop with students at Dublin’s Royal Irish Academy of Music. He adds, though, that the decisions made around that three minutes can take up to 15 years, which is how long it has taken him to finish one song.

Folds, who is best-known for his band Ben Folds Five, was in Dublin at the invitation of the US ambassador to Ireland, Kevin O’Malley, under the Creative Minds series, in which visiting American creatives impart their knowledge to inquisitive young Irish people. Folds, most famous for his ‘nerd rock’ band ‘Ben Folds Five’ – visited music colleges in Dublin – the British Irish Modern Music Institute and the Royal Irish Academy of Music – to offer guidance.

His practical advice to students includes methods he employs himself, such as swapping the first and second verse to get away from a “once upon a time” narrative or removing two beats before the first chorus to bring an element of surprise (“because life is full of surprises”). Songwriting is an elusive and creative art.

There are rules, guidelines, standards and best practices to adhere to (or break). While great songwriters may know lots of fancy terminology like “dominant” and “crescendo”, it’s the human input that gives music feeling. The majority of Folds’s thoughts on songwriting are concerned with that human element: dealing with the inner monologue of a writer, putting your truths into the songs and finding an authentic way to express that.

Folds says he hates writing songs because the “inner editor” is hard to ignore, and this struggle isn’t always fruitful. “Sometimes you sit on the song toilet and nothing comes out,” says Folds, chuckling. As for lyrics, “find moments in your own life to explore”, he says. “Life is about small moments.” “Yes, you can even write a song about a bus,” Hannon interjects, referring to his 1999 hit with The Divine Comedy, National Express.

The most pertinent thing for songwriters that Folds talks about is finding your own voice. It might sound like something you hear on ‘X Factor’, but it’s true. Every artist – from Adele to Dylan – had to find what makes them unique, mainly by imitating their heroes. “The truth is that most artists would not want you to see the evolution of their voice. It would be very embarrassing.” he says. “We all like to pretend we came out special and it all just magically happened.”

This story was adapted from: http://www.irishtimes.com/culture/music/ben-folds-you-sit-on-the-song-toilet-and-nothing-comes-out-1.2151604