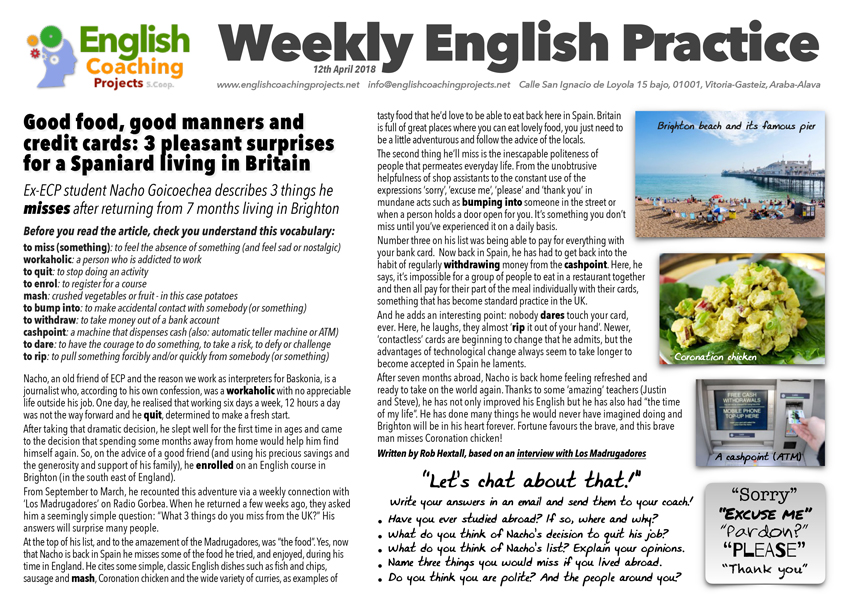 Before you read the article, check you understand this vocabulary:

to miss (something): to feel the absence of something (and feel sad or nostalgic)

workaholic: a person who is addicted to work

to quit: to stop doing an activity

to enrol: to register for a course

mash: crushed vegetables or fruit – in this case potatoes

to bump into: to make accidental contact with somebody (or something)

to withdraw: to take money out of a bank account

to dare: to have the courage to do something, to take a risk, to defy or challenge

to rip: to pull something forcibly and/or quickly from somebody (or something)

Nacho, an old friend of ECP and the reason we work as interpreters for Baskonia, is a journalist who, according to his own confession, was a workaholic with no appreciable life outside his job. One day, he realised that working six days a week, 12 hours a day was not the way forward and he quit, determined to make a fresh start.

After taking that dramatic decision, he slept well for the first time in ages and came to the decision that spending some months away from home would help him find himself again. So, on the advice of a good friend (and using his precious savings and the generosity and support of his family), he enrolled on an English course in Brighton (in the south east of England).

From September to March, he recounted this adventure via a weekly connection with ‘Los Madrugadores’ on Radio Gorbea. When he returned a few weeks ago, they asked him a seemingly simple question: “What 3 things do you miss from the UK?” His answers will surprise many people.

At the top of his list, and to the amazement of the Madrugadores, was “the food”. Yes, now that Nacho is back in Spain he misses some of the food he tried, and enjoyed, during his time in England. He cites some simple, classic English dishes such as fish and chips, sausage and mash, Coronation chicken and the wide variety of curries, as examples of tasty food that he’d love to be able to eat back here in Spain. Britain is full of great places where you can eat lovely food, you just need to be a little adventurous and follow the advice of the locals.

The second thing he’ll miss is the inescapable politeness of people that permeates everyday life. From the unobtrusive helpfulness of shop assistants to the constant use of the expressions ‘sorry’, ‘excuse me’, ‘please’ and ‘thank you’ in mundane acts such as bumping into someone in the street or when a person holds a door open for you. It’s something you don’t miss until you’ve experienced it on a daily basis.

Number three on his list was being able to pay for everything with your bank card.  Now back in Spain, he has had to get back into the habit of regularly withdrawing money from the cashpoint. Here, he says, it’s impossible for a group of people to eat in a restaurant together and then all pay for their part of the meal individually with their cards, something that has become standard practice in the UK.

And he adds an interesting point: nobody dares touch your card, ever. Here, he laughs, they almost ’rip it out of your hand’. Newer, ‘contactless’ cards are beginning to change that he admits, but the advantages of technological change always seem to take longer to become accepted in Spain he laments.

After seven months abroad, Nacho is back home feeling refreshed and ready to take on the world again. Thanks to some ‘amazing’ teachers (Justin and Steve), he has not only improved his English but he has also had “the time of my life”. He has done many things he would never have imagined doing and Brighton will be in his heart forever. Fortune favours the brave, and this brave man misses Coronation chicken!

Written by Rob Hextall, based on an interview with Los Madrugadores

Write your answers in an email and send them to your coach!