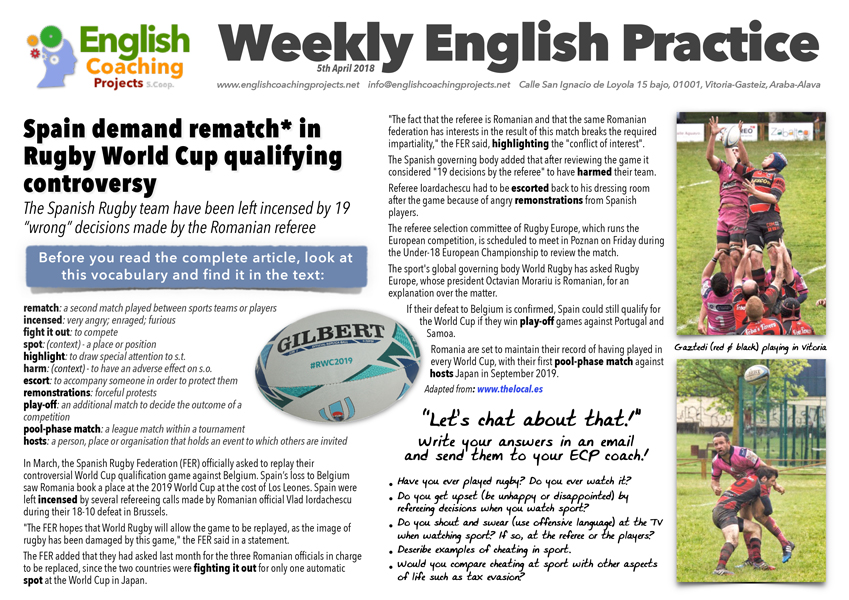 rematch: a second match played between sports teams or players

fight it out: to compete

spot: (context) – a place or position

harm: (context) – to have an adverse effect on s.o.

escort: to accompany someone in order to protect them

play-off: an additional match to decide the outcome of a competition

pool-phase match: a league match within a tournament

hosts: a person, place or organisation that holds an event to which others are invited

In March, the Spanish Rugby Federation (FER) officially asked to replay their controversial World Cup qualification game against Belgium. Spain’s loss to Belgium saw Romania book a place at the 2019 World Cup at the cost of Los Leones. Spain were left incensed by several refereeing calls made by Romanian official Vlad Iordachescu during their 18-10 defeat in Brussels.

“The FER hopes that World Rugby will allow the game to be replayed, as the image of rugby has been damaged by this game,” the FER said in a statement.

The FER added that they had asked last month for the three Romanian officials in charge to be replaced, since the two countries were fighting it out for only one automatic spot at the World Cup in Japan.

“The fact that the referee is Romanian and that the same Romanian federation has interests in the result of this match breaks the required impartiality,” the FER said, highlighting the “conflict of interest”.

The Spanish governing body added that after reviewing the game it considered “19 decisions by the referee” to have harmed their team.

Referee Ioardachescu had to be escorted back to his dressing room after the game because of angry remonstrations from Spanish players.

The referee selection committee of Rugby Europe, which runs the European competition, is scheduled to meet in Poznan on Friday during the Under-18 European Championship to review the match.

The sport’s global governing body World Rugby has asked Rugby Europe, whose president Octavian Morariu is Romanian, for an explanation over the matter.

If their defeat to Belgium is confirmed, Spain could still qualify for the World Cup if they win play-off games against Portugal and Samoa.

Romania are set to maintain their record of having played in every World Cup, with their first pool-phase match against hosts Japan in September 2019.