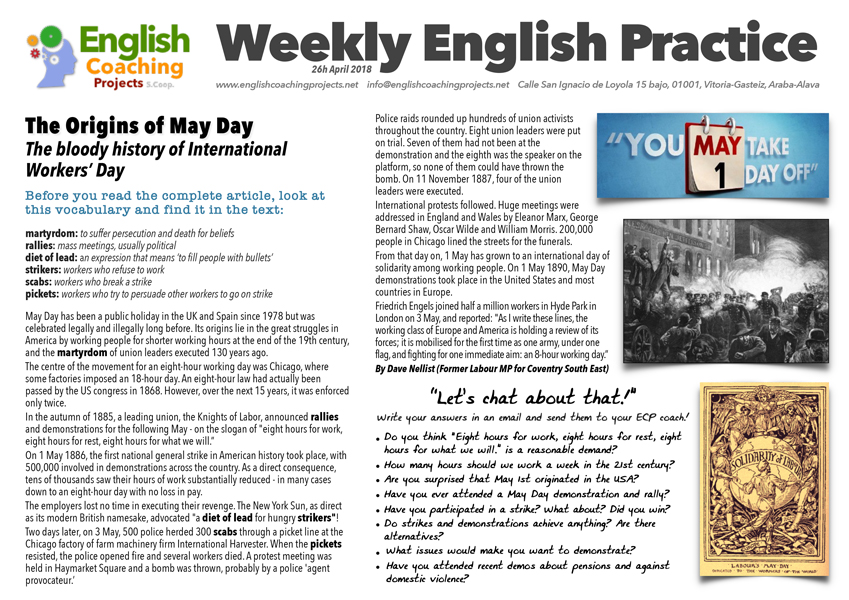 martyrdom: to suffer persecution and death for beliefs

diet of lead: an expression that means ‘to fill people with bullets’

strikers: workers who refuse to work

scabs: workers who break a strike

pickets: workers who try to persuade other workers to go on strike

May Day has been a public holiday in the UK and Spain since 1978 but was celebrated legally and illegally long before. Its origins lie in the great struggles in America by working people for shorter working hours at the end of the 19th century, and the martyrdom of union leaders executed 130 years ago.

The centre of the movement for an eight-hour working day was Chicago, where some factories imposed an 18-hour day. An eight-hour law had actually been passed by the US Congress in 1868. However, over the next 15 years, it was enforced only twice.

On 1 May 1886, the first national general strike in American history took place, with 500,000 involved in demonstrations across the country. As a direct consequence, tens of thousands saw their hours of work substantially reduced – in many cases down to an eight-hour day with no loss in pay.

The employers lost no time in executing their revenge. The New York Sun, as direct as its modern British namesake, advocated “a diet of lead for hungry strikers”!

Two days later, on 3 May, 500 police herded 300 scabs through a picket line at the Chicago factory of farm machinery firm International Harvester. When the pickets resisted, the police opened fire and several workers died. A protest meeting was held in Haymarket Square and a bomb was thrown, probably by a police ‘agent provocateur.’

Police raids rounded up hundreds of union activists throughout the country. Eight union leaders were put on trial. Seven of them had not been at the demonstration and the eighth was the speaker on the platform, so none of them could have thrown the bomb. On 11 November 1887, four of the union leaders were executed.

From that day on, 1 May has grown to an international day of solidarity among working people. On 1 May 1890, May Day demonstrations took place in the United States and most countries in Europe.

Friedrich Engels joined half a million workers in Hyde Park in London on 3 May, and reported: “As I write these lines, the working class of Europe and America is holding a review of its forces; it is mobilised for the first time as one army, under one flag, and fighting for one immediate aim: an 8-hour working day.”