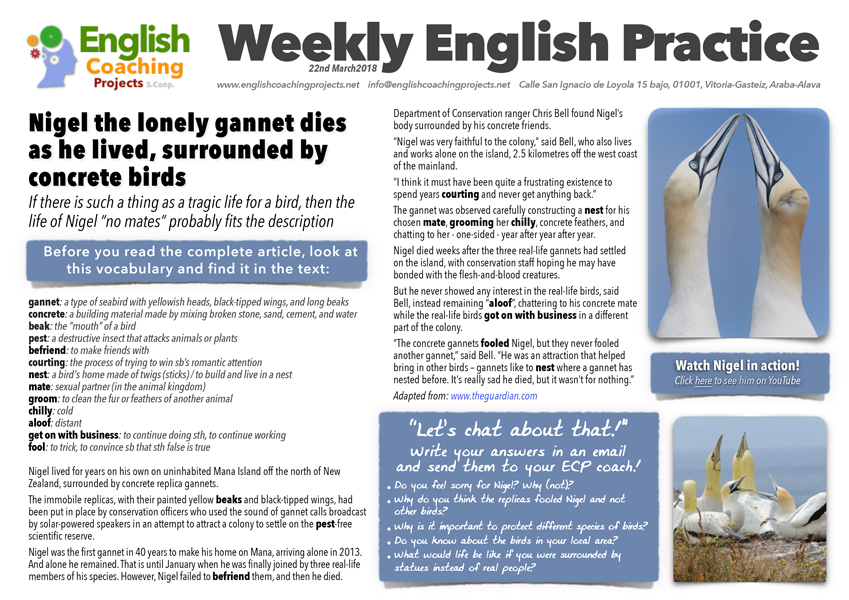 If there is such a thing as a tragic life for a bird, then the life of Nigel “no mates” probably fits the description. He lived and died alone, surrounded by concrete birds.

gannet: a type of seabird with yellowish heads, black-tipped wings, and long beaks

concrete: a building material made by mixing broken stone, sand, cement, and water

beak: the “mouth” of a bird

pest: a destructive insect that attacks animals or plants

befriend: to make friends with

courting: the process of trying to win sb’s romantic attention

nest: a bird’s home made of twigs (sticks) / to build and live in a nest

groom: to clean the fur or feathers of another animal

fool: to trick, to convince sb that sth false is true

Nigel lived for years on his own on uninhabited Mana Island off the north of New Zealand, surrounded by concrete replica gannets.

The immobile replicas, with their painted yellow beaks and black-tipped wings, had been put in place by conservation officers who used the sound of gannet calls broadcast by solar-powered speakers in an attempt to attract a colony to settle on the pest-free scientific reserve.

Nigel was the first gannet in 40 years to make his home on Mana, arriving alone in 2013. And alone he remained. That is until January when he was finally joined by three real-life members of his species. However, Nigel failed to befriend them, and then he died.

“Nigel was very faithful to the colony,” said Bell, who also lives and works alone on the island, 2.5 kilometres off the west coast of the mainland.

“I think it must have been quite a frustrating existence to spend years courting and never get anything back.”

The gannet was observed carefully constructing a nest for his chosen mate, grooming her chilly, concrete feathers, and chatting to her – one-sided – year after year after year.

Nigel died weeks after the three real-life gannets had settled on the island, with conservation staff hoping he may have bonded with the flesh-and-blood creatures.

“The concrete gannets fooled Nigel, but they never fooled another gannet,” said Bell. “He was an attraction that helped bring in other birds – gannets like to nest where a gannet has nested before. It’s really sad he died, but it wasn’t for nothing.”