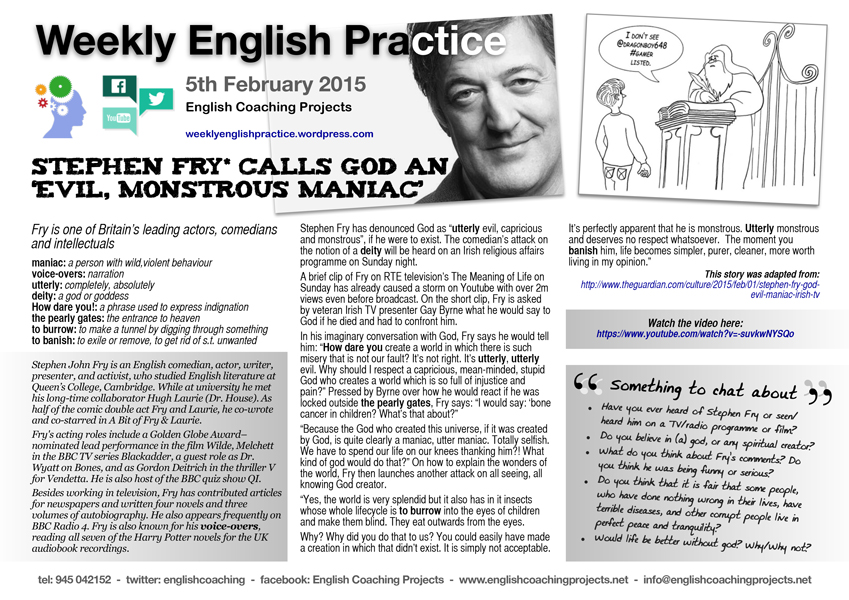 maniac: a person with wild,violent behaviour

deity: a god or goddess

How dare you!: a phrase used to express indignation

the pearly gates: the entrance to heaven

to burrow: to make a tunnel by digging through something

to banish: to exile or remove, to get rid of s.t. unwanted

Stephen Fry is one of Britain’s leading actors, comedians and intellectuals

Stephen John Fry is an English comedian, actor, writer, presenter, and activist, who studied English literature at Queen’s College, Cambridge. While at university he met his long-time collaborator Hugh Laurie (Dr. House). As half of the comic double act Fry and Laurie, he co-wrote and co-starred in A Bit of Fry & Laurie.

Fry’s acting roles include a Golden Globe Award–nominated lead performance in the film Wilde, Melchett in the BBC TV series Blackadder, a guest role as Dr. Wyatt on Bones, and as Gordon Deitrich in the thriller V for Vendetta. He is also host of the BBC quiz show QI.

Besides working in television, Fry has contributed articles for newspapers and written four novels and three volumes of autobiography. He also appears frequently on BBC Radio 4. Fry is also known for his voice-overs, reading all seven of the Harry Potter novels for the UK audiobook recordings.

Stephen Fry has denounced God as “utterly evil, capricious and monstrous”, if he were to exist. The comedian’s attack on the notion of a deity will be heard on an Irish religious affairs programme on Sunday night.

A brief clip of Fry on RTE television’s The Meaning of Life on Sunday has already caused a storm on Youtube with over 2m views even before broadcast. On the short clip, Fry is asked by veteran Irish TV presenter Gay Byrne what he would say to God if he died and had to confront him.

In his imaginary conversation with God, Fry says he would tell him: “How dare you create a world in which there is such misery that is not our fault? It’s not right. It’s utterly, utterly evil. Why should I respect a capricious, mean-minded, stupid God who creates a world which is so full of injustice and pain?” Pressed by Byrne over how he would react if he was locked outside the pearly gates, Fry says: “I would say: ‘bone cancer in children? What’s that about?”

“Because the God who created this universe, if it was created by God, is quite clearly a maniac, utter maniac. Totally selfish. We have to spend our life on our knees thanking him?! What kind of god would do that?” On how to explain the wonders of the world, Fry then launches another attack on all seeing, all knowing God creator.

“Yes, the world is very splendid but it also has in it insects whose whole lifecycle is to burrow into the eyes of children and make them blind. They eat outwards from the eyes.

Why? Why did you do that to us? You could easily have made a creation in which that didn’t exist. It is simply not acceptable.

It’s perfectly apparent that he is monstrous. Utterly monstrous and deserves no respect whatsoever.  The moment you banish him, life becomes simpler, purer, cleaner, more worth living in my opinion.”

Something to chat (and write) about

This story was adapted from: http://www.theguardian.com/culture/2015/feb/01/stephen-fry-god-evil-maniac-irish-tv