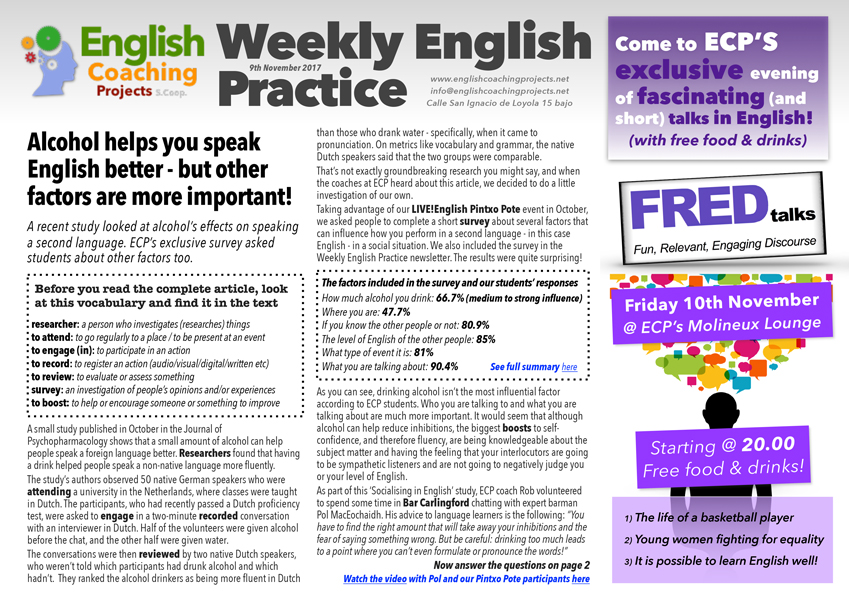 A recent study looked at alcohol’s effects on speaking a second language. ECP’s exclusive survey asked students about other factors too.

to attend: to go regularly to a place / to be present at an event

to engage (in): to participate in an action

to record: to register an action (audio/visual/digital/written etc)

to review: to evaluate or assess something

survey: an investigation of people’s opinions and/or experiences

to boost: to help or encourage someone or something to improve

A small study published in October in the Journal of Psychopharmacology shows that a small amount of alcohol can help people speak a foreign language better. Researchers found that having a drink helped people speak a non-native language more fluently.

The study’s authors observed 50 native German speakers who were attending a university in the Netherlands, where classes were taught in Dutch. The participants, who had recently passed a Dutch proficiency test, were asked to engage in a two-minute recorded conversation with an interviewer in Dutch. Half of the volunteers were given alcohol before the chat, and the other half were given water.

The conversations were then reviewed by two native Dutch speakers, who weren’t told which participants had drunk alcohol and which hadn’t.  They ranked the alcohol drinkers as being more fluent in Dutch than those who drank water – specifically, when it came to pronunciation. On metrics like vocabulary and grammar, the native Dutch speakers said that the two groups were comparable.

That’s not exactly groundbreaking research you might say, and when the coaches at ECP heard about this article, we decided to do a little investigation of our own.

Taking advantage of our LIVE!English Pintxo Pote event in October, we asked people to complete a short survey about several factors that can influence how you perform in a second language – in this case English – in a social situation. We also included the survey in the Weekly English Practice newsletter. The results were quite surprising!

As you can see, drinking alcohol isn’t the most influential factor according to ECP students. Who you are talking to and what you are talking about are much more important. It would seem that although alcohol can help reduce inhibitions, the biggest boosts to self-confidence, and therefore fluency, are being knowledgeable about the subject matter and having the feeling that your interlocutors are going to be sympathetic listeners and are not going to negatively judge you or your level of English.

As part of this ‘Socialising in English’ study, ECP coach Rob volunteered to spend some time in Bar Carlingford chatting with expert barman Pol MacEochaidh. His advice to language learners is the following: “You have to find the right amount that will take away your inhibitions and the fear of saying something wrong. But be careful: drinking too much leads to a point where you can’t even formulate or pronounce the words!”