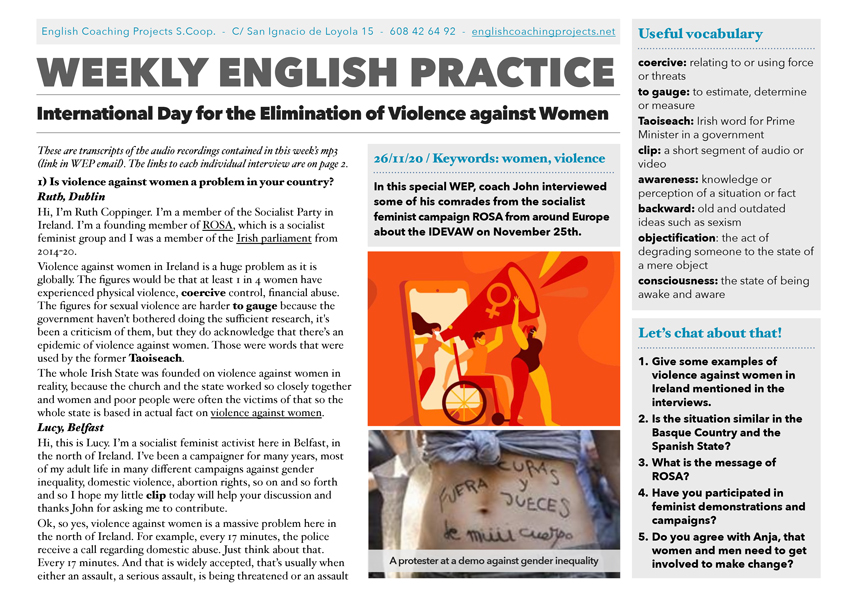 International Day for the Elimination of Violence against Women

In this special WEP, coach John interviewed some of his comrades from the socialist feminist campaign ROSA from around Europe about the International Day for the Elimination of Violence Against Women on November 25th.

coercive: relating to or using force or threats

to gauge: to estimate, determine or measure

Taoiseach: Irish word for Prime Minister in a government

clip: a short segment of audio or video

awareness: knowledge or perception of a situation or fact

backward: old and outdated ideas such as sexism

objectification: the act of degrading someone to the state of a mere object

consciousness: the state of being awake and aware

These are transcripts of the audio recordings contained in this week’s mp3.

In this special WEP, ECP coach John interviewed some of his comrades from the socialist feminist campaign ROSA from around Europe about the International Day for the Elimination of Violence Against Women on November 25th.

1) Is violence against women a problem in your country?

Hi, I’m Ruth Coppinger. I’m a member of the Socialist Party in Ireland. I’m a founding member of ROSA, which is a socialist feminist group and I was a member of the Irish parliament from 2014-20.

Violence against women in Ireland is a huge problem as it is globally. The figures would be that at least 1 in 4 women have experienced physical violence, coercive control, financial abuse. The figures for sexual violence are harder to gauge because the government haven’t bothered doing the sufficient research, it’s been a criticism of them, but they do acknowledge that there’s an epidemic of violence against women. Those were words that were used by the former Taoiseach.

Hi, this is Lucy. I’m a socialist feminist activist here in Belfast, in the north of Ireland. I’ve been a campaigner for many years, most of my adult life in many different campaigns against gender inequality, domestic violence, abortion rights, so on and so forth and so I hope my little clip today will help your discussion and thanks John for asking me to contribute.

Ok, so yes, violence against women is a massive problem here in the north of Ireland. For example, every 17 minutes, the police receive a call regarding domestic abuse. Just think about that. Every 17 minutes. And that is widely accepted, that’s usually when either an assault, a serious assault, is being threatened or an assault has already taken place. So, it’s a huge problem in society here in Northern Ireland. And also, just another example is during the pandemic, reported cases of domestic abuse rose by 25% and at the same time, services due to austerity over the last number of years has been absolutely starved and in many cases refuges have been actually shut down because they don’t have the money to continue.

2) What campaigns against violence against women have you been involved in?

Hello, My name is Emma from Ireland. I’m a member of ROSA. We are socialist feminist activists and we’ve campaigned for abortion rights in Ireland. We’ve campaigned to raise awareness of the impact of sexism, misogyny, oppression and gender violence. In 2018, we organised a protest of 8,000 people in Dublin. The protest was in solidarity with a young woman in Belfast who was victim-blamed and the main theme of the protest was to highlight how the court system in Ireland, North and South is extremely backward, sexist and misogynist.

3) How can we eliminate violence against women, once and for all?

I think that never before has there been such an intolerance of sexism, of racism and all types of inequality by ordinary working class people. All around the world we are seeing explosions of mass movements and struggle against femicide, macho culture, systematic sexism and racism. And I think those movements actually have an impact in terms of challenging backward attitudes, because they bring out the realities for women and the realities for people of colour. A key aspect of those movements has been solidarity and international solidarity. Socialist feminists understand that sexist stereotypes like the objectification of women, are consciously pushed by capitalism, because fundamentally, the system of capitalism has a vested interest in perpetuating division amongst ordinary people.

4) What is your main message for everyone this November 25th?

Shout it out clearly! Do it visibly! WE DO NOT ACCEPT THIS! Speak to your family, colleagues, friends, neighbours about this. And take this symbolic date as an opportunity to enhance consciousness in society about violence against women and how it leads to the highly unequal society that capitalism is and will always be. Organise yourself! Build solidarity with every group that is fighting oppression and discrimination and become part of the struggle of all the oppressed against the main oppressor. The parasitic capitalist class. No struggle, no gain! When we fight, we can win. When we don’t, we have already lost…

Many thanks to Ruth, Lucy, Anja, Emma, Viki, Karla & Maite

Let’s chat about violence against women.