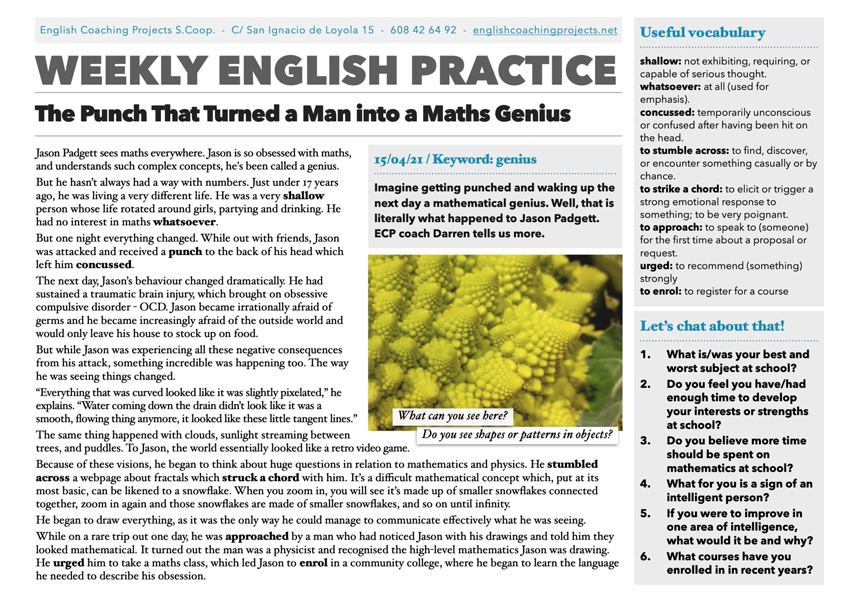 The Punch That Turned a Man into a Maths Genius

Imagine getting punched and waking up the next day a mathematical genius. Well, that is literally what happened to Jason Padgett. ECP coach Darren tells us more.

shallow: not exhibiting, requiring, or capable of serious thought.

whatsoever: at all (used for emphasis).

concussed: temporarily unconscious or confused after having been hit on the head.

to stumble across: to find, discover, or encounter something casually or by chance.

to strike a chord: to elicit or trigger a strong emotional response to something; to be very poignant.

to approach: to speak to (someone) for the first time about a proposal or request.

urged: to recommend (something) strongly

to enrol: to register for a course

Imagine getting punched and waking up the next day a mathematical genius. Well, that is literally what happened to Jason Padgett. ECP coach Darren tells us more.

Jason Padgett sees maths everywhere. Jason is so obsessed with maths, and understands such complex concepts, he’s been called a genius.

But he hasn’t always had a way with numbers. Just under 17 years ago, he was living a very different life. He was a very shallow person whose life rotated around girls, partying and drinking. He had no interest in maths whatsoever.

But one night everything changed. While out with friends, Jason was attacked and received a punch to the back of his head which left him concussed.

The next day, Jason’s behaviour changed dramatically. He had sustained a traumatic brain injury, which brought on obsessive compulsive disorder – OCD. Jason became irrationally afraid of germs and he became increasingly afraid of the outside world and would only leave his house to stock up on food.

But while Jason was experiencing all these negative consequences from his attack, something incredible was happening too. The way he was seeing things changed.

“Everything that was curved looked like it was slightly pixelated,” he explains. “Water coming down the drain didn’t look like it was a smooth, flowing thing anymore, it looked like these little tangent lines.”

The same thing happened with clouds, sunlight streaming between trees, and puddles. To Jason, the world essentially looked like a retro video game.

Because of these visions, he began to think about huge questions in relation to mathematics and physics. He stumbled across a webpage about fractals which struck a chord with him. It’s a difficult mathematical concept which, put at its most basic, can be likened to a snowflake. When you zoom in, you will see it’s made up of smaller snowflakes connected together, zoom in again and those snowflakes are made of smaller snowflakes, and so on until infinity.

He began to draw everything, as it was the only way he could manage to communicate effectively what he was seeing.

While on a rare trip out one day, he was approached by a man who had noticed Jason with his drawings and told him they looked mathematical. It turned out the man was a physicist and recognised the high-level mathematics Jason was drawing. He urged him to take a maths class, which led Jason to enrol in a community college, where he began to learn the language he needed to describe his obsession.

But why was he seeing things in such a strange and different way? Why was his world now comprised of geometric shapes and graphs?

Jason was formally diagnosed with acquired savant syndrome and a form of synaesthesia. Since his diagnosis, he has published a book about his experience, called Struck by Genius, and has toured the world telling people his story and educating them about maths.

Let’s chat about being a genius!