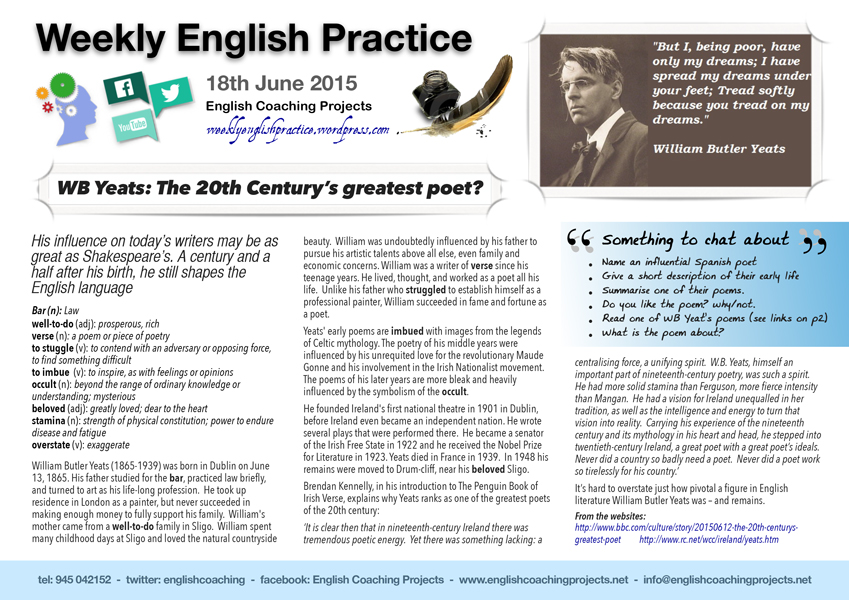 verse (n): a poem or piece of poetry

to stuggle (v): to contend with an adversary or opposing force, to find something difficult

to imbue  (v): to inspire, as with feelings or opinions

occult (n): beyond the range of ordinary knowledge or understanding; mysterious

His influence on today’s writers may be as great as Shakespeare’s. A century and a half after his birth, he still shapes the English language.

William Butler Yeats (1865-1939) was born in Dublin on June 13, 1865. His father studied for the bar, practiced law briefly, and turned to art as his life-long profession.  He took up residence in London as a painter, but never succeeded in making enough money to fully support his family.  William’s mother came from a well-to-do family in Sligo.  William spent many childhood days at Sligo and loved the natural countryside beauty.  William was undoubtedly influenced by his father to pursue his artistic talents above all else, even family and economic concerns. William was a writer of verse since his teenage years. He lived, thought, and worked as a poet all his life.  Unlike his father who struggled to establish himself as a professional painter, William succeeded in fame and fortune as a poet.

Yeats’ early poems are imbued with images from the legends of Celtic mythology. The poetry of his middle years were influenced by his unrequited love for the revolutionary Maude Gonne and his involvement in the Irish Nationalist movement. The poems of his later years are more bleak and heavily influenced by the symbolism of the occult.

He founded Ireland’s first national theatre in 1901 in Dublin, before Ireland even became an independent nation. He wrote several plays that were performed there.  He became a senator of the Irish Free State in 1922 and he received the Nobel Prize for Literature in 1923. Yeats died in France in 1939.  In 1948 his remains were moved to Drum-cliff, near his beloved Sligo.

Brendan Kennelly, in his introduction to The Penguin Book of Irish Verse, explains why Yeats ranks as one of the greatest poets of the 20th century:

‘It is clear then that in nineteenth-century Ireland there was tremendous poetic energy.  Yet there was something lacking: a

centralising force, a unifying spirit.  W.B. Yeats, himself an important part of nineteenth-century poetry, was such a spirit.  He had more solid stamina than Ferguson, more fierce intensity than Mangan.  He had a vision for Ireland unequalled in her tradition, as well as the intelligence and energy to turn that vision into reality.  Carrying his experience of the nineteenth century and its mythology in his heart and head, he stepped into twentieth-century Ireland, a great poet with a great poet’s ideals.  Never did a country so badly need a poet.  Never did a poet work so tirelessly for his country.’

It’s hard to overstate just how pivotal a figure in English literature William Butler Yeats was – and remains.