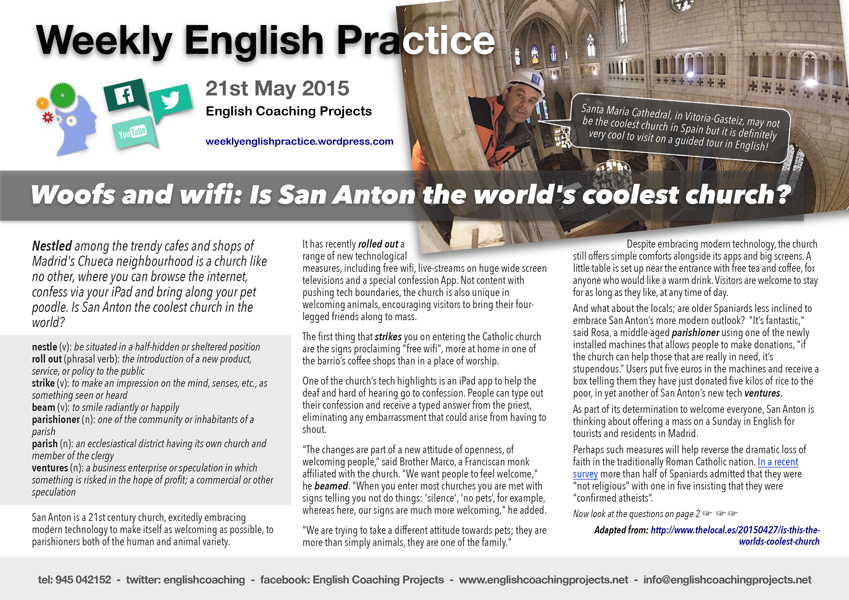 nestle (v): be situated in a half-hidden or sheltered position

roll out (phrasal verb): the introduction of a new product, service, or policy to the public

strike (v): to make an impression on the mind, senses, etc., as something seen or heard

parishioner (n): one of the community or inhabitants of a parish

parish (n): an ecclesiastical district having its own church and member of the clergy

ventures (n): a business enterprise or speculation in which something is risked in the hope of profit; a commercial or other speculation

Nestled among the trendy cafes and shops of Madrid’s Chueca neighbourhood is a church like no other, where you can browse the internet, confess via your iPad and bring along your pet poodle. Is San Anton the coolest church in the world?

San Anton is a 21st century church, excitedly embracing modern technology to make itself as welcoming as possible, to parishioners both of the human and animal variety.

It has recently rolled out a range of new technological measures, including free wifi, live-streams on huge wide screen televisions and a special confession App. Not content with pushing tech boundaries, the church is also unique in welcoming animals, encouraging visitors to bring their four-legged friends along to mass.

The first thing that strikes you on entering the Catholic church are the signs proclaiming “free wifi”, more at home in one of the barrio’s coffee shops than in a place of worship.

One of the church’s tech highlights is an iPad app to help the deaf and hard of hearing go to confession. People can type out their confession and receive a typed answer from the priest, eliminating any embarrassment that could arise from having to shout.

“The changes are part of a new attitude of openness, of welcoming people,” said Brother Marco, a Franciscan monk affiliated with the church. “We want people to feel welcome,” he beamed. “When you enter most churches you are met with signs telling you not do things: ‘silence’, ‘no pets’, for example, whereas here, our signs are much more welcoming,” he added.

“We are trying to take a different attitude towards pets; they are more than simply animals, they are one of the family.”

Despite embracing modern technology, the church still offers simple comforts alongside its apps and big screens. A little table is set up near the entrance with free tea and coffee, for anyone who would like a warm drink. Visitors are welcome to stay for as long as they like, at any time of day.

And what about the locals; are older Spaniards less inclined to embrace San Anton’s more modern outlook?  “It’s fantastic,” said Rosa, a middle-aged parishioner using one of the newly installed machines that allows people to make donations, “if the church can help those that are really in need, it’s stupendous.” Users put five euros in the machines and receive a box telling them they have just donated five kilos of rice to the poor, in yet another of San Anton’s new tech ventures.

As part of its determination to welcome everyone, San Anton is thinking about offering a mass on a Sunday in English for tourists and residents in Madrid.

Perhaps such measures will help reverse the dramatic loss of faith in the traditionally Roman Catholic nation. In a recent survey more than half of Spaniards admitted that they were “not religious” with one in five insisting that they were “confirmed atheists”.