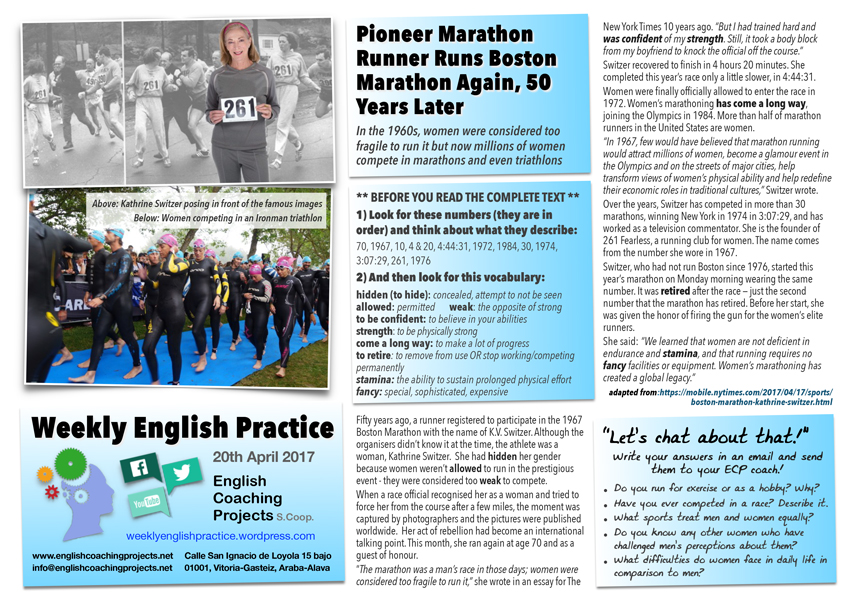 In the 1960s, women were considered too fragile to run it but now millions of women compete in marathons and even triathlons

** BEFORE YOU READ THE COMPLETE TEXT **

1) Look for these numbers (they are in order) and think about what they describe:

2) And then look for this vocabulary:

hidden (to hide): concealed, attempt to not be seen

allowed: permitted       weak: the opposite of strong

to be confident: to believe in your abilities

strength: to be physically strong

come a long way: to make a lot of progress

to retire: to remove from use OR stop working/competing permanently

Fifty years ago, a runner registered to participate in the 1967 Boston Marathon with the name of K.V. Switzer. Although the organisers didn’t know it at the time, the athlete was a woman, Kathrine Switzer.  She had hidden her gender because women weren’t allowed to run in the prestigious event – they were considered too weak to compete.

When a race official recognised her as a woman and tried to force her from the course after a few miles, the moment was captured by photographers and the pictures were published worldwide.  Her act of rebellion had become an international talking point. This month, she ran again at age 70 and this time she was the guest of honour.

“The marathon was a man’s race in those days; women were considered too fragile to run it,” she wrote in an essay for The New York Times 10 years ago. “But I had trained hard and was confident of my strength. Still, it took a body block from my boyfriend to knock the official off the course.”

Switzer recovered to finish in 4 hours 20 minutes. She completed this year’s race only a little slower, in 4:44:31.

Women were finally officially allowed to enter the race in 1972. Women’s marathoning has come a long way, joining the Olympics in 1984. More than half of marathon runners in the United States are women.

“In 1967, few would have believed that marathon running would attract millions of women, become a glamour event in the Olympics and on the streets of major cities, help transform views of women’s physical ability and help redefine their economic roles in traditional cultures,” Switzer wrote.

Over the years, Switzer has competed in more than 30 marathons, winning New York in 1974 in 3:07:29, and has worked as a television commentator. She is the founder of 261 Fearless, a running club for women. The name comes from the number she wore in 1967.

Switzer, who had not run Boston since 1976, started this year’s marathon on Monday morning wearing the same number. It was retired after the race — just the second number that the marathon has retired. Before her start, she was given the honor of firing the gun for the women’s elite runners.

She said: “We learned that women are not deficient in endurance and stamina, and that running requires no fancy facilities or equipment. Women’s marathoning has created a global legacy.”