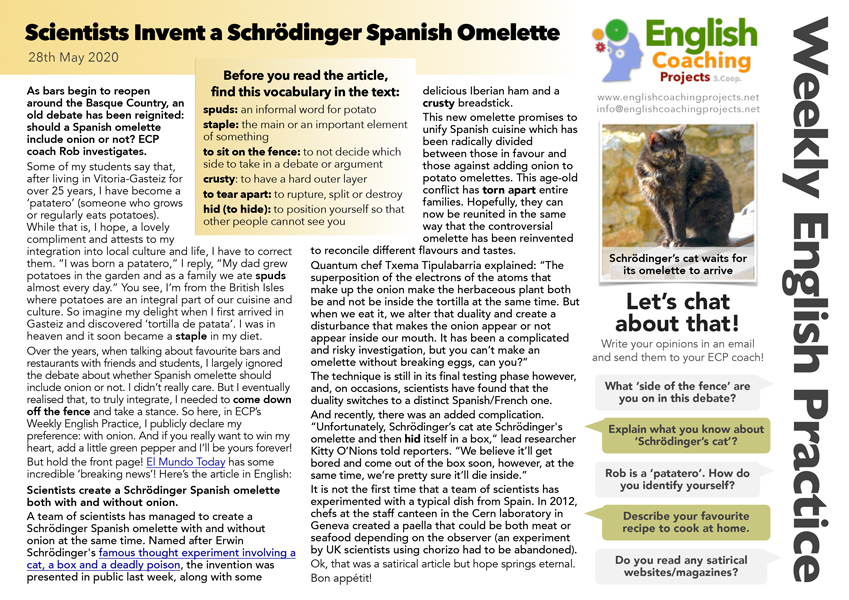 Breaking news! Scientists create a Schrödinger Spanish omelette both with and without onion. Spanish cuisine can finally be reunited after decades of conflict.

spuds: an informal word for potato

staple: the main or an important element of something

to sit on the fence: to not decide which side to take in a debate or argument

crusty: to have a hard outer layer

to tear apart: to rupture, split or destroy

hid (to hide): to position yourself so that other people cannot see you

As bars begin to reopen around the Basque Country, an old debate has been reignited: should a Spanish omelette include onion or not? ECP coach Rob investigates.

Some of my students say that, after living in Vitoria-Gasteiz for over 25 years, I have become a ‘patatero’ (someone who grows or regularly eats potatoes). While that is, I hope, a lovely compliment and attests to my integration into local culture and life, I have to correct them. “I was born a patatero,” I reply, “My dad grew potatoes in the garden and as a family we ate spuds almost every day.” You see, I’m from the British Isles where potatoes are an integral part of our cuisine and culture. So imagine my delight when I first arrived in Gasteiz and discovered ‘tortilla de patata’. I was in heaven and it soon became a staple in my diet.

Over the years, when talking about favourite bars and restaurants with friends and students, I largely ignored the debate about whether Spanish omelette should include onion or not. I didn’t really care. But I eventually realised that, to truly integrate, I needed to come down off the fence and take a stance. So here, in ECP’s Weekly English Practice, I publicly declare my preference: with onion. And if you really want to win my heart, add a little green pepper and I’ll be yours forever!

But hold the front page! El Mundo Today has some incredible ‘breaking news’! Here’s the article in English:

Scientists create a Schrödinger Spanish omelette both with and without onion.

A team of scientists has managed to create a Schrödinger Spanish omelette with and without onion at the same time. Named after Erwin Schrödinger’s famous thought experiment involving a cat, a box and a deadly poison, the invention was presented in public last week, along with some delicious Iberian ham and a crusty breadstick.

This new omelette promises to unify Spanish cuisine which has been radically divided between those in favour and those against adding onion to potato omelettes. This age-old conflict has torn apart entire families. Hopefully, they can now be reunited in the same way that the controversial omelette has been reinvented to reconcile different flavours and tastes.

Quantum chef Txema Tipulabarria explained: “The superposition of the electrons of the atoms that make up the onion make the herbaceous plant both be and not be inside the tortilla at the same time. But when we eat it, we alter that duality and create a disturbance that makes the onion appear or not appear inside our mouth. It has been a complicated and risky investigation, but you can’t make an omelette without breaking eggs, can you?”

The technique is still in its final testing phase however, and, on occasions, scientists have found that the duality switches to a distinct Spanish/French one.

And recently, there was an added complication. “Unfortunately, Schrödinger’s cat ate Schrödinger’s omelette and then hid itself in a box,” lead researcher Kitty O’Nions told reporters. “We believe it’ll get bored and come out of the box soon, however, at the same time, we’re pretty sure it’ll die inside.”

It is not the first time that a team of scientists has experimented with a typical dish from Spain. In 2012, chefs at the staff canteen in the Cern laboratory in Geneva created a paella that could be both meat or seafood depending on the observer (an experiment by UK scientists using chorizo had to be abandoned).

Ok, that was a satirical article but hope springs eternal. Bon appétit!