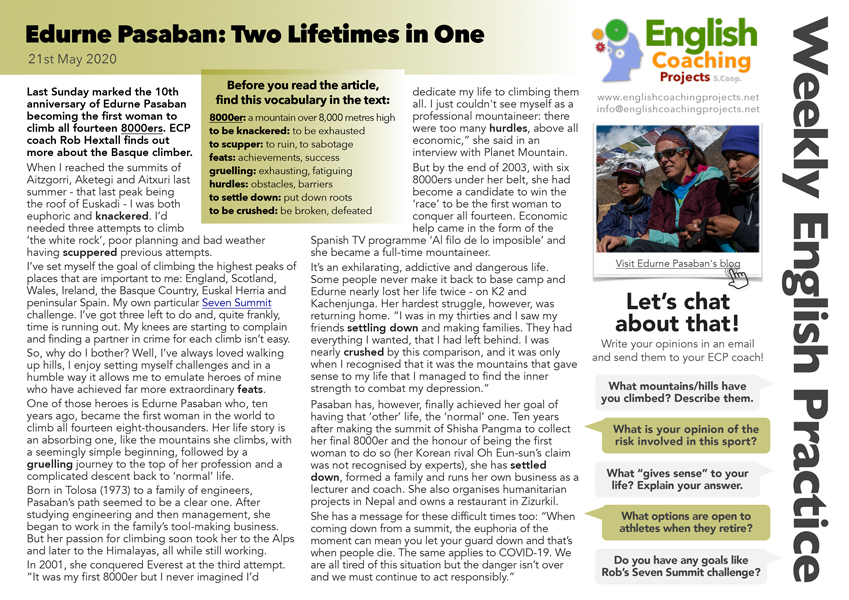 to be knackered: to be exhausted

to scupper: to ruin, to sabotage

to settle down: put down roots

to be crushed: be broken, defeated

When I reached the summits of Aitzgorri, Aketegi and Aitxuri last summer – that last peak being the roof of Euskadi – I was both euphoric and knackered. I’d needed three attempts to climb ‘the white rock’, poor planning and bad weather having scuppered previous attempts.

I’ve set myself the goal of climbing the highest peaks of places that are important to me: England, Scotland, Wales, Ireland, the Basque Country, Euskal Herria and peninsular Spain. My own particular Seven Summit challenge. I’ve got three left to do and, quite frankly, time is running out. My knees are starting to complain and finding a partner in crime for each climb isn’t easy.

So, why do I bother? Well, I’ve always loved walking up hills, I enjoy setting myself challenges and in a humble way it allows me to emulate heroes of mine who have achieved far more extraordinary feats.

One of those heroes is Edurne Pasaban who, ten years ago, became the first woman in the world to climb all fourteen eight-thousanders. Her life story is an absorbing one, like the mountains she climbs, with a seemingly simple beginning, followed by a gruelling journey to the top of her profession and a complicated descent back to ‘normal’ life.

Born in Tolosa (1973) to a family of engineers, Pasaban’s path seemed to be a clear one. After studying engineering and then management, she began to work in the family’s tool-making business. But her passion for climbing soon took her to the Alps and later to the Himalayas, all while still working.

In 2001, she conquered Everest at the third attempt. “It was my first 8000er but I never imagined I’d dedicate my life to climbing them all. I just couldn’t see myself as a professional mountaineer: there were too many hurdles, above all economic,” she said in an interview with Planet Mountain.

But by the end of 2003, with six 8000ers under her belt, she had become a candidate to win the ‘race’ to be the first woman to conquer all fourteen. Economic help came in the form of the Spanish TV programme ‘Al filo de lo imposible’ and she became a full-time mountaineer.

It’s an exhilarating, addictive and dangerous life. Some people never make it back to base camp and Edurne nearly lost her life twice – on K2 and Kachenjunga. Her hardest struggle, however, was returning home. “I was in my thirties and I saw my friends settling down and making families. They had everything I wanted, that I had left behind. I was nearly crushed by this comparison, and it was only when I recognised that it was the mountains that gave sense to my life that I managed to find the inner strength to combat my depression.”

Pasaban has, however, finally achieved her goal of having that ‘other’ life, the ‘normal’ one. Ten years after making the summit of Shisha Pangma to collect her final 8000er and the honour of being the first woman to do so (her Korean rival Oh Eun-sun’s claim was not recognised by experts), she has settled down, formed a family and runs her own business as a lecturer and coach. She also organises humanitarian projects in Nepal and owns a restaurant in Zizurkil.

She has a message for these difficult times too: “When coming down from a summit, the euphoria of the moment can mean you let your guard down and that’s when people die. The same applies to COVID-19. We are all tired of this situation but the danger isn’t over and we must continue to act responsibly.”