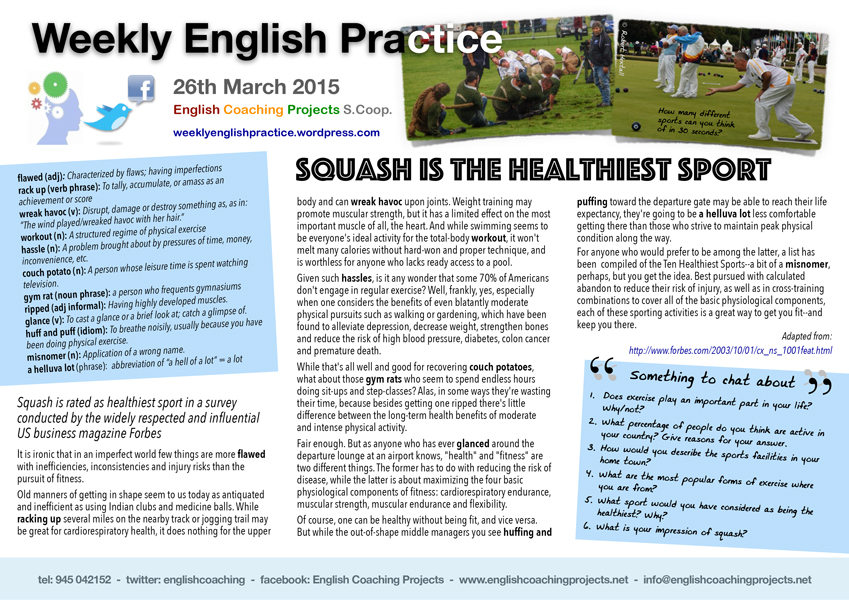 rack up (verb phrase): To tally, accumulate, or amass as an achievement or score

wreak havoc (v): Disrupt, damage or destroy something as, as in: “The wind played/wreaked havoc with her hair.”

hassle (n): A problem brought about by pressures of time, money, inconvenience, etc.

glance (v): To cast a glance or a brief look at; catch a glimpse of.

huff and puff (idiom): To breathe noisily, usually because you have been doing physical exercise.

It is ironic that in an imperfect world few things are more flawed with inefficiencies, inconsistencies and injury risks than the pursuit of fitness.

Old manners of getting in shape seem to us today as antiquated and inefficient as using Indian clubs and medicine balls. While racking up several miles on the nearby track or jogging trail may be great for cardiorespiratory health, it does nothing for the upper body and can wreak havoc upon joints. Weight training may promote muscular strength, but it has a limited effect on the most important muscle of all, the heart. And while swimming seems to be everyone’s ideal activity for the total-body workout, it won’t melt many calories without hard-won and proper technique, and is worthless for anyone who lacks ready access to a pool.

Given such hassles, is it any wonder that some 70% of Americans don’t engage in regular exercise? Well, frankly, yes, especially when one considers the benefits of even blatantly moderate physical pursuits such as walking or gardening, which have been found to alleviate depression, decrease weight, strengthen bones and reduce the risk of high blood pressure, diabetes, colon cancer and premature death.

While that’s all well and good for recovering couch potatoes, what about those gym rats who seem to spend endless hours doing sit-ups and step-classes? Alas, in some ways they’re wasting their time, because besides getting one ripped there’s little difference between the long-term health benefits of moderate and intense physical activity.

Fair enough. But as anyone who has ever glanced around the departure lounge at an airport knows, “health” and “fitness” are two different things. The former has to do with reducing the risk of disease, while the latter is about maximizing the four basic physiological components of fitness: cardiorespiratory endurance, muscular strength, muscular endurance and flexibility.

Of course, one can be healthy without being fit, and vice versa. But while the out-of-shape middle managers you see huffing and puffing toward the departure gate may be able to reach their life expectancy, they’re going to be a helluva lot less comfortable getting there than those who strive to maintain peak physical condition along the way.

For anyone who would prefer to be among the latter, a list has been  compiled of the Ten Healthiest Sports–a bit of a misnomer, perhaps, but you get the idea. Best pursued with calculated abandon to reduce their risk of injury, as well as in cross-training combinations to cover all of the basic physiological components, each of these sporting activities is a great way to get you fit–and keep you there.