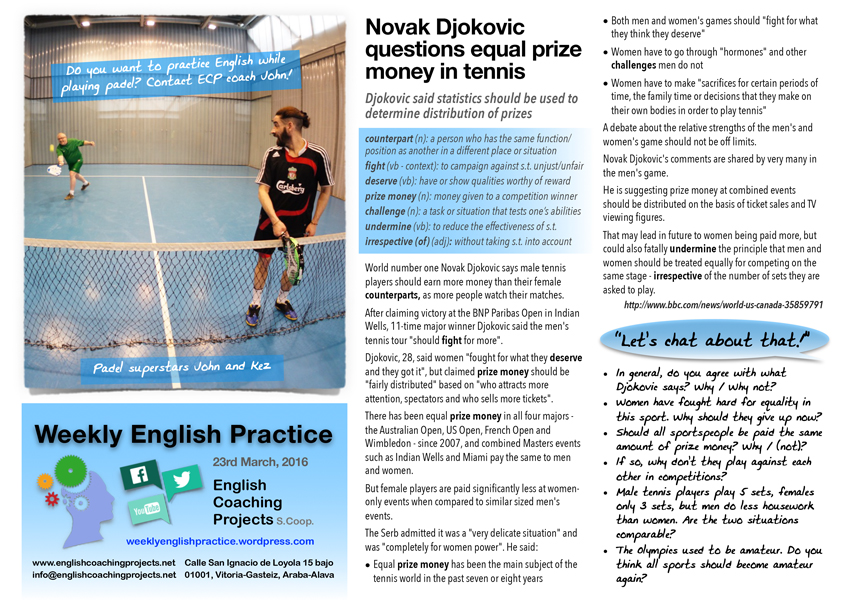 Djokovic said statistics should be used to determine distribution of prizes

counterpart (n): a person who has the same function/position as another in a different place or situation

deserve (vb): have or show qualities worthy of reward

prize money (n): money given to a competition winner

challenge (n): a task or situation that tests one’s abilities

undermine (vb): to reduce the effectiveness of s.t.

Djokovic, 28, said women “fought for what they deserve and they got it”, but claimed prize money should be “fairly distributed” based on “who attracts more attention, spectators and who sells more tickets”.

There has been equal prize money in all four majors – the Australian Open, US Open, French Open and Wimbledon – since 2007, and combined Masters events such as Indian Wells and Miami pay the same to men and women.

The Serb admitted it was a “very delicate situation” and was “completely for women power”. He said:

A debate about the relative strengths of the men’s and women’s game should not be off limits.

Novak Djokovic’s comments are shared by very many in the men’s game.

He is suggesting prize money at combined events should be distributed on the basis of ticket sales and TV viewing figures.

That may lead in future to women being paid more, but could also fatally undermine the principle that men and women should be treated equally for competing on the same stage – irrespective of the number of sets they are asked to play.